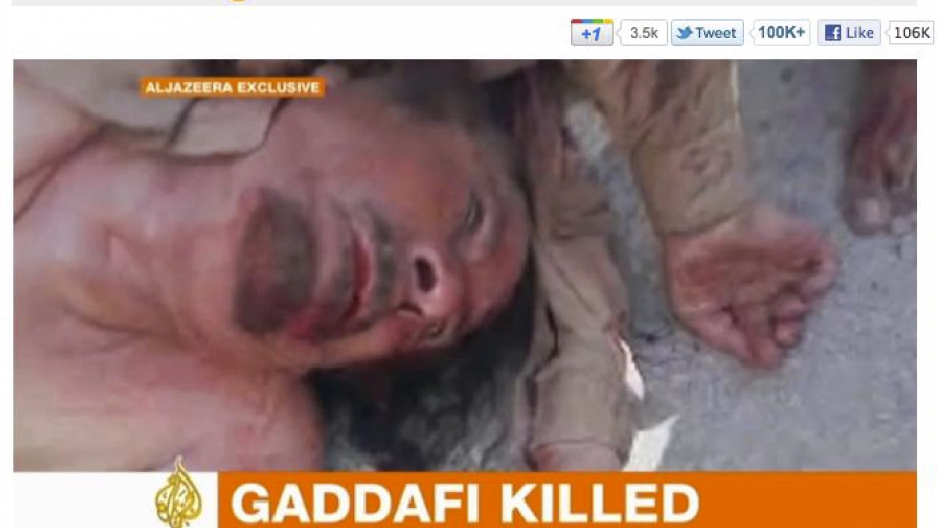 A screen grab from Al Jazeera of a video said to show Muammar Gaddafi's body. Gaddafi is dead after being wounded during his capture in Sirte, Libya, on October 20, 2011, according to unconfirmed reports.
Share

Military spokesperson Ibrahim Beitalmal told the AP that a Gaddafi nephew read a prayer before the bodies were given for burial.

Gaddafi's son Mutassim and his defence minister, Abu Bakr Younis, were buried at the saem time, according to the Guardian.

Eighteen relatives of Gaddafi, his son and the defense minister were allowed to attend the funeral, The New York Times states. Images taken before the burial showed the three bodies wrapped in white shrouds and kept in wood coffins.

Libyan officials have said they plan on keeping the burial location a secret, the Times reports.

Officials of the Transitional National Council, the interim government, had said they would not disclose the location of the grave, fearing that it would be desecrated or become a shrine for supporters of Colonel Qaddafi, who was killed last Thursday. The three men were among those seized by Misurata-based fighters in Surt, the colonel’s home town on the Mediterranean coast, where he had fled for refuge after the rebellion that toppled him in August.

Gaddafi's body was removed from a cold storage unit in Misrata late on Monday, Al Jazeera reports, citing eye witnesses who entered the freezer and saw it empty.

The question of what to do with the corpse, which had been on public display in Misrata, became increasingly urgent as decomposition set in. A National Transitional Council official told Reuters on Monday night that "the corpse cannot last any longer".

According to Islamic tradition, Gaddafi should have been buried within 24 hours of his death. Yet the issue was complicated by calls for a full autopsy to establish the circumstances of his death.

The NTC had been in negotiations with Gaddafi's relatives over possibly returning his body to his tribe, reports the Guardian. However, "no agreement was reached for his tribe to take him," an NTC official told Reuters.

The burial site was also a contentious issue, says the BBC, since a marked grave could become a focus for either vandalism or veneration.

The solution would be "an unknown location in the open desert," an NTC official said Monday.