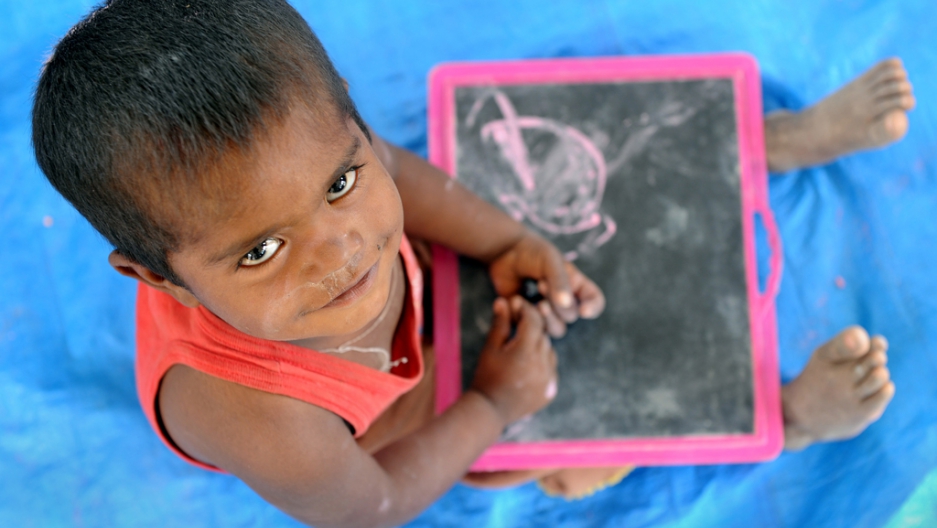 NEW DELHI, India — In a typical Delhi slum, sewage overflows from the drain alongside the street and scraps of colored paper and empty bottles tumble in the foul wind. Here and there, a spindly boy in threadbare briefs fetches water from the hand-pump and a baby, her eyes blacked with kohl, plays happily in the grime.

It's not an easy place to live. But even here, Ramesh Singh, a bicycle rickshaw driver, opted to send his son, Dhiraj, to a bare-bones private school when a pilot program for school vouchers gave him the chance several years ago.

“You saw when the teacher tested him,” Ramesh said. “He finished class three in government school, and he can't read anything!”

Read more: India gets kids to school but fails to teach

Rich or poor, Indians are abandoning the country's disastrously managed government-run schools in droves. Only about two-thirds of India's school-age children attend classes at all, and the fierce competition for places at private institutes means that waiting lists are enormous and it's difficult to win admission to any without pulling strings.

More discouraging still, because of its demographics India will need to build another 250,000 schools to meet its goal of universal enrollment by 2015. But that means there's a big opportunity, as well, some investors believe: India could well be the first country in the modern world where the business of educating kids from kindergarten through high school is, well, a business. Meet the would-be chain store of education: the Indus World School (IWS).

The school that Ramesh chose for Dhiraj, called R.S. Public School in homage to the legacy of Eton and Harrow, was not part of IWS or any other big corporation. When I visited the place, the paint was crumbling off the concrete walls. Its barred windows give it an aspect more penal than pedantic, and the children in the courtyard were forced to squint and shield their eyes against a fine grit whipped across the compound by the wind.

Still, at $6 a month, it cost less than the voucher that Ramesh received as part of a pilot program run by the Center for Civil Society, and the teachers actually showed up for work. Corporation-run chain schools would institute higher standards — perhaps even pioneering the franchise model in education.

"India needs entrepreneurs and organizations who are willing to build a scalable execution model of schools," said Satya Narayanan, chairman of Career Launcher. "In terms of numbers, these could translate into a chain of hundreds of schools over a five to seven year period."

With 14 schools in operation, mostly in second-tier cities but also including five rural schools, Indus World School has made a good start.

More: In India, plagiarism is on the rise

Earlier this year, the company secured second round financing from Gaja Capital Partners and sold an additional, undisclosed stake to Housing Development Finance Corp. for around $10 million — suggesting that the snowball is beginning to roll downhill. According to Narayanan, IWS hopes to operate 75 schools with over 40,000 students in five years time, which could pave the way for a wave of followers.

According to the entrepreneur, at least a dozen of India's large corporations are discussing similar ventures or investments. But the blue ocean market — 250,000 schools! — means he won't need to worry much about competition for bodies.

Nevertheless, Narayanan aims to make sure innovation isn't limited to the business model.

The company is steadily developing its own intellectual property for the curriculum, with a focus on age-appropriate linkages to career aspirations and higher education goals — music to the ears of middle-class Indian parents.

And the connection with Career Launcher — a test prep and college admissions advisory company that serves 100,000 from 225 outlets — ensures that IWS understands its target customers and their goals.

Can for-profit chain schools really step in where the state has failed — especially for students like Dhiraj Singh, whose parents can't afford to pay more than a pittance?

Studies of tiny, grassroots private schools and school vouchers suggest that the answer may be yes. So far IWS, like most elite Indian schools, offers scholarships for only a few hundred students. But the gathering momentum of the country's recently passed Right to Education law (RTE) could free up funds for private players.

"The RTE needs to be given an operating framework from the current 'intent' state," said Narayanan. "We can contribute immensely to [uplifting the poor] in just a generation if we can implement RTE smartly!"