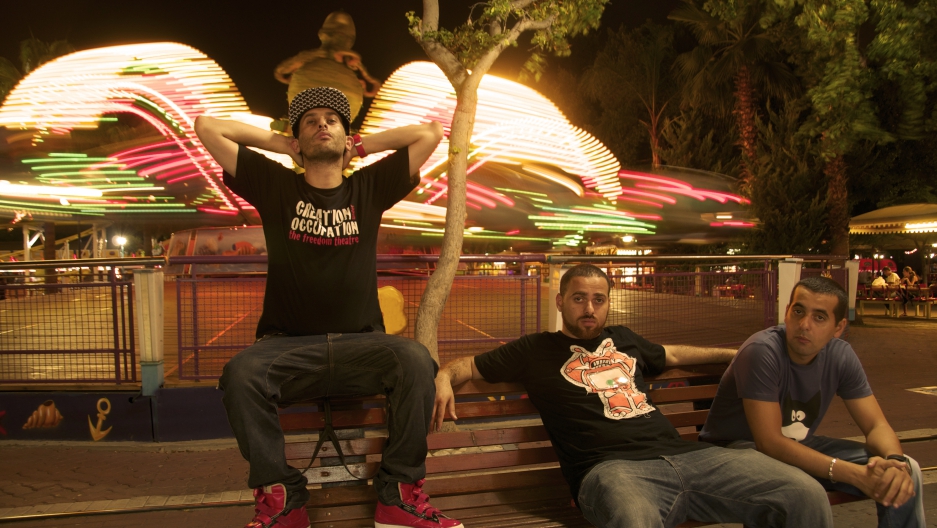 Tamer Nafar, Suhell Nafar, and Mahmoud Jreri of DAM, the first Palestinian hip-hop crew and among the first to rap in Arabic, have been hailed as the soundtrack of Palestinian resistance.
Credit: DAM
Share

TEL AVIV, Israel — In 1970, over a steady drumbeat and the slow stream of a saxophone, the late Gil Scott-Heron said six immortal words and helped kick-start a genre later known as rap: “The revolution will not be televised.”

Now, Tamer Nafar, lead singer of the Palestinian hip-hop group DAM, says that, “Rap is CNN for us, the Palestinian people. In every village, in every town, in every city — in Israel, Gaza, the West Bank — people are doing hip-hop.”

It all started in the mid-1990s, when Tamer Nafar, then a teenager, started watching music videos by the late American rap legend Tupac. What he saw on the screen — the grimy, crime-ridden streets of Los Angeles — looked all too familiar: it looked like home.

Tamer hails from Lod, Israel’s most notorious ghetto; and though only a 20-minute drive from the tree-lined boulevards of Tel Aviv, the area’s narrow, gray streets — lined with graffiti, broken glass, and crumbling houses — couldn’t seem farther. Safety was a luxury foreign to Lod, and during Tamer’s childhood, neighborhood stabbings were routine and shootings were on the rise.

Israel: Politics behind the prisoner swap

But it wasn’t just the poverty and violence that Tamer recognized in Tupac’s lyrics, it was also the discrimination and racism. Both were minorities living among a majority, Tupac as an African-American in what he called “A White Man’s World” and Tamer as a Palestinian in Israel.

Listening to the music, Tamer began to see rap as a way to resist the tough reality of where he lived. He started writing, throwing down beats, and telling his family and friends that he wanted to be a rapper.

A couple of years later, however, he had become serious and was performing solo in the then small but burgeoning Israeli rap scene, making a name for himself and even sharing the stage with Jewish Israeli artists.

“It was a family scene,” he said. “But it wasn’t political. It was for nice things like peace and all that shit. But it wasn’t about reality.”

In 1999, Tamer’s younger brother Suhell and their friend Mahmoud Jreri, also from Lod, got on the hip-hop bandwagon, and the three started DAM — which means eternity in Arabic, blood in Hebrew, and stands for “Da Arabian MCs” in English. The first Palestinian rap crew and among the trailblazers of early Arab rap, DAM overlaid hip-hop beats with Arabic melodies, producing what sounded like a fresh take on 90s gangster rap, with lyrics that brought their music back to the genre’s 1970’s roots: protest.

“We opened our mouths,” Suhell said, “we got with reality” — and it wasn’t a pretty picture. The Second Intifada erupted in September 2000 and violence between Israelis and Palestinians rose to heights unseen in years — claiming, by some estimates, thousands of Palestinian and Israeli lives.

More: The end of Israel as we know it?

Racism between the two groups was as vicious as ever and DAM had something to say about it. Taking a line from American rapper DMX, Tamer explained, “We wanted to tell Israelis, ‘walk in our shoes, and you’ll hurt your feet.’” Arming themselves with words, DAM called for people to walk in the Palestinians’ shoes before judging the rock-throwing youth of the uprising.

In 2000, they released their first single “Innocent Criminals,” recorded in Hebrew over the beat of Tupac’s “Hail Mary.” And a few months later came DAM’s big break, “Mein Erhabi” (Who is the terrorist?). The lyrics, rapped in Arabic, were the kind rarely heard in popular culture at the time:

You jump to say
"You let small children throw stones!
Don’t they have parents to keep them at home?"
WHAT?!
You must have forgotten you buried our parents under the rubble of our homes
And now while my agony is so immense
You call me a terrorist?

Palestinians went wild with praise and some Israelis went wild with rage, accusing DAM of supporting terrorism and siding with suicide bombers. Subliminal, Israel’s most popular rapper and a former friend of Tamer, was livid: “This fuck got up on TV and said: ‘The guy that blew himself up? I can identify with him,’” he told The Guardian. “You wanna talk about the Zionist enemy, homie? Well here I am.”

With DAM in the spotlight, the track went viral and was downloaded over a million times after its online release — quite a feat for a hardly known D.I.Y. rap group with no record deal. Rolling Stone in France then distributed the song for free in one of its issues, and Le Monde heralded DAM as “the voice of a new generation.” Soon, DAM was not just a household name among Palestinians; their music was becoming the anthem of frustrated youth throughout the Middle East, and beyond.

Ten years and two albums later, DAM is still the Palestinian soundtrack to resistance, only better known. They have made several tours of North America and Europe, where they have performed with the likes of Talib Kweli, Michael Franti, and Dead Prez, and have gained the attention of the liberal-minded university crowd. And even some of the hip-hop greats themselves — the very artists that got them hooked on hip-hop in the first place — have taken note.

“When we were in Brooklyn a few years ago, we met Chuck D,” Tamer said, cracking a rare smile. “We got the King’s blessing.”

They also got Hollywood’s blessing. DAM’s story premiered at Sundance Film Festival in 2008, where it was the subject of the award-winning documentary “Slingshot Hip Hop,” which traces the birth and growth of Palestinian hip-hop, from Lod to the budding artists who have followed in DAM’s footsteps.

Despite their fame, Tamer, Suhell and Mahmoud all still live in Lod and they say their commitment to the Palestinian reality remains as strong as ever. While they write and rap about Palestinians living in the territories, much of their work also focuses on Palestinians, like them, who remained in Israel after the state’s establishment in 1948.

Today numbering more than 1.2 million — compared with the 4 million Palestinians living in the West Bank and Gaza — Arab-Israelis face a harsh reality. Structural inequality, unemployment and crime are constant threats and, according to a 2009 report by the Organization for Economic Cooperation, Arab-Israelis, who today make up 20 percent of Israel, face a poverty rate of about 50 percent. DAM’s hometown of Lod remains the country’s drug and murder capital, which, last year, Prime Minister Benjamin Netanyahu compared to the “Wild West” of Israel.

The Arab-Israeli problem doesn’t end there. Palestinians living in Israel face discrimination not only at home, but also by the greater Arab community, who see them as traitors for living in the Jewish state.

But if he is a citizen of Israel, he only sees himself as a second-class citizen. “Having an Israeli passport means nothing,” he said. “When I go to the airport, they still think I am a terrorist. It doesn’t matter what you call us, we live in a racist country.”

And racism against Arabs in Israel appears to be on the rise.

A fanatical group known as the “price-taggers” torched and vandalized a mosque in the northern Arab Israeli village of Tuba Zangaria in early October. And a few days later, on Yom Kippur, Christian and Muslim tombstones were defaced on in a cemetery in Jaffa, the ancient port city that today comprises the greater metropolitan area of Tel Aviv and has a sizeable Arab population.

The blows came one month after the Knesset approved the “Nakba Bill,” which bans publicly-funded organizations from commemorating the Nakba (translated literally as “the catastrophe”), a term used by Palestinians to mark the day when more than 700,000 Arabs were forcibly removed to create the state of Israel in 1948. Heavily criticized by the Israeli left and civil rights groups, the law is considered a reflection of the government’s growing fear of Palestinian history being made public and, according to Ha’aretz, Israel’s leading newspaper, one that “encourages the instigators of racism” and is “designed to shut people up.”

DAM, however, has refused to shut up. Tamer said: “Real rap criticizes anyone who denies freedom.”