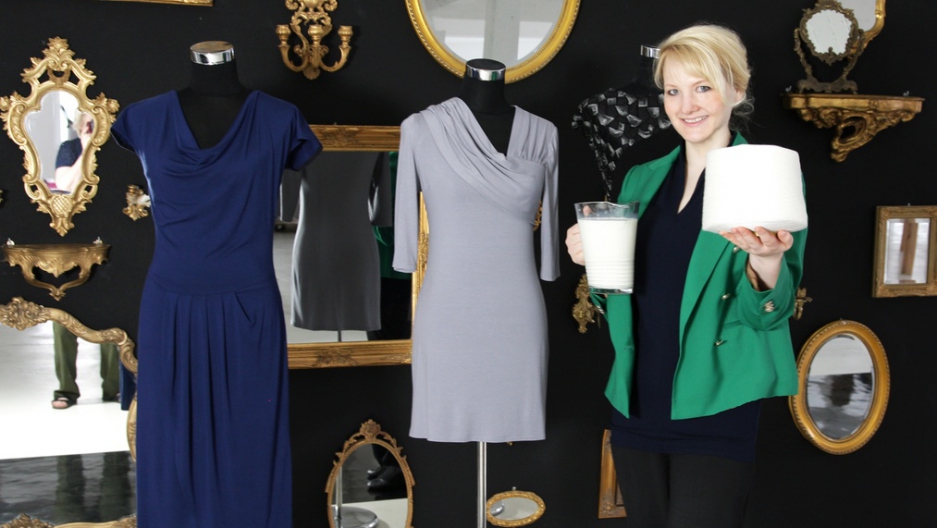 BERLIN, Germany — During her high school years, German fashion designer and microbiologist Anka Domaske spent a year on a cow farm in Idaho.

Milking cows wasn’t exactly her forte. But later, her experience doing so would inspire success.

Along with a small research team at the Fiber Institute at the University of Bremen, Domaske has invented the world’s first man-made, industrial-strength fiber using raw milk materials.

From this first innovation, the team has produced a second: organic, chemical-free clothing.

Manufactured through an environmentally friendly process, Domaske’s fiber, called Qmilch, is revolutionizing green fashion, or, as she calls it, “conscious clothing.”

The fiber is a means to provide lower-cost, sustainable clothing at a time when chemical-based production of products, including clothing, has come under scrutiny.

Qmilch clothing is anti-allergy, antibacterial and, as an added bonus, helps prevent aging in people who wear it.

As a result, Qmilch has an exceptionally smooth fiber surface that feels much like silk to the touch. It’s also biodegradable.

“The textile industry is looking for resource-efficient fiber productions that are economical and ecological without loss of material performance,” said Lars Bostan of the Fiber Institute, where the fiber was developed. “So the Qmilch fiber could replace existing fiber materials.”

Born in East Germany, 28-year-old Domaske was the great-granddaughter of a milliner and, she says, fashion and design was in her blood. “We didn’t have a lot of materials, so we had to make things yourself,” she said.

But even as a young girl, Domaske also had a passion for science. At the age of 14, she won the prestigious Youth Research science competition in Germany.

After graduating from high school, Domaske ventured to Tokyo for a six-month stint where she designed her own line of T-shirts. But then, upon returning to Germany, Domaske settled for academia and enrolled in a microbiology program in Bremen. “I thought, one day you have to decide, you can’t do both,” she said.

But Domaske decided to marry the two, studying microbiology by day and designing clothing by night. “I didn’t live typical a college life — I couldn’t tell you then what a pub looked like,” Domaske said with a laugh.

When she graduated in 2009, Domaske decided to return to fashion. And then she heard about milk fiber.

People have used milk to make clothing since the 1930s, in a chemically treated process that takes up to 60 hours to process, Domaske said. But the oil-based fiber is costly and not eco-friendly.

“We thought, why not take a natural resource like milk and let it be natural by not using any chemicals,” said Domaske. “We were quite lucky that we only needed three years to invent the fiber. A lot of luck was involved.”

Her team in Bremen, which at the moment includes only six people, researched and developed a process that involves extracting the protein, casein, from milk. The protein is part of the 20 percent of cow’s milk that is unfit for human consumption, and is usually discarded as waste.

The casein is then mixed with other ingredients, like zinc and beeswax, heated up and fed through a machine to create the threads.

Currently, Domaske and her team are producing 2 kilograms of fiber per hour. Next year, their goal is to produce 560 tons for an increasingly number of interested clients. The Qmilch fiber costs only €20 per kg ($28 per kg).

Dividing her time among business ventures, the young entrepreneur bounces between the Qmilch lab in Bremen and her clothing line, Mademoiselle Chi Chi (MCC). She uses the thread in her women’s line, and plans to launch a similar line for men.

As an alternative to cotton, Qmilch has already garnered interest from the automotive industry for seating fabrics, as well as home textiles such as bedding and furniture, and practical clothing like T-shirts, robes, towels, socks and underwear.

She’s also been asked to produce a soft puppet for a premature baby.