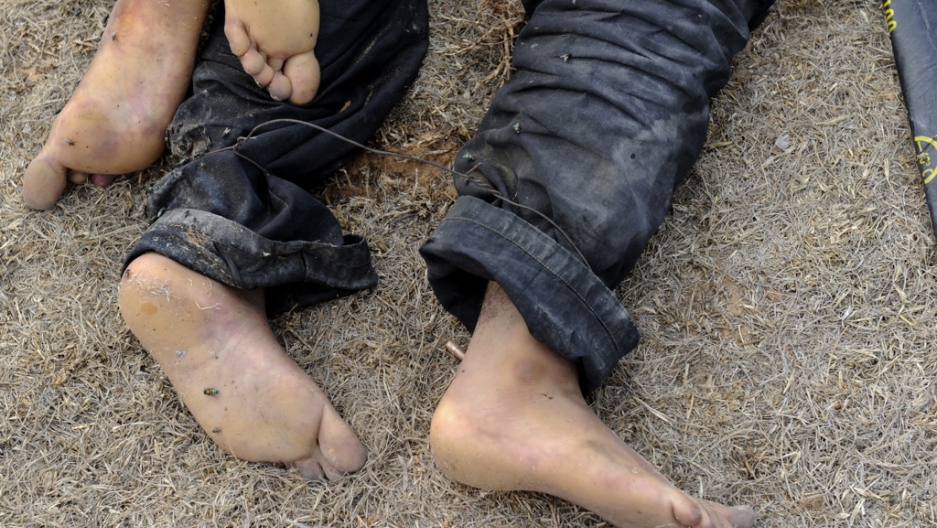 A picture shows the feet of men, believed to have been executed, lying dead in a field in the Libyan town of Sirte on October 22, 2011.
Credit: Philippe Desmazes
Share

The bodies of 53 loyalists of the Muammar Gaddafi regime were found after apparently being executed in a hotel in Sirte, a human rights group has announced.

“We found 53 decomposing bodies, apparently Gaddafi supporters, at an abandoned hotel in Sirte, and some had their hands bound behind their backs when they were shot,” Peter Bouckaert, emergencies director at Human Rights Watch, who investigated the killings, said in a press release.

The rights group called for an investigation into the findings.

"This requires the immediate attention of the Libyan authorities to investigate what happened and hold accountable those responsible," Bouckaert said.

The bodies were found on the grass in the garden of Hotel Mahari in District 2 of Sirte. They reportedly died about a week ago.

The bodies were found after Libyans took to the streets in cities across the country to celebrate the capture and killing of former dictator Gaddafi and the formal declaration that the country has been liberated.

Here are highlights of GlobalPost's coverage of Gaddafi's capture and killing.