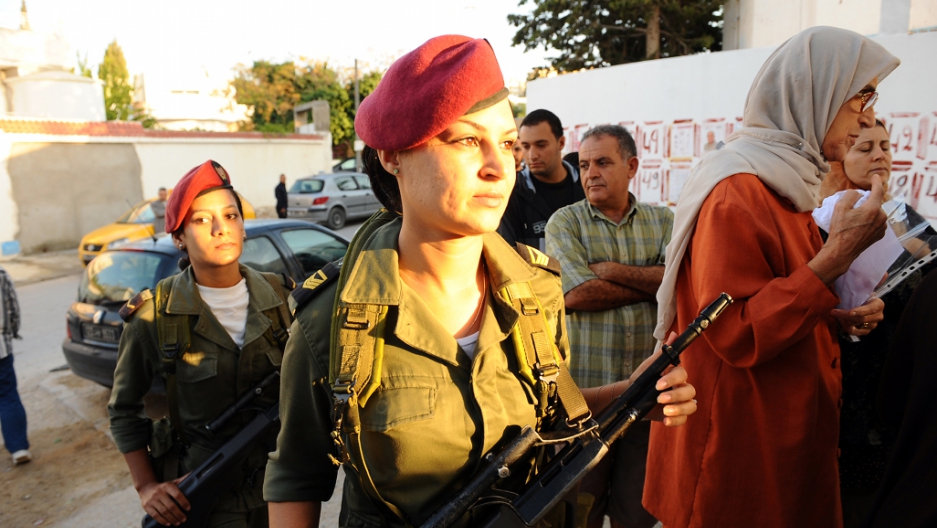 Tunisian security guard watches as Tunisians wait in line to vote on October 23, 2011, outside a polling station in Tunis.
Credit: Fethi Belaid
Share

ROMANI and EL KEF, Tunisia — In the rolling, landlocked countryside of northwest Tunisia, hundreds of miles from the country’s Mediterranean coastline and its cosmopolitan capital, Tunis, it's no surprise why Tunisian Islamists are leading the polls in this North African nation’s first elections today.

Jobless, jaded, and with the need for solid answers in uncertain times, the youth of Tunisia’s impoverished interior say they are finding solace in the coherent religious message of the Islamist Ennahda (Renaissance) party as they prepare to vote for the first genuine assembly in the country’s history.

“We will vote for Ennahda because they preach the word of God, and maybe God will have mercy on us,” said Hassan Omrani, 27, an unemployed resident of the northwest Tunisian village of Romani.

Nine months after a popular revolt ousted a decades-long dictator from power, Tunisia is headed to the polls today to elect a 217-member assembly tasked with writing the country’s new constitution and appointing a new interim government.

Ennahda, formed from a grassroots Islamist organization banned in the 1980s by then-Tunisian President Zine El Abidine Ben Ali, is now a formidable political party in the post-revolution period.

While its widespread support has rattled some of Tunisia’s more secular citizens, who fear it will roll back the rights of women, the Islamists are commanding respect for their sacrifices under the Ben Ali regime.

Calling for the protection of Tunisia’s “Arab and Islamic identity,” a new parliamentary system, and access to healthcare and infrastructure in the rural areas — in a way that resonates with unemployed young people here — Ennahda is polling at around 30 percent ahead of elections.

The most serious runner-up, the center-right and secular Progressive Democratic Party (PDP), is polling at just 15 percent.

Outside Tunis, the secular parties are faltering in their message.

“Ennahda worked underground for years, under government pressure,” said another of Romani’s unemployed residents, 39-year-old Lofti Hosni. “They were suppressed. So they know what hardship is like.”

Joblessness was the main catalyst for the Tunisian uprising from December to January, which kicked-off in the poverty-stricken central Tunisian town of Sidi Bouzid when a young fruit-seller set himself on fire outside a local government building.

Tunisia’s official unemployment rate stands at 19 percent, though it is believed to be much higher in some areas.
With party cadres in each region of each of Tunisia’s 24 governorates — the most widespread presence of any of Tunisia’s approximately 100 political parties — Ennahda is running an effective, populist-style campaign in the countryside.

“We didn’t concentrate on sending our message to the media, but concentrated on sending it the people,” said one Ennahda volunteer, who did not give his name, at the party headquarters in the poor western governorate of El Kef on the Algerian border. “We haven’t slept for a month.”

The operation center is a hive of activity the day before the elections, but its campaigners are confident and organized.

They have been trekking door-to-door across the governorate, home to some 260,000, in recent weeks, engaging with voters and answering their questions.

In contrast, the El Kef chapter of the Democratic Modernist Pole (PDM, its French acronym), a coalition of leftist parties pushing for the separation of religion and state, admitted to only going door-to-door to give flyers to residents in part of the governorate.

“The other parties are not reaching out to all of the regions. We have a designated person for each region, and it makes a huge difference,” said the chief of Ennahda’s El Kef campaign, 37-year-old Ibrahim Zoghlaamai.

He says the other parties lack a strong political platform and stress only their opposition to Ennahda’s Islamism.

“The other parties, they speak about their [political] programs, but only in relation to Ennahda,” he said.

His accusation appears to be true, at least in El Kef.

Officials from both the PDP and PDM struggled to answer some of the most basic questions about their plans for both the constitution and style of governance.

When PDP’s youth liaison, Foued Ben Arar, and PDM candidate Mounia Boukaaba, were asked together how they would each approach a specific economic or social problem in Tunisia, they said they “did not know,” because they had “never been in power.”

Boukaaba said PDM’s number one priority was to ensure the constitution separated Islam and the state, but could not name her party’s second most important issue.

Without clear policy prescriptions, many voters are pushed toward the more disciplined and self-assured Ennahda.

“We don’t know which parties are saying the truth. Some of them come here and they give us money so we will vote,” said 24-year-old Foued Mohammed from Romani. “But if I vote, I will vote for Ennahda.”