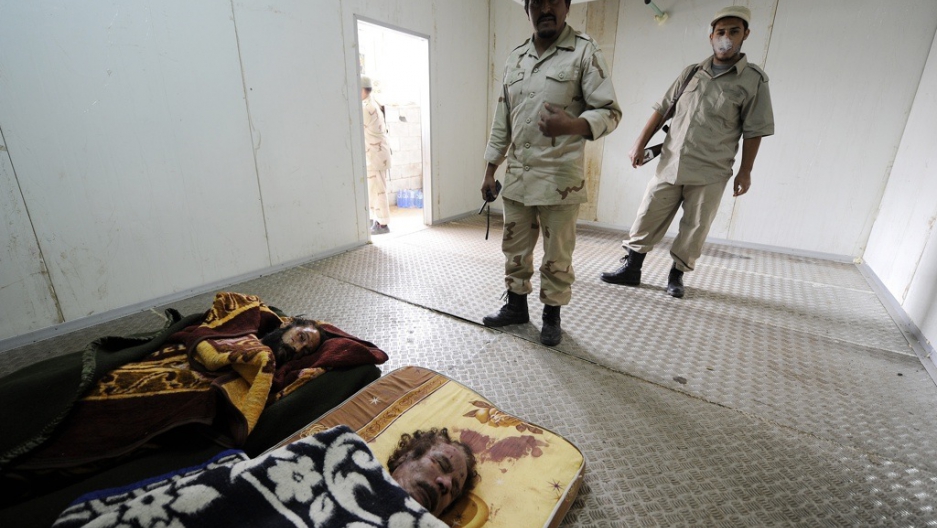 Libyan National Transitional Council (NTC) fighters stand guard next to the corpses of Libya's ex-strongman Muammar Gaddafi and his son Mutassim near a mosque on the outskirts of Misrata on Oct. 22, 2011.
Credit: Philippe Desmazes
Share

MISRATA, Libya — As Libya celebrates the beginning of a new era, and begins to look toward the future, the eyes of the world have instead turned toward the past, focusing in on the circumstances of Col. Muammar Gaddafi's initial capture and his subsequent death.

The official line on the day the dictator died was that he suffered fatal wounds during a gun battle in Sirte, his hometown. He died in a crossfire, the National Transitional Council, or NTC, announced. But as cell phone videos quickly began to emerge, so did questions.

Now, a rebel soldier who was at the scene, says that he witnessed Gaddafi's execution.

"When we arrived there we saw Gaddafi,” said Adam Abu Zaid, referring to the drain pipe where the rebel soldiers first found Gaddafi taking cover. “They caught him and they put him in the road and we just kicked him and kicked him and after that a guy with a gun killed him with one shot to his head. After that they took the body and we put it in an ambulance."

Abu Zaid, who lost three cousins during the war, said that kicking Gaddafi was cathartic for him and that he was happy the authoritarian leader of more than four decades was finally gone.

Video footage taken on mobile phones immediately after Gaddafi's capture appears to lend credence to the Abu Zaid's story. In the video Gaddafi can be seen being dragged, beaten and kicked. In one scene, in an exclusive video obtained by GlobalPost, a man appears to stab him in the thigh just moments after he was dragged from the hole. As he was pulled from his hiding place, there are clear signs he was heavily injured before capture. But whether those injuries were fatal remains under debate.

Videos and photos taken later, however, appear to show Gaddafi's body riddled with several bullet wounds, including one to the temple.

Shortly after his capture, one young fighter waved a gun around in front of a GlobalPost camera saying, “I would like to tell Gaddafi that this gun, your own gun, was what shot you in the leg.”

Gaddafi’s body is now on display in a freezer in Misrata alongside his son Muttasim. Crowds have been flocking to see this grisly attraction as a debate continues over where the former ruler should be buried. Misrata's chief forensic doctor told Al Arabiya TV on Saturday that autopsies would be conducted on both Gaddafi and his son.

A look at the body seems to confirm that Gaddafi was shot in the temple. Although most of his body remains covered, several photos taken show that he was also injured in the torso.

In an interview with GlobalPost on Friday, Ibrahim Betamal, a spokesman for the NTC, gave a whole other version of events.

“He was in a hole. There was fighting all around. He was alive at that time when they found him,” Betamal said. “When they took him to the car he was shot by one of his own snipers. He died from these wounds. They killed him to protect secrets.”

Betamal said that although Gaddafi may have been the highest authority among his people, he had information about several, major international crimes — including the Lockerbie bombing and the conflict in Chad.

“There are many things no one knows — only Gaddafi. I believe this sniper was placed with Gaddafi to kill him if he was captured,” he said.

The men who found Gaddafi tell how it happened

Investigative Director for Human Rights Watch Peter Bouckaert, who went to the scene of Gaddafi's capture on Friday, said the evidence seemed to indicate that

Gaddafi was alive when he was taken away from the scene of the battle, and later killed.

"Certainly he was beaten, there was a mob scene, but he was not mortally wounded when he left the city of Sirte,” he said. “Something happened between his capture in the city of Sirte and his arrival in the city of Misrata dead. It appeared he received a fatal gunshot wound to the head somewhere along the way."

A fighter from Benghazi, Ead Alwaz, said when he arrived there were more than 95 bodies on the scene from this final battle and many showed clear signs of execution.

“I think it’s a dark stain on the future of Libya on the first day of its freedom,” Bouckaert said. “Muammar Gaddafi had a lot of charges to answer but he should have answered them in a court room and not by execution. It’s also about armed groups operating with impunity. It’s important that these militias are brought under control of a central government."

Betamal said Gaddafi’s death was a positive end for the Libyan people. He said he believed the conflict would have continued as long as Gaddafi lived.

“What happened was better,” he said. “If he was captured alive, the U.S. would talk, France would talk, Europe would have an opinion. The international discussions could stretch on and on and finally he would die — justice might never be done.”

Meanwhile, Human Rights Watch is also concerned about the fate of others captured on Thursday.

In video footage obtained by GlobalPost, a man with a cast on his leg sits on the ground next to the hole where Gaddafi was found. He appears to have only minor injuries. By the time GlobalPost reached the scene, he was dead, lying face down in the same location.

Human Rights Watch is now investigating these deaths and the treatment of hundreds of prisoners captured during the Sirte conflict.