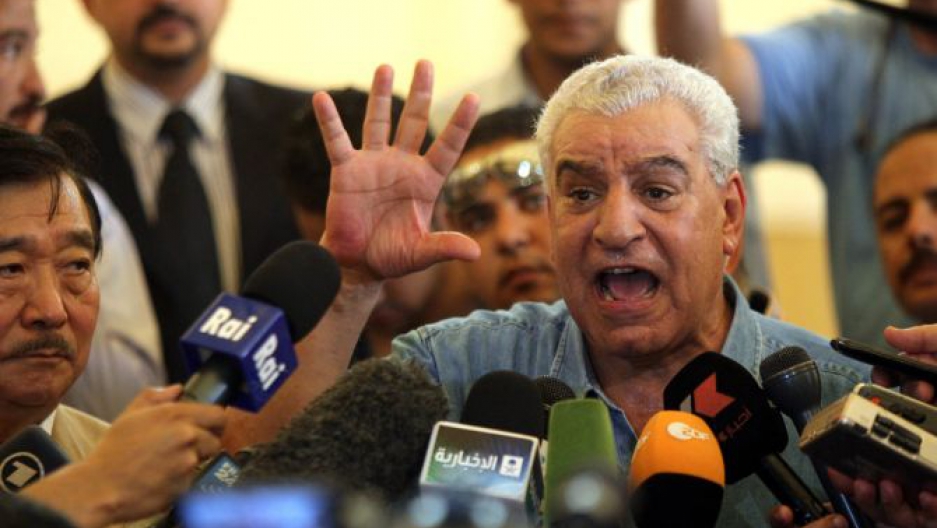 Former Egyptian Minister of Antiquities Zahi Hawass speaks to the press during an event announcing the first step in unearthing the second 'Sun Ship' for King Khufu, who was the second pharaoh of the Fourth Dynasty of the old kingdom of ancient Egypt near the Great Pyramids on the outskirts of Cairo on June 23, 2011.
Credit: Khaled Desouki
Share

Today Hawass is accused of corruption, briefly sentenced to a prison term (lifted by government decree), and targeted by angry protestors who chased him away from his Ministry position after a few months.

Commonly referred to as the “Egyptian Indiana Jones,” Hawass was not wearing his trademark fedora as he hosted GlobalPost in his tightly packed Cairo office. He adamantly swatted away allegations of misconduct while celebrating his own reputation.

“I established Egypt’s heritage, and gave value to Egyptians worldwide,” asserted Hawass, who served as Secretary General of the Supreme Council of Antiquities for nearly a decade.

Hawass is credited with boosting tourism to Egypt by sparking interest in its archeology and spearheading a movement to return many prominent Ancient Egyptian artifacts to Egypt.

But after then-President Hosni Mubarak appointed him Minister of Antiquities in late January, protests erupted calling for him to quit (and “take his hat with him”). Among other things, he was accused of corruption and being a bit too close to former first lady Suzanna Mubarak.

One of the allegations took the form of an official complaint accusing Hawass and former Culture Minister Farouk Hosny of gifting a piece of ancient jewelry to the first lady.

“These are all false rumors,” Hawass exclaimed angrily. “No artifacts can be taken out of the museum without a presidential decision.”

He blamed the media for not verifying facts before publishing allegations. He claimed that certain journalists have been paid by someone with a personal vendetta to defame him in international news outlets.

“I am the only one with international recognition, and people pay attention to what I have to say,” Hawass said, adding that he has done great publicity for the country and that these rumors are now damaging Egyptian antiquities.

After Hawass was fired in July, activist and archeologist Nora Shalaby summed up popular opinion about the international figure.

"He was the Mubarak of antiquities," she said. "He acted as if he owned Egypt's antiquities, and not that they belonged to the people of Egypt."

During the first days of the mass protests, Cairo museum was robbed by looters. “There were 54 pieces missing,” Hawass said. “But I managed to retrieve all the important artifacts. Only 28 pieces are missing now, and they are very small, not masterpieces.”

Hawass said the communication blackout enforced by the former regime in the early days of the revolution helped save the museum from more damages.

“If the internet had not been cut off, all of Cairo Museum would have been robbed,” he said. “Looters would have reached thieves abroad and they would have stolen all the artifacts.”

The Egyptologist added that credit should also be given to the protesters who guarded the museum during the security vacuum and thug attacks on January 28th.

It has been said that in order to know the future, you have to know the past. An expert on the vast history of Egypt, and the archeologist’s extensive knowledge of the past has him worried about what lies ahead.

“Not learning from history will leave us in a state of confusion during these coming times,” Hawass said.

He likened the Egyptian revolution to a similar one that took place four millennia ago, which he said was the first revolution in ancient history and the first-ever interim period.

“Over 4,000 years ago, a king ruled Egypt at the age of 8 and stayed in power until the age of 98,” Hawass says. “When he became old, his power decreased, and the power of his cronies increased. This is what happened with Mubarak as well.”

That ancient revolution lasted 150 years, and the interim period was characterized by chaos, crime, and a lack of security, according to the archaeologist.

Hawass also voiced his concern about the upcoming elections. “It will be hard to ensure free and fair elections,” he said. “Egyptians are used to fraud.”