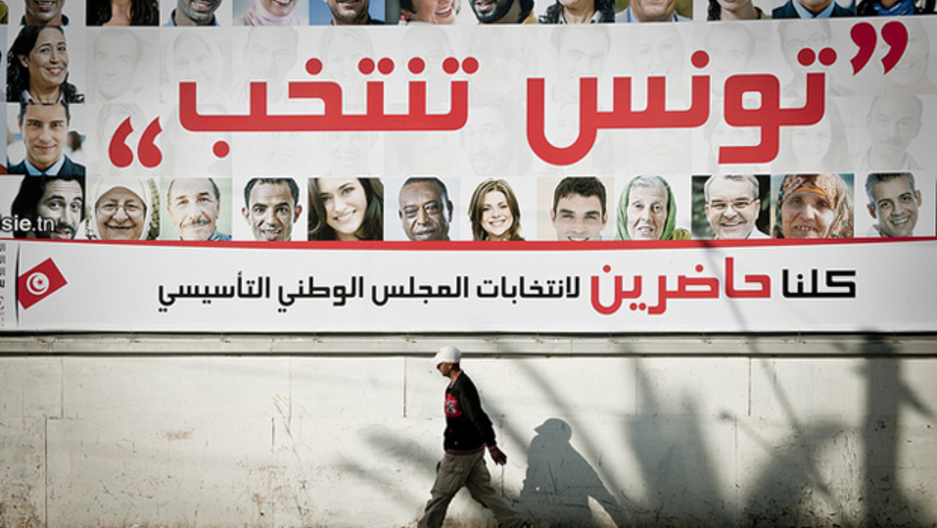 Share
On Sunday, Tunisia will hold its first democratic elections, and the stakes are very high. This could pit secularists against Islamists, and women especially are worried that the most liberal laws in the region will be rolled back. During his 23-year dictatorship over Tunisia, former president Zine El Abidine Ben Ali was keen on the promotion of women's rights and the strict repression of Islamists. Both practices were also part of his propaganda, which made him a tolerable tyrant with Western governments. But since his regime was toppled in a popular revolution back in January, things for women and Islamists in Tunisia appear to be changing because Islamist parties appear poised to take control. That's playing a key role in political campaigns leading up to the country's first democratic elections this coming Sunday. These elections are especially crucial because Tunisians will choose the assembly that writes the country's new constitution and will set the tone for what kind of country Tunisia becomes. It was unimaginable under Ben Ali to see thousands of Islamists calling for the establishment of an Islamic state in Tunisia. But that's just what happened at demonstrations last week. Islamists were brutally repressed under the Ben Ali regime. So this resurgence of religious fervor has raised tensions, especially ahead of this Sunday's election. Islamists like 30 year-old Slim, know exactly what they want Tunisia to be. "Everyone wants to see the Islamic religion in all the regions, in the state, in clothing and in the judiciary," he said. Slim, who wouldn't give his family name, is sitting in one of the many cafes of Cité Ettadhamen, a poor suburb of Tunis, which has become known as an Islamist stronghold. "We are Muslims. We like being Muslim with our own clothing, our own prayers and all the forms of Islam. Women have a special clothing for themselves," he said. It's this kind of talk that spooks the secular parties in Tunisia. They are wary of the new political currents. Souad Rejeb, a committee member of the Tunisian Association of Democratic Women, says while Tunisia's civil society has flourished since the revolution, she's worried about the effects the shifting political landscape could have on women's rights. "We just hope there will be enough progressive people in the Constituent Assembly that there won't be an erosion of the Personal Status Code," Rejeb said. The Personal Status Code is the backbone of women's rights legislation in Tunisia. It's a law that was passed in 1956, and gave women the right to vote, to be elected to parliament, to earn equal wages, and to initiate divorce. Polygamy was outlawed by the code and then, in 1961, abortion rights were granted. Women's rights here are more advanced than anywhere in the Arab world and the secular parties say they will fight to maintain that unique status. "There are retrograde forces in the country," said Abdelaziz Messaoudi, a member of the political committee of the center-left Ettajdid party. Ettajdid is one of the main opponents of Al Nahdha, Tunisia's most prominent Islamist party. Al Nahdha was established in 1989 but banned under Ben Ali. Since the revolution, it's bounced back with gusto. Polls predict it could take around 20 percent of seats in the Constituent Assembly. Messaoudi is not happy about that possibility. "If Al Nahdha wins a big part of the election and if it is well represented in the next Constituent Assembly, it could call back into question a certain number of gains in women's rights. That's a real threat," Messaoudi said. Al Nahdha says the secular parties are using women's rights and Ben Ali-style anti-Islamist propaganda to stir up fears and win votes. Yusra Ghannouchi, the daughter of Al Nahdha leader Rachid Ghannouchi, and a spokesperson for the party, says the party's platform on women's rights is unambiguous. "It's clear on women's issues, that it respects women's rights to equality, to education, to work. It does not believe in a theocracy," Ghannouchi said. "It does not believe in a system that will impose a particular believe or lifestyle on people. It believes in equality, regardless of race, faith, sex or color. But the country's secularist parties and women's activists, like the Tunisian Association of Democratic Women's Souad Rejeb, accuse Al Nahdha of sending out a double message. "They have what we call a duplicity of discourse," said Souhad Rejeb of the Tunisian Association of Democratic Women. "They have two lines: on TV they say 'We are for equality, we won't touch woman's rights,' but in the mosques or abroad, they say 'the Personal Status Code is not in the Koran.'" And it is this perceived inconsistency that brought many women out on the streets last Sunday in defense of freedom of speech and equality. Faced with such demonstrations, Yusra Ghannouchi of Al Nahdha says that actions and not words are the only things that can be really judged in politics. "What will guarantee respect of these freedoms and rights is not be anyone's word for it, but to have a system that ensures that there will be checks and that there will be institutions that ensure that politicians keep their promises and that should apply to secularists and Islamists," Ghannouchi said. In the 10 months since the fall of Ben Ali, Tunisia has been furiously building the hardware of democratic politics — institutions and procedures to cradle and protect its democracy regardless of who's in charge of the government.