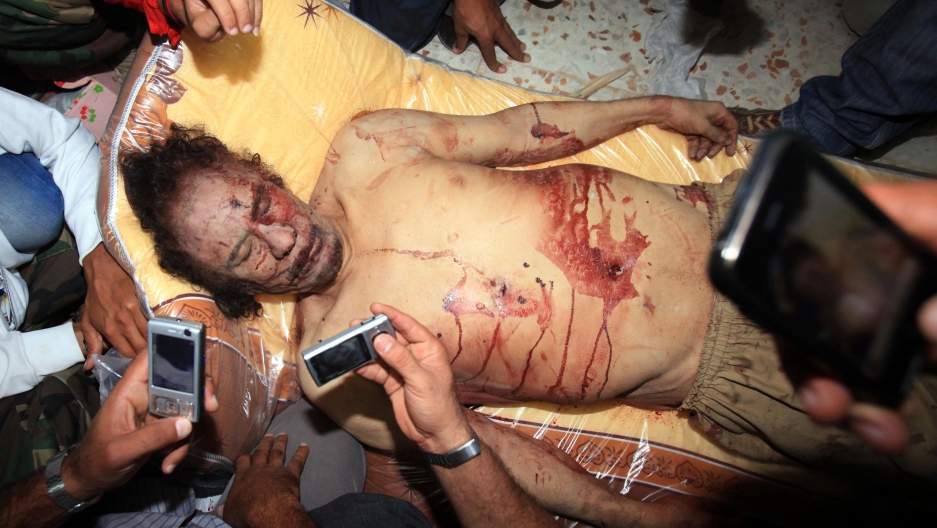 Libyans take pictures with their mobile phones of the body of Moamer Kadhafi in Misrata on Oct. 20, 2011.
Credit: Mahmud Turkia
Share

Bloody Muammar Gaddafi staggering and roughly bundled onto a truck by angry Libyans hurling abuse at him.

The graphic video says it all, or does it?

Who killed Gaddafi? Why wasn't the deposed leader brought to trial?

Many say it doesn't matter because Gaddafi was a brutal dictator, crazed by his years in power, who killed and tortured to the end. He got what was coming to him. Live by the sword, die by the sword.

The video of Gaddafi's capture makes it clear that he was pulled from the storm drain by frightened, angry fighters, pumped up by the adreniline of battle and the deaths they have witnessed. Should they be held to the exacting standards of international law? They found a liberating catharsis in hauling Libya's tyrant around. Even watching the video brings home the gripping reality that Gaddafi is finished.

So why does it matter if he was shot and not taken to court?

Because the rule of law matters. It is what makes us civilized. And each step we make toward making war more civilized is significant.

I was in Romania on the day that Nicolae and Elena Ceausescu were hastily done away with, and I was in Mosul on the day before Uday and Qusay Hussein were surrounded and submitted to lethal shot and shell in a house from which there was no escape. In both cases, the relief felt by the general population was palpable. There can be no doubt that the proven elimination of the old symbols of torture and fear has an emancipating effect, at least in the short term. But I would say that this effect is subject to rapidly diminishing returns, which became evident in Iraq when Moqtada al-Sadr’s unpolished acolytes got the job of conducting the execution of Saddam Hussein. There are sectarian scars still remaining from that botched and sordid episode, and I shall be very surprised if similar resentments were not created among many Libyans on Thursday. Too late to repair that now. But it will be a shame if the killing of the Qaddafis continues and an insult if the summons to the Hague continues to be ignored.

The International Criminal Court may appear bureaucratic and ineffective but it is slowly establishing its authority and setting precedents to uphold the rule of international law over war and over the protection of human rights. The ICC's steps are small but critical for us all.

I think of Robert Mugabe. Countless aggreived Zimbabweans would like to see him bloodied and staggering about like Gaddafi. But it would be best for the nation to see Mugabe brought to trial and to justice.

It may not be crucial to find out who killed Gaddafi. But it is imperative to set the precedents so that other despots will be brought to court and judgment, even though they may deserve a lynching mob.