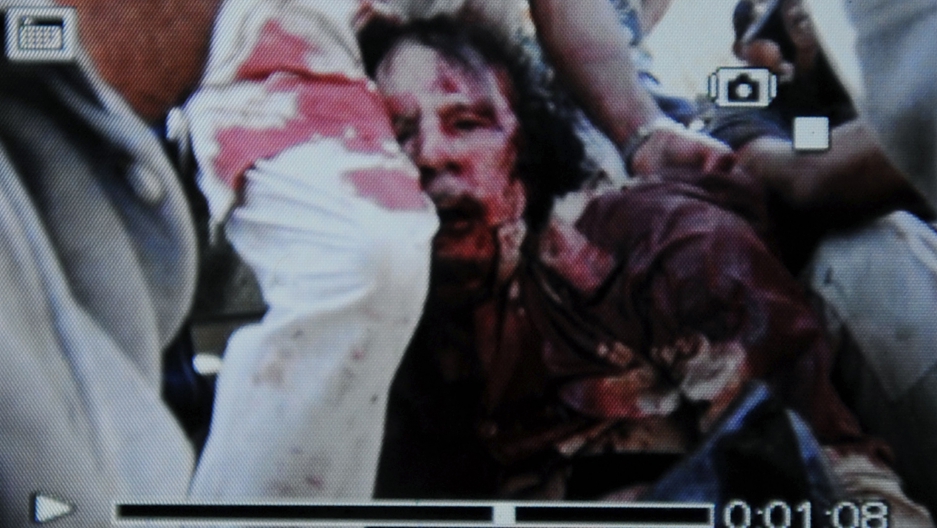 An image captured off a cellular phone camera shows the arrest of Libya's strongman Moamer Kadhafi in Sirte on October 20, 2011. A Libyan National Transitional Council (NTC) commander had told AFP that Kadhafi was captured as his hometown Sirte was falling, adding that the ousted strongman was badly wounded.
Credit: Philippe Desmazes
Share

"It is regrettable that the Libyan conflict ended with the gruesome killing of the Libyan leader," ANC spokesman Jackson Mthembu said Friday in a statement.

"It is the view of the African National Congress that this could have avoided had the African Union roadmap been adopted," the statement said. "We are as convinced now as we were then that a peaceful approach would have saved many lives in Libya if it was given a chance."

Gaddafi died Thursday near the town of Sirte, his birthplace in Libya, after being found hiding in a water drain by fighters allied with the National Transitional Council. The exact circumstances of his death are still unclear, but exclusive video obtained by GlobalPost correspondents shows his capture.

South African President Jacob Zuma said Friday that Gaddafi should have been captured, not killed, and then put on trial at the International Court of Justice.

"I understand there was war in Libya. In a war situation, people die, people are captured," Zuma told reporters at a briefing in Pretoria with visiting Equatorial Guinea President Teodoro Obiang Nguema Mbasogo.

"We expected him to be captured, given that everybody knew there was a warrant of arrest issued against him," Zuma said, according to the South African Press Association.

Gaddafi remained popular among some members of South Africa's ANC because of his support for the party during the apartheid era. Starting in the 1970s, the ANC used Libya as military training base for its cadres in the fight against apartheid.

Both Zuma and Nelson Mandela have fondly referred to Gaddafi as “Brother Leader.”

During the mounting violence of Libya’s revolution, Zuma twice traveled to Tripoli for talks with Gaddafi on behalf of the African Union.

Both times Zuma claimed the meetings had been a success and Gaddafi was willing to follow the AU's roadmap to peace. But rebel leaders rejected the AU plan because it did not require Gaddafi to leave power.

Even as Tripoli fell, South Africa's government insisted that the AU roadmap was intact and a change in government must happen through negotiations, not force.

South Africa's approach in Libya echoed its diplomatic efforts in Zimbabwe and Ivory Coast: emphasizing an “inclusive” solution, even if it props up a repressive regime.