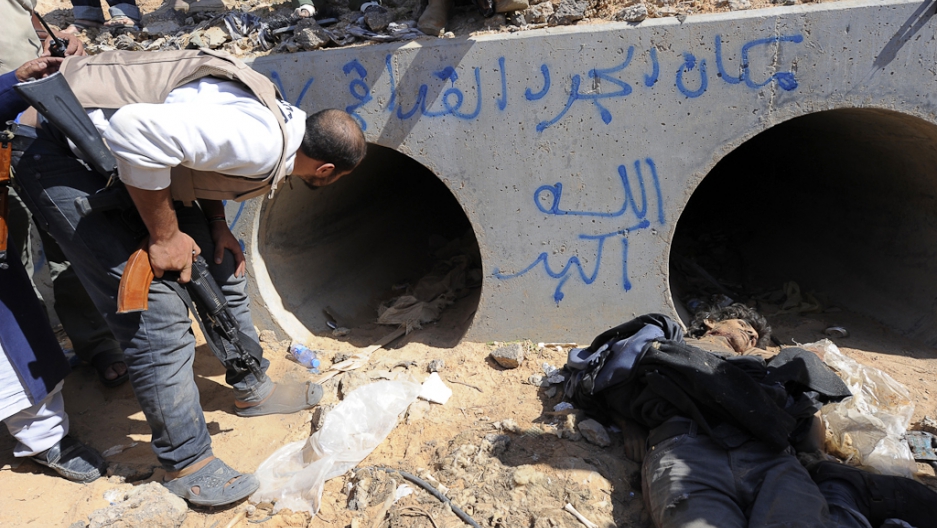 In this exclusive footage obtained on the scene by Tracey Shelton of GlobalPost, Col. Muammar Gaddafi is caught by fighters for the new Libyan government.

The shock discovery of the former dictator, found cowering in a water drain on Thursday in his hometown of Sirte, was captured by Ali Algadi, a rebel fighter, with an iPhone just seconds after Gaddafi was dragged from the drain in which he was hiding. This is the earliest footage to emerge so far.

Fallen leaders: Deposed despots from around the world

Although clearly injured, Gaddafi is still alive during the capture. His captors can be heard shouting, "Dont' kill him! Don't kill him! We need him alive!" throughout the footage.

According to an official statement by the National Transitional Council, Gaddafi was shot before his capture and died from his wounds on route to Misrata.

Fighters at the scene said he was injured in the shoulder and leg when he was found. Blood also appears to be flowing from a head injury. So far reporters and human rights groups have been blocked from viewing the body but footage has emerged showing bullet wounds to the torso and head which may cast doubt on the statement released by the interim government.

Slideshow: Gaddafi's fashion through the years

A crew of doctors leaving a family home where Gaddafi’s body was temporarily being held said they had performed DNA tests but did not have any results to release at this time. Gaddafi’s son Muttasim was also killed while trying to escape nearby.

More: Who killed Gaddafi? Why we should care.