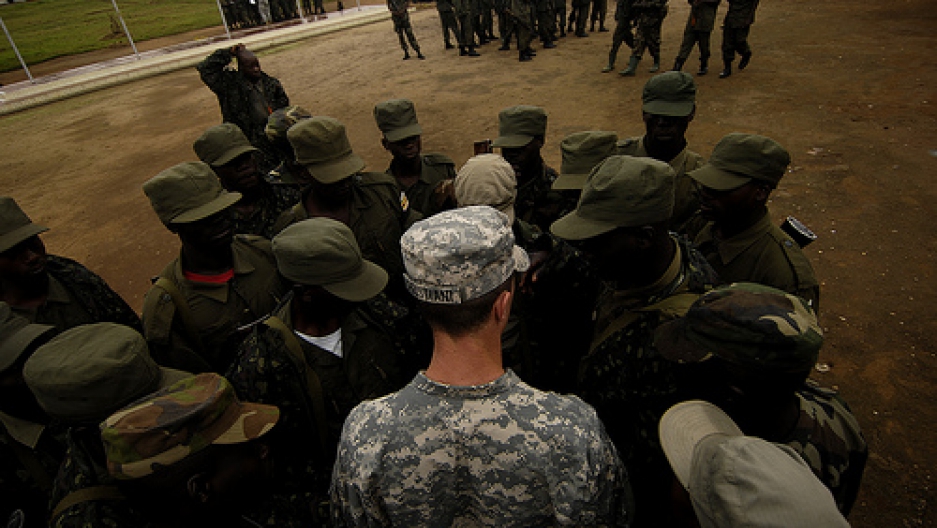 An American solider in Uganda on a training mission during a previous deployment. (Photo from U.S. Army)

Story by The Takeaway. Listen to the above audio for a complete report.

The United States Army last week quietly deployed armed soldiers to Uganda, to help in that country's battle with the Lord's Resistance Army.

The LRA is a Christian militia responsible for more than 30,000 deaths and countless rapes and kidnappings in Uganda, the Central African Republic, the Democratic Republic of Congo, and southern Sudan over the past ten years. The soldiers are officially there to advise the Ugandan Army in its battle with the LRA, though the Americans are fully combat ready.

Ugandans have for almost ten years been asking the international community to come help them. And while it seems like the United States has finally answered the call, Simon Alison, the Africa correspondent for The Daily Maverick, an online newspaper in South Africa, says the U.S. doesn't have entirely altruistic motives in finally sending troops to central Africa.

"They're probably the most dangerous terrorists in the world, bar none. However, they don't seem to have much strategic influence on the geopolitical situations that concern the major powers," he said. "They've largely been left to their own devices, until now. And the timing of this move is somewhat suspicious."

Alison said the U.S. is concerned that a supergroup will be formed in Africa, combing Al Shabab in Somalia, Al Qaeda in the Islamic Maghreb in northwest Africa, and Boko Haram in Nigeria.

"The nightmare is all of these groups will combine and create some sort of Al Qaeda supregroup," Alison said.

While Alison is quick the point out that the LRA is extremely unlikely to join such a group, battling the LRA actually helps enable Africans to combat those Islamic groups. Uganda is one of the major suppliers of troops to the effort to keep Al Shabab in check in Somalia. Alison said the U.S. actions may be as a way to thank Uganda for its efforts in Somalia, and possibly to incentivize it to send more.

So far, U.S. officials have not said there's any connection, official or otherwise, between this deployment and the battle with Al Qaeda.

Alison said Ugandans are welcoming the United States soldiers — even if it is a pretext to battle Al Qaeda.

About 300 soldiers are expected to be deployed.