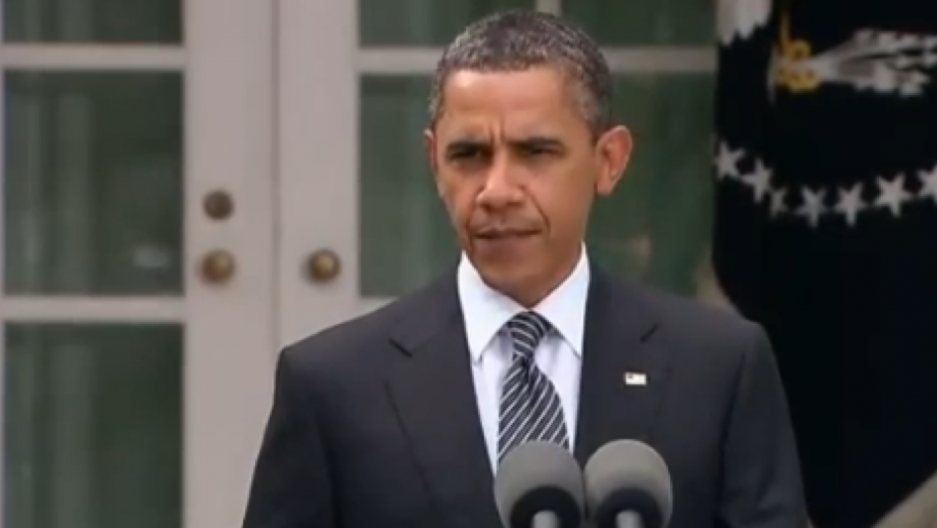 President Barack Obama addressed the nation at a press conference Thursday on the death of Muammar Gaddafi.

"Today we can definitely say that the Gaddafi regime has come to an end," President Obama said. "The last major regime strongholds have fallen."

Al Jazeera showed graphic images earlier today of what was said to be Gaddafi being dragged around by armed men in Sirte, the ruler's hometown. GlobalPost's Libya correspondent James Foley reported on an eye-witness account of Gadaffi being shot in the heart and in the chest. The death of the autocratic ruler has been welcome news for pro-democratic supporters.

"This marks the end of a long and painful chapter for the people of Libya," President Obama said.

Neither President Obama or White House officials confirmed the reports of Gaddafi's death but say they have full confidence in the accuracy of the claims.

With Gaddafi dead, President Obama said the people of Libya now have great responsibility in building a tolerant and democratic nation.

"Today's events have proved once more that the rule of a iron fist inevitably comes to an end," President Obama said.

"The president believes the actions taken by his administration and NATO have helped the Libyan people reach this day," White House press secretary Jay Carney said. "They now have an opportunity to secure a much brighter and democratic future."

While the revolution is at its end, deep divisions remain in the country, and fears of civil war are ever present. The Libyan rebels themselves are far from unified and have been jockeying for power amongst themselves for months. And, now that the focus of the rebels' firepower — Gaddafi — is gone, many Libyans worry that the real divisions within the rebel faction will begin to emerge in more serious, and possibly violent, ways.

After pro-democracy movements overturned Egypt and Tunisia's rulers in early 2011, Libyans revolted against the near 40-year dictatorship of then-leader Gaddafi. Libyan rebels took over the eastern part of the country that eventually spread to the capital of Tripoli with the help NATO forces in late March. Gadaffi's soldiers made a last stand for several weeks in Sirte until Thursday morning, when rebel forces finally took over the entire city.