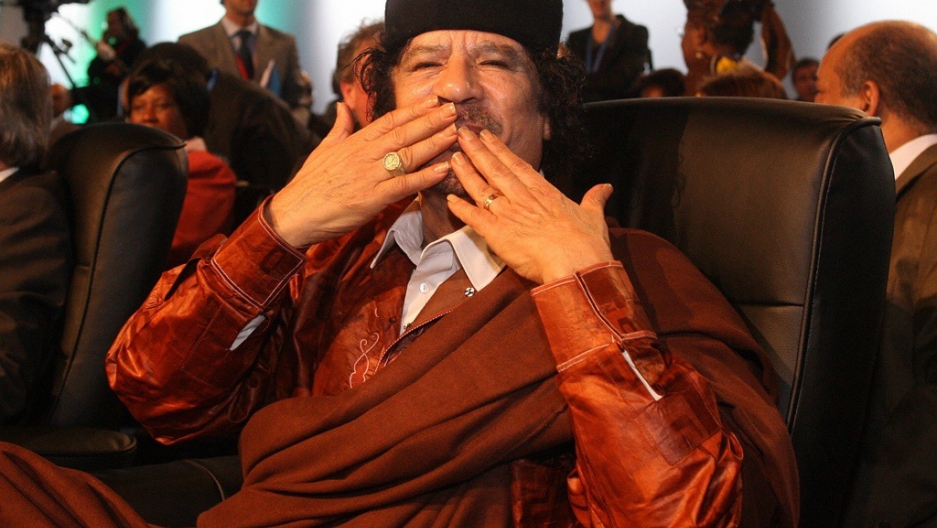 Before his downfall, Libyan leader Muammar Gaddafi blows kisses to journalists at the Europe-Africa summit on December 8, 2007, in Lisbon.
Credit: Dominique Faget
Share

Not everyone is celebrating the death of Muammar Gaddafi.

“This is a sad day for the people of Africa. This is the beginning of a new recolonization of Africa,” said retired Major Cairo Mhandu, a Zanu-PF member of parliament.

“Through the forces of NATO and the West, we have lost one of our brothers,” said Mandhu to GlobalPost. “Muammar Gaddafi won elections and was a true leader. It is foreigners who toppled him, not Libyans. Gaddafi died fighting. He is a true African hero.”

Mandhu said that there are no lessons for other African leaders from the fall of Gaddafi.

Other Zimbabweans, however, disagree with Mhandu.

“Gaddafi was a tyrant and a big ally of Mugabe. Gaddafi’s death means one less comrade for Mugabe,” said Iden Wetherell, an editor of the Zimbabwe Independent.

“Mugabe will be more isolated. Gaddafi helped prop up Mugabe, through oil and finances,” said Wetherell.

“Mugabe must be worried about the images from Sirte. He will feel a twinge of nervousness to see Gaddafi’s body and Libyans celebrating,” said Wetherell. “But I am sure Mugabe will stick out his jaw and declare ‘To hell with them’ when he sees the festive mob. But he must feel more isolated.”

The differences of opinion over Gaddafi strike at the core of Zimbabwe’s own clash over the rule of Mugabe and his Zanu-PF party.

“Everyone I have met, from shopkeepers to political analysts, say Gaddafi's death is a lesson well learned,” said another Zimbabwean journalist.

“Zimbabweans feel particularly close to the events in Libya not only because Gaddafi was a close Mugabe friend, at one time, but also because they live in a dictatorship hence the excitement here at seeing a dictator fall,” he said.

Many other Zimbabweans are celebrating Gaddafi’s downfall.

"It encourages, motivates us that it is possible to oust a strongman who has all the cash and weapons at his disposal. But I also feel an element of jealousy. The Libyans are done with their dictator yet we still have ours," said Harare taxi driver identifying himself as Amos Gapara.

Many Zimbabweans called in to the radio show “Studio 7,” which is broadcast by Voice of America into Zimbabwe, to express their happiness at Gaddafi’s death.
"I am glad this murderer is dead. Dictators have NO place in the world scene,” said one caller. “I don't care if he provided a bit more stability or money to the people than other dictators. He is still a murdering dictator. Now the Libyan people can have an even better future without the fear of a secret police destroying his life for saying something wrong to a friend."

Zimbabwean journalist Sandra Nyaira, who works for “Studio 7,” said her own opinion is that Gaddafi was responsible for his bloody end.
“Gaddafi was the sole architect of his own downfall and his death and dethronement should serve as a notice to all African dictators that one day there will be a day of reckoning,” said Nyaira.

“Gaddafi had time to leave if he wanted, right in the beginning, but he thought the revolution was going to be defeated. But where is he now? Who would have thought that Africa's strongman Gaddafi would go out this way? I'm sure not even he himself ever imagined that his lifeless body would one day be dragged and spat at with people celebrating over it,” said Nyaira. “If only Africa’s leadership would learn from the North African experience on the need to uphold democracy and the rule of law, holding free and fair elections and agreeing to pass on the baton stick.”