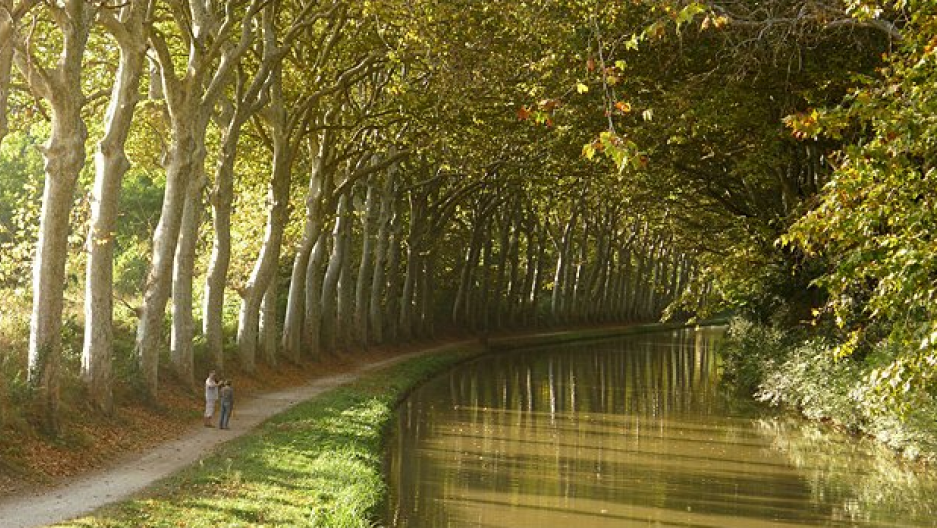 Plane trees line the Canal du Midi in France. Soon, however, they're expected to be gone as a fungus kills them slowly.

Story from PRI's The World. Listen to the above audio for a full report.

It's noon in the farmlands outside Toulouse, but the light on the Canal du Midi is dim, almost like twilight.

The deep shade is created by the leafy branches of huge plane trees that tower above both banks, and arch across the water creating a dense canopy.

It's an exquisitely beautiful scene. And one that runs the length of the canal on its 150 mile course from Toulouse to the port of Sete on the Mediterranean.

It was five years ago that Jacques Noisette realized something was wrong.

"In the spring of 2006, I began to notice that some of the plane trees were dying," says Mr Noisette, who works for the French government agency that manages the canal.

"Their new leaves should have been opening up, but they weren't. We asked ourselves why."

Specialists soon identified the deadly fungus, Ceratocystis platani, for which there is no apparent cure.

"Even a small scratch or cut on a plane tree is enough for the fungus to get inside and attack. It thrives deep in the tree trunk," says Mr Noisette. "Within three to five years the tree is fully infected. There's nothing we can do except cut the trees down, and burn them on the spot."

Researchers say the trees must be felled before they die. Otherwise they could fall on boaters, who travel along the canal - spreading the fungus as they go.

"We know the fungus travels through the canal water," says Mr Noisette. "The trees can get infected when boats scrape up against the roots. Or when uninformed boaters tie-off their boats to the plane trees themselves."

French agronomist Andre Vigouroux, who has been studying the fungus for years, says it's been traced to the munition boxes American soldiers brought over to Europe in World War II, which were made from North American plane trees.

It's been spreading through Europe, from Italy, and Steve Woodward from the University of Aberdeen, says it is likely eventually to kill the planted planes that line the streets of cities such as London, Paris and Berlin.

"There really are millions of these trees planted in non-native areas.

"We are talking about a massive disaster if the disease continues to spread," he says.

Along the canal tree-felling has begun - 1,000 trees were cut down last winter, 2,000 more will be felled in the coming months.

It will take years to clear all 42,000 of them, but once the trees have gone, so may the two million tourists who visit the canal every year.

"It is so hot in the Midi that it would just change it totally without the trees," says retired British tourist Graham Barley, who has been travelling up the canal from the Mediterranean in a wooden houseboat.

His wife Linda agrees. "In practical terms, it would make cruising between noon and 4pm unbearable," she says, even in September.

Completed in 1681, it was designed to link up with another waterway further west - now known as the Canal de Garonne - to allow merchants to move between the Atlantic and the Mediterranean, without having to sail around Spain and Portugal. The sea route was long and arduous, and ships could fall victim to storms and pirates.

The plane trees were a later addition, planted in the 1830s in part to provide shade to those using the waterway.

UNESCO declared the canal a world heritage site in 1996, saying it had "provided the model for the flowering of technology that led directly to the Industrial Revolution and the modern technological age". To retain this status, however, France will have to replant the trees it chops down.

So that's the plan. To replant a variety of trees where the plane trees now stand. Trees with strong root systems to maintain the canal banks, and with thick leaves to create shade.

And ironically, given that American GIs brought the fungus to Europe in the first place, among the new trees to replace the old are 7,000 disease-resistant plane trees - all the way from Mississippi.

Whether colder parts of Europe will be able to use the Mississippi strain to replant any planes they lose in the future, is as yet unknown.