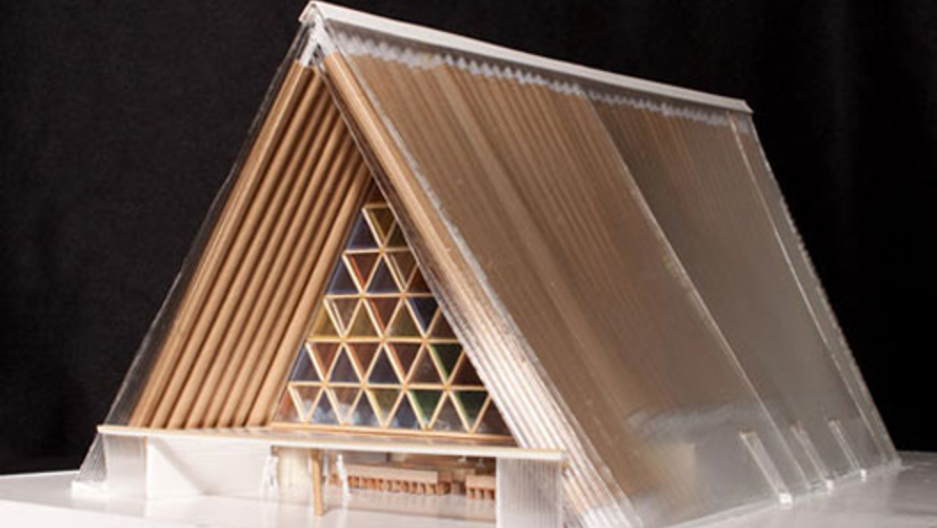 Share
By Phil Mercer New Zealand is doing some soul-searching after a series of powerful earthquakes this year. The most devastating hit the city of Christchurch in February, killing 182 people. This week, the country launched hearings into why so many people died. The quake leveled large sections of Christchurch, including the city's signature 150-year-old cathedral, and the city continues to be rattled by aftershocks. "It takes a toll," said Lisa Brignal, a Christchurch resident. "My husband has even considered, you know, leaving for the sake of our sanity." Thousands of residents have already left. So to lift the spirits of the beleaguered city, authorities have plans to replace their condemned cathedral with a temporary structure – one made of cardboard. Peter Beck, the city's Anglican Dean, said they're working with an eminent Japanese architect, Shigeru Ban, who builds cardboard structures around the world. "They are amazing buildings," Beck said. "We are hoping to build a cardboard cathedral and get that up early in the New Year." He said that the building would be a sign of hope and confidence in the future of the city and the church. The design calls for a giant A-frame structure with 86 giant cardboard tubes placed on shipping containers. The paper cathedral, which would seat about 700 people, would be waterproof and fire resistant. A triangular stain-glass window would dominate its faÃ§ade. It's not Shigeru Ban's first design for a post-disaster community. He built a cardboard church in the city of Kobe, Japan, following the earthquake in 1995, which served worshipers for 11 years. He's also designed structures for post-quake Haiti. Now he's turning his attention to Christchurch. He said the cardboard tubes that make up much of the Christchurch design are locally available. "The structure is very strong," he said. The construction is expected to take about three months to complete at a cost of about $2 million. The original cathedral was badly damaged in the February earthquake, and then a powerful aftershock sent more of the building crashing down. Officials have yet to decide on a long-term replacement for the landmark but Christchurch mayor Bob Parker hopes a temporary cardboard cathedral will give the city a much-needed boost. "I think it is an inspirational idea. They symbol of hope is already here; it's embedded in the hearts of our people, to be honest with you, but this a physical way of showing that as well," Parker said. Peter Beck hopes the project will be completed in time for the first anniversary of the earthquake in February. He said the design should bring some comfort to a bruised community. "It has a really nice feel about it. It is almost tent-like and I like the idea of pitching our tent in the center of the city." The total cost of reconstructing New Zealand's second largest city is expected to exceed $15 billion, and officials say it could take another 20 years before the work is complete.