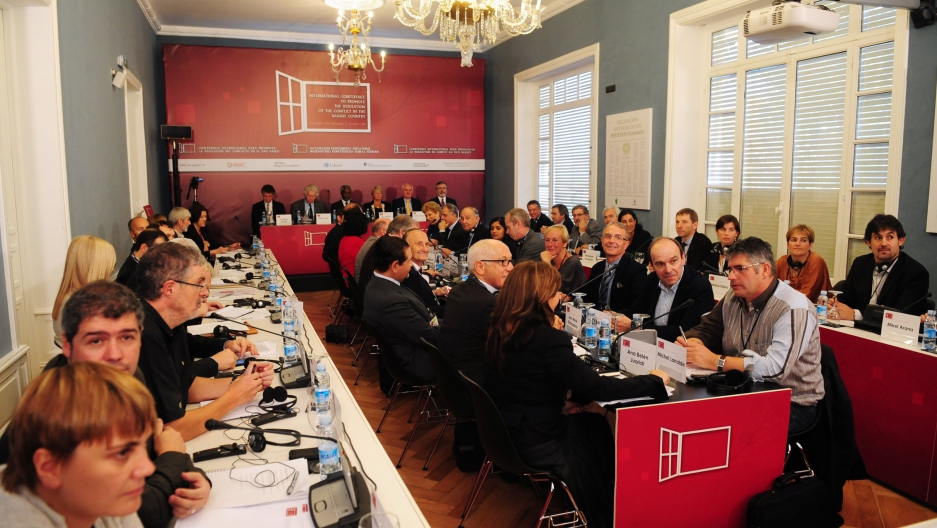 International and Basque representatives of political parties, social groups and mediators take part in a conference to promote a resolution in the Basque Country, called by the Lokarri pro-dialogue group and presided over by former UN secretary general, Kofi Annan, on Oct. 17, 2011, in the northern Spanish Basque city of San Sebastian.
Credit: RAFA RIVAS
Share

The Basque separatist group ETA declared Thursday that it was ending armed conflict in its struggle for an independent Basque state. A year ago, the group, which is considered a terrorist organization by Spain, the United States and the European Union, implemented a unilateral ceasefire, CNN reports.

The group sent a written statement and a video to various media outlets, including the Basque newspaper Gara, the BBC and the New York Times. ETA leaders announced, “ETA has decided the definitive cessation of its armed activity," according to the Guardian.

The leaders also asked the Spanish and French governments to "agree to talks exclusively to deal with the consequences of the conflict,” CNN reports.

Since 1968, ETA bombings and gun attacks have killed 830 people across Spain, and 600 ETA members are in Spanish and French jails, the Guardian reports. ETA supporters are likely to push for their release as well as for the legalization of pro-separatist political parties that have been banned.

According to the New York Times:

Although the announcement met longstanding demands from the Spanish and French governments, the United Nations and human rights groups for an end to the violence that has characterized the militants’ struggle, it appeared to fall short of guaranteeing that the armed struggle would never resume. For one thing, the ETA statement, far from renouncing the group’s goal of independence, reasserted it emphatically, with the commanders joining at the video’s end with traditional ETA rallying cries reaffirming their demands for freedom.

ETA crafted its announcement with the assistance of a group of informal peace negotiators including Kofi Annan, the former secretary general of the United Nations, the Guardian reports.

"A new political time is emerging in the Basque Country," ETA said in its written statement, CNN reports. "We have a historic opportunity to find a just and democratic solution for the centuries' old political conflict."

The Spanish prime minister, José Luis Rodríguez Zapatero, responded to the announcement on television, the New York Times reports. “The state of law today triumphs,” he said. “Our democracy will be one without terrorism, but not without memory.”