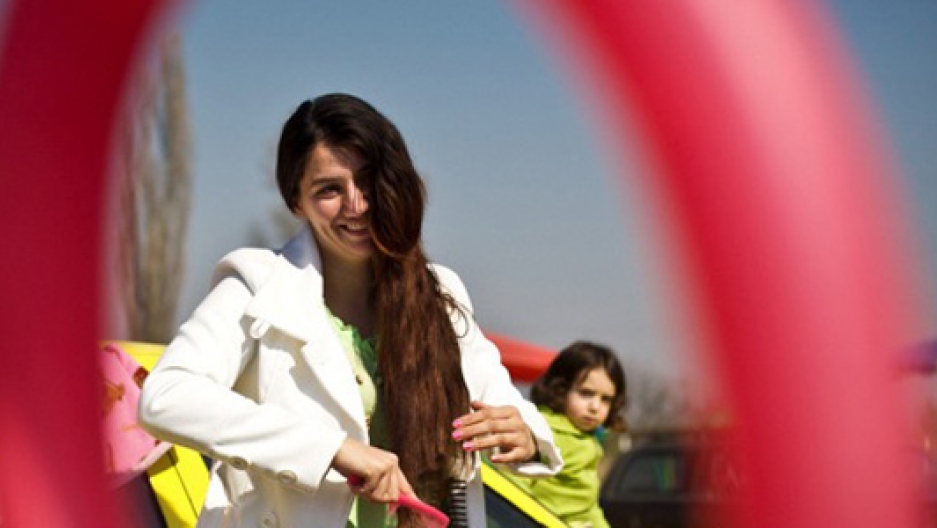 March 13, 2011 -- The Thracian tinkerers clan of Bulgaria, one of the communities with best preserved traditions, gathers in the village of Mogila near Stara Zagora on the feast of St. Todor, or Horse Easter. One of three nationwide gatherings a year at which community connections are strengthened as bride-wannabes are paraded through the crowd.

Share
The Trakiiski Kalaidzhii — or the Tinsmiths of Thrace — are one of Europe's most enduring cultures. They still have a semi-nomadic lifestyle, fixing cauldrons and pans as they travel along their traditional routes. In Bulgaria, they are probably most famous for their so-called bride market. Kalaidzhis don't marry outside the group. And boys and girls aren't allowed to date without adults around. So this festival for the feast of St. Todor is one of the few chances they have to meet potential mates, and dance the horo, or ring dance. The scene in the open field outside town is a strange mixture of modern and old fashioned. The Kalaidzhii women wear their hair in braids, long velvet skirts and brightly colored headscarves and lots of gold jewelry. Their daughters dress just like modern Bulgarian women, in tight, flashy clothes and heavy makeup. There's beer, grilled meat and lots of socializing. But even if a couple gets to know each other at one of these events and decides they want to marry, the suitor needs permission from the bride's father. And most importantly, they need to agree on a price. Vasilka Todorova says the tradition keeps the Kalaidzhi backward. "The Kalaidzhis go to the market to sell their daughters like horses," says Todorova. "They are treated like animals. The only thing that's missing are signs which say how much they cost? I don't like it at all." But while money is a big part of the matchmaking, it's not like husbands are "buying" a bride says Velcho Krustev, a Bulgarian anthropologist. The bride price, known as "blood for the father," is essentially payment for his personal guarantee that his daughter is really a virgin. Kalaidzhis see this as the only way to know for sure that the babies she'll have are her husbands. "The boy buys the honor of the girl and not the bride herself," Krustev says. "And the husband's family is buying the right to include the women's future children in their family line." Deals aren't completed on the spot. Negotiations take months, dragged out over many similar social events. Krustev says the money is not really a "payment" since it's generally returned through gifts and financial help for the young family. So the high asking "price" is a kind of proof for the bride's father that his new son in law will be able to provide for his family. But for young Kalaidzhi bachelors like Petko Kolev, the price is way too high. He's been looking for a bride for a long time. "Maybe 10 years," Kolev says. Kolev says the global economic crisis has hurt Bulgaria, but hasn't affected the expectations of Kalaidzhi fathers. "It's making more people poor, but they wants the money," he says. "The price is not going down." A normal price is about $7,000 – more than a year's wage for the average Bulgarian. Young men here say it can go up to $20,000 if the hoped for bride is really beautiful. "I don't like this tradition, it's very bad, this is a crazy tradition," Kolev says. Kolev could elope or marry a Bulgarian woman, but breaking with the tradition he hates could mean breaking with his family. So Kolev says he has to go along. "Because this is a very old tradition and I have to listen my family," Kolev says. "I don't want to be angry with my family, they have taken care of me since I was baby. It wouldn't be good to do this." Kolev says he's constantly thwarted — even though he's not even looking for the prettiest girl. He just wants a nice one. "I don't want her to be beautiful you know, just to have a good heart," he says. "I want her to be beautiful inside, you understand, to have a good soul." Krustev the anthropologist says the Kalaidzhii — of all Roma groups — have preserved the tradition the most. But there are some changes underway. "They have already started picking their own marriage partners," Krustev says. "Sometimes they even elope. The older generation doesn't choose the spouses as often as they used to. The children can choose their spouse, if their parents agree. That's the big change. The bride price is becoming more symbolic." Most younger Kalaidzhis more or less agree that this tradition, like others, will disappear soon, along with the older generation. They're having fewer children, connecting to the wider world through the Internet and cell phones and mixing more with outsiders. But the end of the traditions, the older generation fears, will mean the end of the Kalaidzhis themselves.