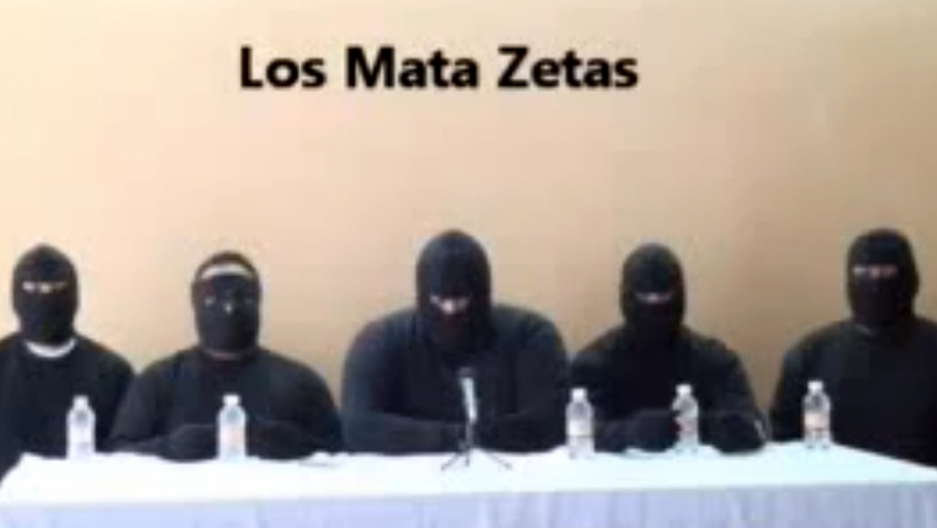 A screen capture of a paramilitary group that calls itself the "Mata Zetas," or "Kill Zetas," It has vowed to "eliminate" the Zetas in an online video.
Credit: -
Share

ATACO, Colombia — In a clearing in the Colombian jungle some years back, the gunman watched a small Cessna plane land on a clandestine runway and then marched up to greet the foreign pilot and his passenger.

The visitors, the gunman told GlobalPost in an interview later, were members of a major Mexican drug cartel who had come to buy a ton of cocaine. The gunman worked for a Colombian paramilitary group that claimed to be vigilantes protecting the community. The deal took place in 2004.

“It was a business deal. We weren’t interested in what these people did in Mexico. They paid, and that was good enough for us,” said the gunman, a 32-year-old who'd survived bullet wounds in his chest and head. He asked his name not be used.

These links between Mexican drug cartels and Colombia’s paramilitaries are crucial in understanding the evolving bloody conflict in Mexico. In recent months, Mexican cartels have begun posing as vigilantes, Mexican officials say, just like the Colombians with whom they have long worked. As they kill victims and dump their bodies on the streets, they say they are saving the country from antisocial criminals.

Many in crime-ridden communities support such violence against the kidnappers — just as many in Colombia supported paramilitaries, who fought against leftist guerillas but ultimately committed massive human-rights violations. Observers warn that a rise in vigilante death squads could simply unleash more violence in Mexico, as it did in the Colombian civil war.

The threat of narco-vigilantes gained international attention last month when assassins dumped 35 bodies on a street in Mexico’s swampy state of Veracruz, and left a note claiming the victims were extortionists and kidnappers from a gang called the Zetas.

Following that massacre, a group calling itself the Mata Zetas, or Zeta Killers, released a propaganda video saying that they kill rapists and abductors but support the armed forces.

The video, which was posted on the internet, shows five ski-masked members of the mob sitting at a table with bottles of water, as they stare at the camera.

“For ethical principals, we prohibit extortion, kidnapping, robbery and rape,” says a bulky figure in the center of the group. “We are anonymous warriors, without faces, but we are proudly Mexican.”

However, Mexican military officers say this vigilante group is really a militia linked to the Sinaloa cartel, the nation's oldest drug-trafficking organization, and a bitter rival of the Zetas cartel.

As such, their genuine interest in attacking the Zetas is simply to take over their drug-trafficking routes, the military officers say.

“We stress that they are criminals who belong to a criminal group that wants to seize control of the criminal activities of another criminal group,” presidential spokeswoman Alejandra Sota told reporters.

Mexico’s marines, who have received American military training, have subsequently arrested several men accused of being in the Zeta Killers group.

The Mexican cartels’ use of vigilantism shows eerie similarities to that of the Colombian paramilitaries.

In some notes, Mexican gangsters have said they are “limpiando” or “cleaning” the areas of anti-social elements — exactly the same word used by Colombian paramilitaries to justify their actions.

“You can absolutely see the parallels between the groups from these two countries,” said Adam Isacson, of the Washington Office on Latin America, an NGO. “If you go to a neighborhood controlled by some Mexican cartels it can look very similar to those dominated by paramilitary groups in Colombia.”

Isacson pointed out that the Colombian paramilitaries who rose to power in the 1990s were often controlled by drug traffickers. The militias then developed an anti-communist ideology as they fought leftist guerrillas, who kidnapped wealthy landowners.

In Mexico, there's no real threat from communist guerillas. Instead, Mexico’s new narco-vigilantes claim they are waging their war against the Zetas for the kidnappings and other violence they commit.

That has won them sympathy in some drug-ravaged areas from Mexicans fed up with the bloodshed. Some Zeta Killer videos posted on youtube have more than four million hits.

Hundreds of comments underneath them hail the gangsters as heroes.

“Very good boys. We need somebody to finish these chumps who are terrorizing society,” said one comment. “If General Pancho Villa lived today, he would have shot down these Zetas.”

Jaime Guerrero, an accountant who lives in the Veracruz city of Cordoba says people are so fed up that he can understand why they support a vigilante group.

“I don’t support paramilitaries," he said. "But something needs to be done. There is kidnapping everywhere, and the police are corrupt and doing nothing to stop it. People are very desperate, and so now they will take desperate measures.”

However, observers warn that when citizens start supporting paramilitary groups to attack criminals it can lead to disaster.

In Colombia, the paramilitaries carried out brutal massacres of civilians accused of supporting the guerrillas before they officially disbanded in 2006.

“Mexico has to assert its monopoly of legitimate force,” Isacson, the analyst, said. “If the use of paramilitaries proliferates in Mexico, perhaps you will have to start talking about a failed state.”