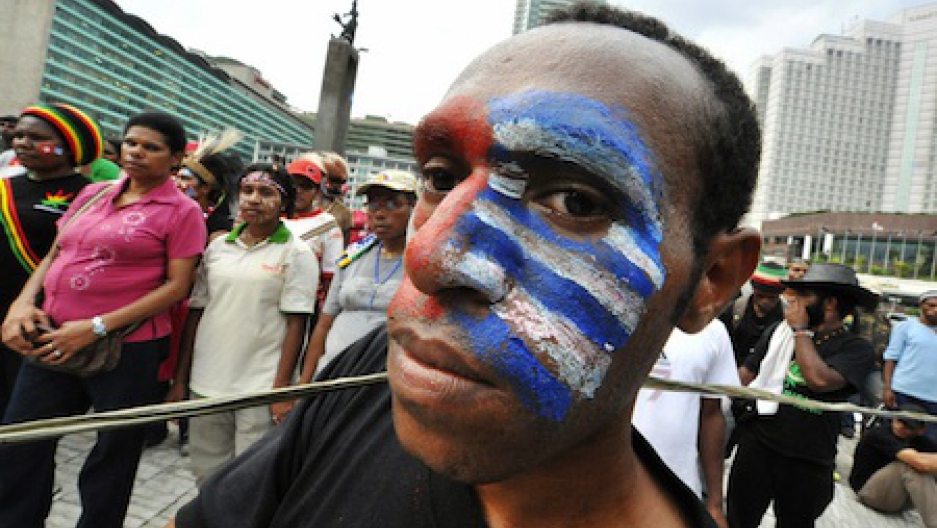 A Papuan man with his face painted with the 'free Papua' flag takes part in a protest in Jakarta on December 1, 2008. Thousands also protested amid tight security across Indonesia's vast Papua region to call for independence from Jakarta.
Credit: BAY ISMOYO
Share

Tension has returned to Indonesia's jungled Papua territory as a declaration of independence triggered retaliatory gunfire from troops.

According to the Jakarta Globe, a group of 5,000 that included well-known independence leaders declared autonomy at a large rally in the territory's capital. In doing so, they proclaimed that Papuans would elect their own president and revive a defunct colonial Dutch currency.

What happened next is, so far, a bit confusing. Outlets such as Channel News Asia report that security forces stormed the rally, beat participants "black and blue" and rounded up hundreds.

Indonesia is a sprawling series of islands, several of which have seen separatist insurgencies over the past decades. Though most separatist movements have been quelled, many in Papua are still agitating for independence.

Foreign journalists are typically prohibited from entering the territory, where simply raising the independence flag can bring severe beatings.