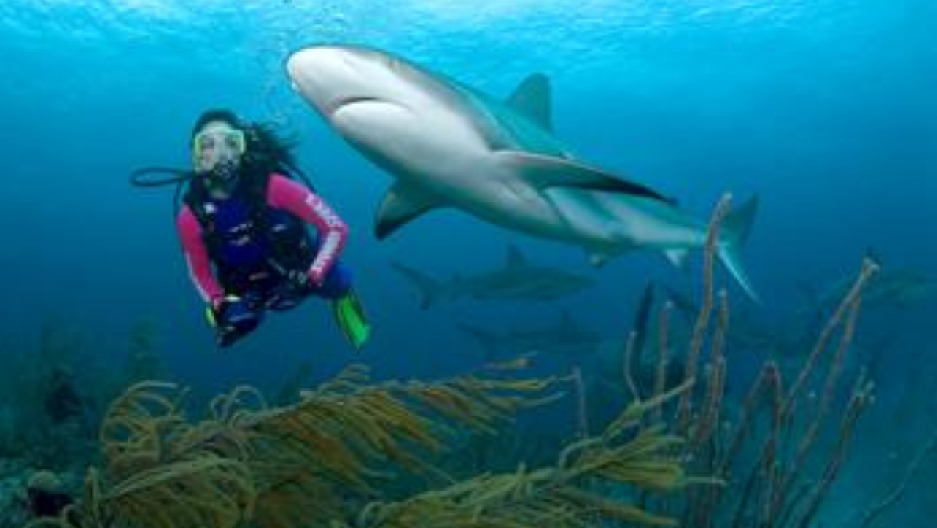 A diver swims with a shark in the Bahamas (Image from Stuart Cove diving company.)

Shark populations are threatened around the world.

Well, most of the world.

In the Bahamas, the shark population is thriving because the government has banned commercial fishing and there's no history of eating shark fins. Those two practices — accidentally killing sharks in fishing operations and intentionally hunting them for their fins — are the cause of the greatest number of shark deaths across the globe.

With a poulation that's stable and even growing, the Bahamas is trying to become the capital of shark tourism.

"We’ll have two really, really cool dives this afternoon," dive master Chang Chin tells his tourists. "The first one’s going to be along the wall and it’s going to be a free swim with the sharks. All you’re going to see down there is sharks. They are going to be all underneath you, circling around as you make your way down the line."

Chin works for Stuart Cove, the owner of the largest dive company, which runs out more than 60,000 tourists each year. It's a $79 million business, across the entire country.

"We went from being a little, sleepy two-boat operation to growing very quickly into a major force in the dive industry. Everybody wanted to come and dive with the sharks," Cove said. "We’ve got a lot of people coming to the Bahamas for the sharks, and dropping, you know, a couple thousands of dollars a person into the local economy."

The divers will head down and literally swim amongst the sharks while Chin lures them with bait. The sharks are so intent on the fish and other food that Chin has, they'll completely ignore the divers, like Debbie Varela of New York City.

" I’ve been in love with sharks since I was a kid. They’re so calm and they just command a certain respect that I was just mesmerized," Varela, a physician, said.

More about "Living on Earth."