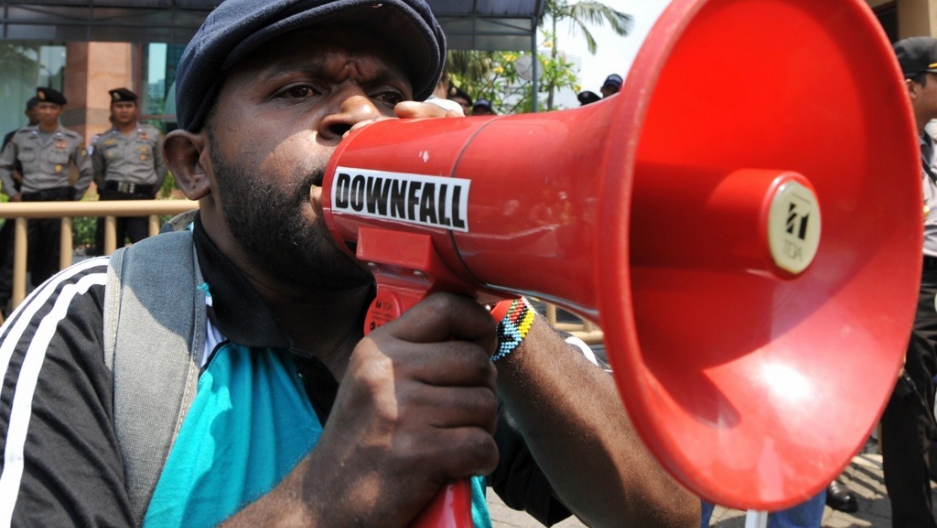 An Indonesian man leads a protest outside the offices of U.S. mining company Freeport in Jakarta on July 31, 2009.
Credit: Adek Berry
Share

JAKARTA, Indonesia — As the Occupy Wall Street movement spreads like dominoes, resentment toward corporate greed has led to the deaths of four Indonesians and the temporary closure of the American-owned Grasberg mine, one of the world’s largest gold and copper mines, in the remote region of West Papua.

Workers at the giant mine, which is owned by the U.S.-based Freeport-McMoran, are on strike for the second month straight. Although the company says it has managed to hire outsourced workers to prevent any significant slowdown in production, that all changed on Monday when the mine halted production for security reasons. Markets, however, have yet to react to the closure.

Workers at Freeport’s Grasberg mine — which accounts for more than 90 percent of the company’s gold output — receive a minimum of between $1.50 and $3 an hour, the lowest of any Freeport-McMoran operation worldwide.

“The question is,” asks John Rumkoren, a native Papuan Freeport worker who has been researching the numbers online, “If Freeport has such high profits and low production costs, why can’t they pay us the same as they pay their workers in North and South America and Africa?”

Some 80 percent of the mine’s 12,000 workers have been on strike since Sept. 15 and say they will continue until their wage demands are met. As negotiations between the company’s management and its workers have failed to reach an agreement, the situation has rapidly deteriorated.

In a violent clash between protestors and police last Monday, one Freeport employee was shot dead and six others were injured. An ambush on Friday, which police claim was the work of Papuan separatists, resulted in the death of three others.

For both Papuan workers and the tribes that live around the mine, tensions that have been brewing for decades appear to have reached a tipping point. Current strikes are the longest in history, with workers criticizing the U.S. company for not sharing its profits and having no Papuans on its management board. In the surrounding villages, tribal elders have publicly derided Freeport for failing to live up to its promises to give back to Papuan society.

“We want Freeport to contribute to our lives and develop our society through education and human-resource development, not through money or the military,” said Rumkoren, who has been working at Grasberg for the past decade.

Canada: Where the Occupy movement began

The local government in Papua has been fighting for a divestment of shares to local companies, which is required by law after a given period of time. But the exact divestment amount is still in dispute and the mine remains controlled by Freeport.

According to Freeport McMoran’s 2010 sustainability report, the company gave more than 1 percent of its profits ($189 million) to local communities in its operations around the world. In Papua, this included HIV training and donations to a number of community programs.

Despite the efforts, for many Papuans the multinational company has become synonymous with human-rights abuses, inequality and continued poverty, a situation they are increasingly unwilling to accept.

“Freeport has been in Papua for 44 years, but they have not contributed to Papuan society at all. Contributions from Freeport only go to the police and the military and they [police and military] only come and kill us,” said Rumkoren, who is a member of the Freeport Worker’s Union.

Human-rights groups have voiced concern over why police opened fire at Monday’s rally. Rumkoren said that workers have been intimidated by Freeport security during the strikes.

“There is one security guy from America who has intimidated us by slashing the tires of our cars so the workers cannot get to Timika and have to stay at the mine and do their work,” he said.

Related: In Indonesia, US company is in the crosshairs

With foreign journalists restricted access to the politically sensitive region — Papua has long been marked by a struggle for independence — it is difficult to verify such claims. However, cables released by WikiLeaks late last year noted that Freeport paid millions to the Indonesian Army to protect its operations around the Grasberg mine.

“Freeport did whatever they wanted there up until about 1995. They had no one to oversee them and the military couldn’t care less,” said Denise Leith, author of “Politics of Power: Freeport in Suharto’s Indonesia.”

Leith said that Freeport essentially entered an isolated hunter-gatherer society at a time when most Papuans had never seen electricity or a car, let alone a helicopter.

“But the Indonesian government didn't give a damn about the West Papuans and just wanted Freeport's money. Freeport wrote its own contract. They [the government] were just really pleased to get Freeport in there,” Leith said.

The Grasberg deal was the first big international contract in Indonesia and was signed by the country’s former authoritarian ruler, General Suharto, in 1976. Today, Freeport remains the single-largest taxpayer to the Indonesian government, contributing more than $1 billion in the first six months of this year.

With Indonesia’s economy thriving on the back of a commodities boom and vast natural resources, companies such as Freeport have been booking record profits. But very little of that appears to be trickling down to the lowest echelons, especially in the poor and underdeveloped region of Papua.

Analysts say the labor unrest is fueling longstanding socio-political problems and could ultimately lead to the closure of the mine.

“Many say Papua is a very rich land with poor people. Papuans do not feel like masters of their own land. If the government and Freeport are not careful, we could have the same situation as the Bogainville mine in Papua New Guinea,” said Ikrar Nusa Bakti, a political analyst from the Indonesian Institute of Sciences.

Operated by Rio Tinto, an Australian and British multinational, Papua New Guinea’s Bogainville copper mine was forced to close in 1989 after social unrest led to an armed uprising against the company and the government.

But Grasberg is not the only place disenfranchised Indonesians are voicing their discontent. Jakarta-based risk consultant Todd Elliott said that growing inequality is driving other resource-driven conflicts across the country.

“We see this everywhere, in Sulawesi, in Kalimantan. There is a huge wealth gap and it’s getting wider. Indonesia’s wealth is not evenly distributed. We have seen it in attacks on other mining operations that promised to employ a certain number of people and build infrastructure, but they didn’t, so the locals attacked them,” he said.

Protestors in Papua have blocked the road to the mine with heavy machinery, and a pipeline used to channel gold and copper to a port has been cut in several places, which led to the mine’s closure.

Rumkoren, who is working with activists to update information about the Freeport victims on their Facebook page, says he and others are determined.

“We will close Freeport until James Moffett comes,” he said, referring to Freeport-McMoran’s chairman.

“If we don’t close Freeport we will all be finished because of the police and the military… It is our right and our responsibility to do this.”