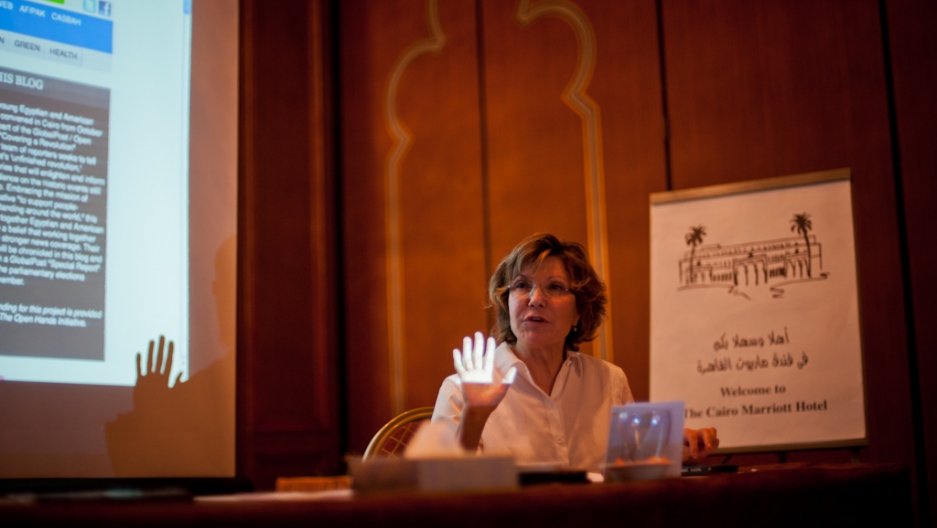 CAIRO — It's report card time for the Arab Spring, and veteran NPR Middle East correspondent Deborah Amos is doing the grading. While Egypt did A+ work in ousting former President Hosni Mubarak, she gives opposition groups in Syria higher marks than their Egyptian counterparts when it comes to organization.

“Egypt's revolution ended, and there was a huge chasm,” she said, addressing the GlobalPost / Open Hands Initiative "Covering a Revolution" Fellowship on Saturday. “Nobody knew how to do politics.”

Fresh off a five-week reporting trip in Syria, Amos said Egyptian opposition groups “were not so good at what to do next" compared to the Syrians who are “are building civil society ahead of the collapse” — or the hoped-for collapse — of President Bashar Al-Assad's regime.

Protests against his rule first began in the country in March. The mass demonstrations, inspired by events in Tunisia and Egypt, resulted in a brutal government crackdown that rights agencies estimate has left some 3,000 people dead.

But Amos — a self-described “Arab Spring junkie” — said Syrians are not backing down.

“There are clinics, there are doctors, you get shot, and you end up at a stranger's house but you know they will take care of you, they don't even want to know what your name is, someone will pick you up off the street and smuggle you across the border to Lebanon if you're shot in the face,” she said, adding, “I just met somebody exactly like this.”

Syrian civil society is organizing itself at a grassroots level, she explained, citing an unofficial non-governmental agency now preparing for parliamentary elections.

“Why would they do that?” she asked her contacts there. "Syria has no parliamentary elections." But the answer was,” she said, “'Because we watched [the Egyptian opposition group] April 6, and we've learned from their mistakes.'”

But lest you accuse her of favoritism, Amos won't give the Syrian opposition straight As.

“They squabble,” she said. “The older generation [of dissidents], who all went to jail — they paid a price — kind of are jealous of the kids. They are, there's no doubt about it. There are personal politics involved, because these [older] people understood you could go to jail for writing a newspaper article, but never really thought you could organize with the grassroots and have a movement."

In this respect, she said, “they get a C-minus.”

The old guard doesn't understand the young generation because growing up in Syria today, Amos said “you are steered away from taking any social science courses” so “you have an entire generation of people who are computer scientists.”

This, she said, “has fueled the revolution,” describing it as an uprising “that covers itself” with media teams “in every city.”

Syrians also boast a large, politically active — and wealthy — diaspora, some of whom have been busy in Egypt itself.

On Sunday (October 16), they protested a call by Arab League foreign ministers for a meeting between the Syrian government and the opposition at the Arab League headquarters in Cairo within the next 15 days.

A spokesperson for the Syrian opposition in Egypt, Mohammed al-Hemsy, responded Monday saying, "no one has the right to make dialogue with such a regime whose hands were splashed with the innocent Syrians' blood."

Egyptians themselves, meanwhile, are also following developments in Syria. In Cairo's Tahrir Square, seen as the epicenter of anti-Mubarak activity in January and February, t-shirts celebrating Mubarak's overthrow hang alongside those calling for a free Syria.

“We're still waiting for what's going to happen in Syria,” he said, adding that the end of the regime there could “help the rest of the Arab world protests to move forward.”

“We're waiting for it as a sign of hope,” said Abdelfattah.