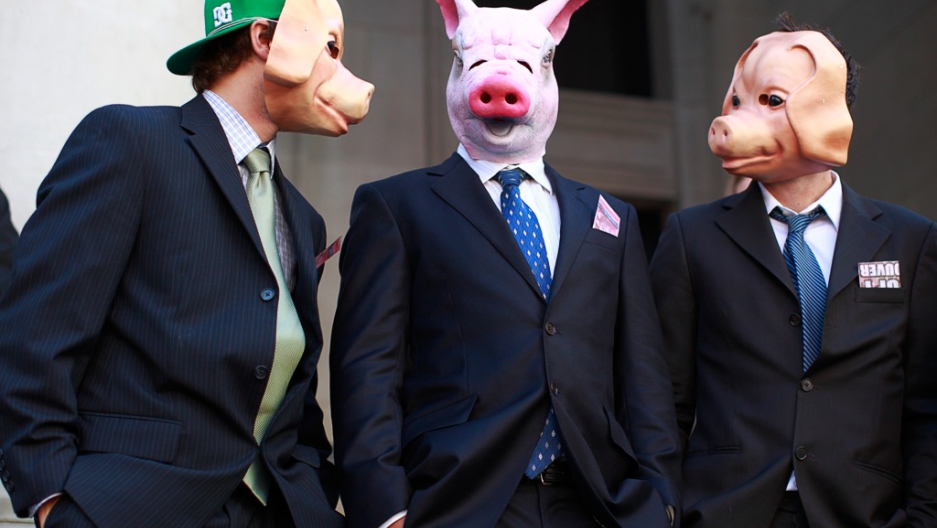 TORONTO, Canada — It was a homecoming of sorts this weekend as the Occupy Wall Street movement made its way north.

Thousands turned out in peaceful protests in more than a dozen cities across Canada, with the largest rally— about 4,000 protesters— appropriately enough in Vancouver, the cultural center of the country’s laid-back left coast and home to the spark that lit the fuse.

And, sure enough, they did.

The resulting movement, now global in scale, is the high-water mark of what can now arguably be called the most influential magazine in Canadian publishing, a high-quality bimonthly that takes no advertising, survives on subscription and newsstand sales, and has been shaking its glossy fist at corporate culture since 1989.

Occupy Wall Street: Could the Democrats derail the movement?

The success of it all has caught co-founder and editor Kalle Lasn by surprise.

“I feel like this is the first time in the 20-plus year history of Adbusters that we really have a chance to pull something off,” he told an interviewer last week.

It’s not been for lack of trying.

Lasn’s magazine has been a loud proponent of anti-consumer activism, and the impetus behind a number of international campaigns — including Buy Nothing Day and TV Turnoff Week — aimed at educating and swaying a public evidently mesmerized by the power of advertising.

The magazine promotes and practices “culture-jamming,” the art of subverting commercial messages to reveal the real agenda of the corporations behind them.

From its beginnings, it has portrayed itself as the antidote to what it sees as the powerful propaganda techniques of capitalism.

Its inaugural issue spoofed an advertising campaign by the British Columbia logging industry, which in the late '80s was under fire for laying waste to vast, previously pristine swaths of west-coast rainforest — yet was trying to portray itself as environmentally friendly.

Over the years, Adbusters has targeted large corporations such as McDonalds, Calvin Klein and Nike, the latter famously the focus of its ‘unswooshing’ anti-ads. It has gone to court for the right to show anti-consumer ads on television, and its pages have featured the works of well-known culture critics and writers including Christopher Hedges and Matt Taibbi.

In his book "Culture Jam: The Uncooling of America" published in 2000, Lasn vividly describes his own personal epiphany on the road to anti-consumerism.

It involved an otherwise ordinary trip to the supermarket.

“I was plugging a coin into a shopping cart when it suddenly occurred to me just what a dope I was,” he wrote. “Here I was, putting in my quarter for the privilege of spending money in a store I come to every week but hate, a sterile chain store that rarely carries any locally grown produce and always makes me stand in line to pay.

“And when I was finished shopping I’d have to take this cart back to the exact place their efficiency experts have decreed, and slide it back in with all the others carts, rehook it and push the red button to get my damn quarter back.”

A “little internal fuse blew,” wrote Lasn. Instead of recovering his quarter and just walking away, he jammed a bent coin into the cart’s mechanism, making it in operable.

It’s a considerable distance from that small, local act of rebellion to a movement that is challenging the titans of Wall St. and spreading rapidly across the globe.

"This idea of occupying the iconic centre of global capitalism ... there was something magical about that right from the start,” Lasn said in an interview with the Canadian Braodcasting Corporation. “So I knew something very special would happen there on Wall Street.

“But I had no idea that it would spread to hundreds of cities all around the place and become this possibility of a global mind shift."

It’s certainly no small irony that OccupyWallStreet originated in Canada.

This nation escaped the worst of the market collapse of 2008, in part because the federal government had consistently resisted attempts to deregulate the banking sector.

Canada’s unemployment rate has been relatively stable, its social programs remain generous by U.S. standards, the housing market did not collapse, and post-secondary tuition is a bargain by comparison. That may explain the relatively modest numbers that have turned out in cities like Toronto, Halifax and Vancouver over the weekend.

Nevertheless, and contrary to the oft-criticized amorphous goals of the movement he helped start, Lasn has a clear idea where it should go next.

Adbusters is now calling for worldwide protests October 29 — with the goal of attracting 50 million people just days before the G20 meets in France — to demand the implementation of a one per cent “Robin Hood tax” on financial transactions and currency trades, a move that could raise billions for cash-strapped governments.

(Editor's note: This story has been updated to clarify that Victoria, not Vancouver, is the official capital of British Columbia. Vancouver is considered its cultural center.)