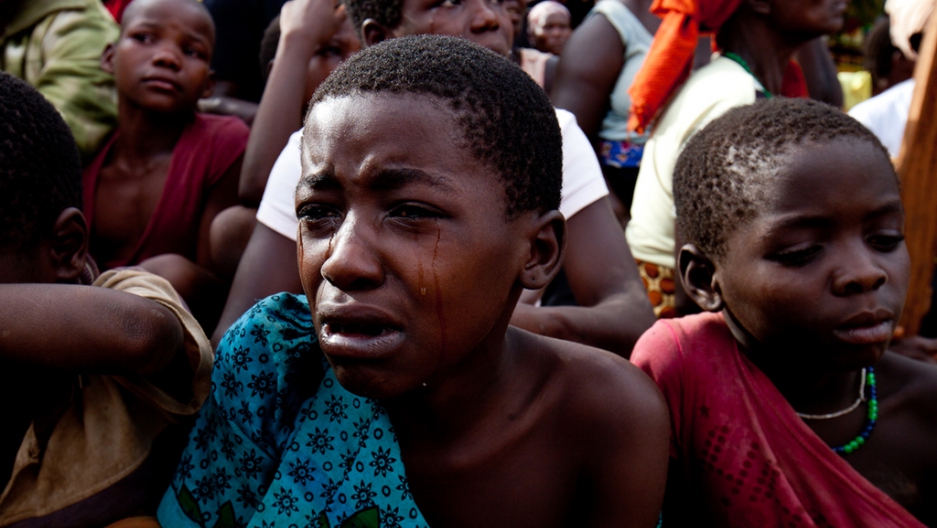 The Lord's Resistance Army (LRA) is spreading violence across South Sudan and other countries in central Africa. Here South Sudanese children cry at the funeral of Gabriel Makana, who was ambushed by the LRA and his body was mutilated. Makana was a popular employee in South Sudan's ministry of education who brought schools to rural areas.
Credit: Trevor Snapp
Share

President Barack Obama's announcement to Congress Friday to send 100 U.S. troops, also known as combat-equipped military advisers, to Uganda has sparked a lively discussion on the merits of the plan. But the decision to use the troops as advisers in the fight against the Lord's Resistance Army — a notorious fighting group in the region — leaves many readers with questions about the origin and operations of the LRA in Central Africa.

Here are the top five things to know about the LRA.

1. What is the Lord’s Resistance Army?

The Lord’s Resistance Army (LRA) is a guerilla group with operations throughout Central Africa that has been widely accused of numerous human rights atrocities, including the rape, killing and enslavement of civilians, including children. Read more from GlobalPost.

Led by mystic Joseph Kony, the rebel group began its fight to overthrow the Ugandan government in 1987 to seize power from President Yoweri Museveni, who has been the leader of the country for the last 24 years.

Since then, it is estimated the militia has been responsible for at least 30,000 deaths over the last 20 years. Read more from GlobalPost.

Kony, a self-proclaimed prophet from God, claims to seek a world based on the Ten Commandments, though the commander has become well-known for his violent cruelty.

Kony is a product of the Holy Spirit Movement, which was started by his aunt, a tribe mystic, Global Security reported. The movement initially sought to retake Kampala, the capital city, to redeem the Acholi tribe from the violence they had committed toward others and “initiate a paradise on earth.”

The Holy Spirit Movement failed, but when Kony inherited power from his aunt, he kept the religious aspect of the movement when he created the Uganda Christian Democratic Army in his attempt to overthrow the Museveni government. In 1991 Kony changed the name to the Lord’s Resistance Army.

3. Where does the group operate today?

Despite the launch of a peace process after the end of the Ugandan civil war in 2006, GlobalPost correspondent Tristan McConnell writes that "the rebel group, which first emerged in Uganda in 1987, had been scattered into small ineffective units by a series of harassing assaults in late 2008 and early 2009."

Those units count bases in many of the countries neighboring northern Uganda. In President Obama’s letter to Congress outlining his plans to send troops to Uganda, he wrote: “The LRA continues to commit atrocities across the Central African Republic, the Democratic Republic of the Congo, and South Sudan that have a disproportionate impact on regional security.”

4. Was Rush Limbaugh right about the LRA?

American talk show host Rush Limbaugh inspired a litany of calls to his show when he said that Obama is “targeting Christians” by fighting the LRA. After being flooded with complaints, Limbaugh said he would do more research on the LRA.

But under Kony, the militant group has been accused of human rights abuses and war crimes — even against Christians.

More: Sudan and the LRA

The LRA allegedly crucified seven Christians in Sudanese villages in 2009, according to the Catholic Herald.

"One of the men was tied to a tree and mutilated while six other victims were nailed to pieces of wood fastened to the ground and killed," the Catholic Herald reported. "Villagers who found their bodies near the town of Nzara said it was like a 'grotesque crucifixion scene'."

The brutality inflicted on children has inspired the creation of several human rights organizations, such as the Invisible Children movement.

A Human Rights Watch report estimated that the LRA has abducted more than 20,000 children to be used as child soldiers and as sex slaves. Read more from GlobalPost. A common initiation into the soldiers’ ranks for children is to kill their parents so that the LRA becomes their only family.

5. How will the leaders be held responsible?

Rebel leader Thomas Kwoyelo is the first LRA commander to be tried in a domestic court in Uganda for alleged crimes committed during his tenure as a leader in the rebel group’s brutal fight in Central Africa. Kwoleyo pleaded innocent in July to 53 counts of willful killing, hostage-taking, destruction of property and causing injury. Read more from GlobalPost.

Ugandan soldiers captured Kwoyelo, 39, in Congo in 2009, and he is being tried in Gulu, a town in the north of the country with a long history of LRA violence.

He and three other LRA commanders — including Kony — have also gained the attention of the International Criminal Court in The Hague. The ICC has had an arrest warrant out for the four senior commanders since 2005.

If caught and brought to The Hague, Kony will face 12 counts of crimes against humanity and 21 counts of war crimes, which include rape, murder, enslavement and forced enlistment of children, according to the ICC.

All of the leaders are still at large, but it is believed that one of them, Vincent Otto, was killed at the orders of Kony himself. Another, Raska Lukwiya, is believed to have been killed during clashed with the Ugandan army in 2006.

DISCUSSION: What other questions do you have about the LRA? Ask them in the comments section below.