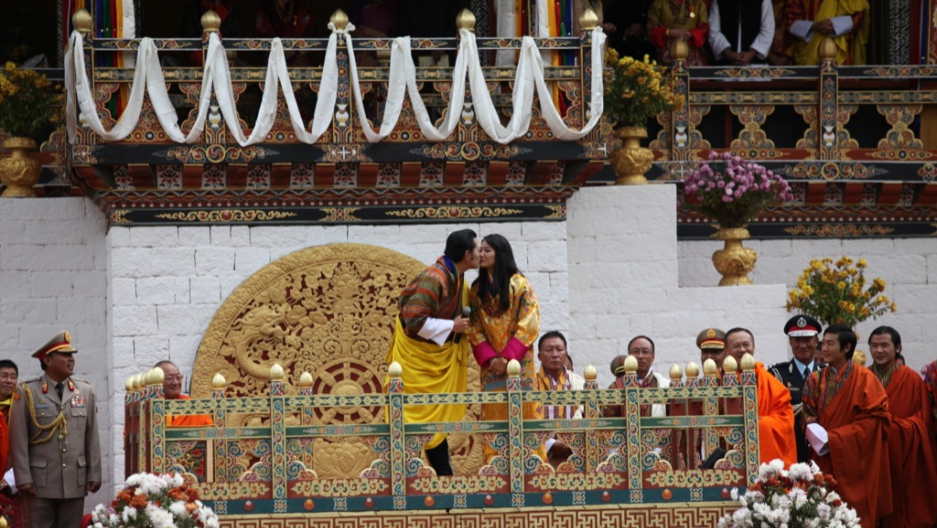 Editor's note: Wanderlust is a regular GlobalPost series on global sex and relationship issues written by Iva Skoch, who is now traveling the world writing a book on the subject.

PUNAKHA, Bhutan — It's the kiss that rocked Bhutan.

Bhutan’s royal newlyweds sealed their marriage over the weekend with their first public kiss. On the lips.

The immensely popular King Jigme Khesar Namgyal Wangchuck, 31, first kissed his 21-year-old bride on the cheek and then asked the 30,000 Bhutanese at the Changlimithang archery stadium if he should kiss her on the lips. After a second of silence, the packed stadium roared: “Yes!”

And so he did.

“Did he really just kiss her on the lips?” locals asked immediately after, unsure whether to be scandalized or excited. Either way, it is clear that the fifth King of Bhutan will go down in history as the first monarch of the Land of the Thunder Dragon to kiss his wife in public. On the mouth, no less.

"It has never happened before. A king has never kissed his wife in public," said Karma Letho, a local tourist guide. "Definitely not on the lips."

The previous king has apparently never smooched in public. But then again, he has four wives and, understandably, the logistics of public kissing could have been a bit more challenging, if not impossibly competitive.

The new king, sometimes referred to as the Modern King, seems to be committed to bringing this fairytale Himalayan kingdom into the 21st century. First, he announced his intention to be monogamous, then he starting dating — and living with — his now-wife well before marriage. They have been seen holding hands in public for months, creating an avalanche of shameless public hand-holding among young couples in the capital.

King Jigme married Jetsun Pema in a Buddhist ceremony on Oct 13 in the Punakha Dzong, about three hours by car from the capital. The next day they walked — as tradition demands — back to the capital, Thimphu, covering a large chunk of the mountainous 45 mile (71 km) distance on foot. Thousands lined up along the road to cheer them along. The journey took 13 hours and the royal couple shook hands, signed autographs and accepted best wishes from citizens who were patiently waiting to get a glimpse of the royal couple for hours. They even let commoners plant an occasional kiss on their cheeks.

This public display of affection is good news for Bhutan, said Letho.

“I think it is very good to show affection,” said the local tour guide. But he is not ready to put it into practice. When asked if he would start kissing his wife in public, Letho laughed sheepishly and said: “No. I don’t think so.”