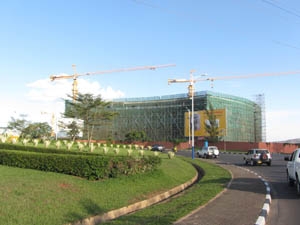 “It’s nice living here,” says Edward Yin, 39, who moved to Kigali four years ago to set up a mobile phone factory. “People are friendly, and generally honest. In China, people can be pretty tricky. To get from one point to another, they may go in circles. Here, it’s just a straight line.”

Perhaps a bit too straight, for the tastes of some Chinese companies. Rwanda has a strict anti-corruption policy. I ask Yin if he thinks this is good for business. He grins mischievously.

“Sometimes, a little corruption might not be bad for business,” he says. “It helps get things done.”

“I like being in a place that’s tough on corruption,” he says. “My costs are predictable. That’s what’s good for business.”

Li is general manager in Kigali of China Road and Bridge Corporation – the biggest Chinese state-owned enterprise doing infrastructure construction in Africa. In China, if I as a journalist were to ask for an interview for someone of this stature, I’d be asked to send a fax with detailed questions, and proof of my journalist credentials, would be made to wait weeks, and would – far more often than not – ultimately be told ‘no.’

Here, Li came to my guesthouse – his office was a ten-minute walk away – and sat on the veranda for almost two hours, chain-smoking and talking about life in Rwanda.

Li, who’s 49, first came to Rwanda in 1989 to help build road. He left three years later, and then followed news of the 1994 genocide from afar, fearing – and later learning – that he’d lost many friends.

“I came back a few years later,” he said. “I cared about this country. I wanted to see what had happened to it.” He’s now helping expand Rwanda’s road and infrastructure network.

Not all Chinese companies embrace anti-corruption measures quite so enthusiastically as Li, which may be one reason why the Chinese community is small here – a thousand or two — compared to in other African countries.

One Rwandan official told me, rather gleefully, that when a Chinese company won a bid to build a new convention center in Kigali, the government put a German manager on the project – to ensure quality control, and to curb any urges on the Chinese company’s side to pocket some of the budget. “They weren’t happy,” he said, with a sly smile. “But then, we weren’t doing the project for them.”

Anti-corruption efforts or no, Yin likes Rwanda. He likes the weather, the clean air, the friendly and relaxed vibe. He likes it enough to have brought his wife, his two kids and his mother here last year, to live. He says it was a deliberate choice, for his kids’ future.

“In Chinese schools now, kids have to work so hard,” he says. “They have no time to play. They don’t learn to think creatively. My kids, going to school here, will learn that life can be different.” 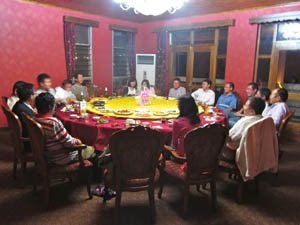 Li appreciates Rwanda’s laid-back atmosphere , too, but has taken the opposite decision related to his own son. He’s back in China with his mother. “If he comes here, he’ll never be able to compete in China. He’ll lose that edge.”

One thing Li and Yin agree on is how much they enjoy their biweekly Friday evening happy hours. A dozen or so Chinese managers get together at Yin’s Chinese restaurant, and sit around a huge round table in a room with deep red walls. They invited me along to one.

The evening grew boisterous as the beer and baijiu – a grain alcohol beloved at Chinese banquets – were tossed back. Jokes and jibes mixed with business talk, in accents from across China. It was a taste of home, a welcome reconnection. But unlike some gatherings of expats – Chinese and otherwise – there was a noticeable lack of griping about their adopted home. To a person, those I talked to said how much they like Rwanda. If these Friday evening happy hours are a kind of brief holiday for Chinese in Kigali from their expat life here, it seems their expat life here is its own extended holiday from the stresses of life in relentlessly ambitious China.