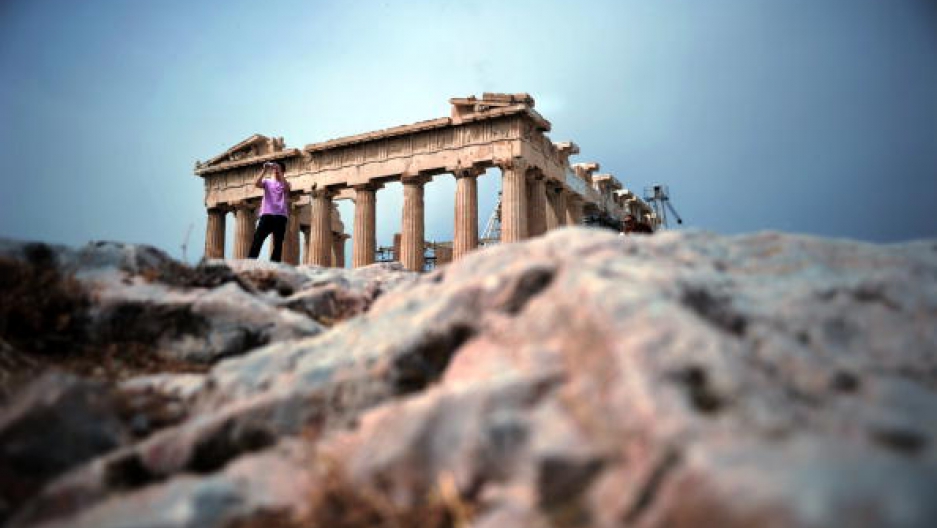 A tourist takes pictures at the Acropolis archeological site in Athens on May 8, 2010.
Share

And long-awaited answers on Greece’s future are expected by October 23 when European Union leaders meet in Brussels to make decisions about future bailout loans. The G-20 leaders said in a statement Saturday that they expect the
Brussels summit to "decisively address the current challenges through
a comprehensive plan."

Beyond that near-term horizon are seldom-asked questions. What can we expect for the future in Europe? And how likely is it that an embattled country like Greece will emerge from the crisis in serviceable shape?

From Greece: "Don't blame us"

That’s a question Greek Prime Minister George Papandreou has been answering recently, in an effort to reassure European lenders and his compatriots that a better future awaits.

Papandreou acknowledges that Greeks face a monumental or seemingly Sisyphean task of rebuilding the economy, which is forecast to shrink by 5.5 percent this year. But he has portrayed himself as an optimist, believing that the crisis-driven change will forge lasting improvements.

“We need to lead to sustainable growth and investments because Greece has great potential, but this potential has in the past been mismanaged,” he said Thursday after a meeting in Brussels with European Council President Herman van Rompuy.

“That’s why we are moving ahead with major reforms — radical changes that we are implementing throughout the Greek economy and in the public administration to guarantee competitiveness, productivity, growth, transparency and social justice,” Papandreou said.

Papandreou’s administration, which inherited debt of $400 billion when he took office two years ago this month, has raised taxes, slashed public sector wages and pensions, consolidated agencies, and is trying to attract investors by making it easier to do business here.

It has also passed legislation opening dozens of “closed” professions, which will raise competitiveness and productivity – assuming the law is enforced.

Papandreou has pointed out that Greece is exploiting its comparative advantages. It is targeting new markets for tourism, which is up this year. Government officials also have high hopes for Project Helios, a $27 billion plan to export solar power.

But is the prime minister – a socialist who has betrayed his ideological roots by imposing a painful deficit-reducing program under pressure from foreign lenders – merely putting a positive spin on things? Or is it possible that the crisis will retool Greece into a leaner, stronger and more modern state?

Despite boisterous street protests by opponents of the changes, many agree that Greece was in dire need of reform.

The country’s economic model was “fundamentally flawed and no longer possible,” said Vagelis Agapitos, an independent economist in Athens.

A 2010 report by Eurostat, the EU’s statistical arm, gave high marks to the continent’s governments and business communities regarding investment in innovation, research and development. The exceptions: “Only the innovative enterprises of Greece and Portugal seem to need to invest heavily in machinery, equipment and software.”

Greece’s bureaucratic red tape means it’s easier to do business in Guyana or Ethiopia, according to this year’s World Bank survey. Greece ranked 109th out of 183 countries in terms of ease of doing business.  Greece expects its ranking to improve in the next annual report, to be released later this month.

Time will tell whether the country will emerge stronger. Indonesia and Russia, among others that have suffered financial crises, have bounced back. But those countries had the “luxury” of devaluing their currencies, which boosts export revenues because of lower prices. Greece, of course, is tied to the euro.

For the moment, there’s little evidence of a brighter future.

“The problem,” Agapitos added, “is that not everyone realizes [the old] model is no longer in operation.”

Trash is spilling into Athens’ streets because garbage collectors are on strike. A second nationwide general strike this month is planned October 19. Workers are threatening to block production of electricity bills, which the government is using to collect unpopular new property taxes.

“I do find it difficult to be optimistic. It’s in very deep trouble,” said Simon Tilford, chief economist at the Centre for European Reform, a London-based think tank. “Greece could have a truly awful 10 years.”

Structural reforms must be accompanied by investment, he cautioned.

“Investment in the Greek economy has collapsed,” he said. “The other problem is it’s difficult to maintain political support. That puts the government in a difficult position. Unless you can point to a payoff with these structural reforms, they are difficult to implement.”

Greece’s troubles were many years in the making. Awash in cheap credit when it dropped its drachma for the euro, the country engaged in an expensive military arms race with rival Turkey. Greece’s military spending in 2009 was equivalent to 4 percent of its GDP, by far the highest in the EU, according to World Bank statistics.

At the same time, it paid generously toward retirement pensions, and its tax collection system fell into disrepair with internal corruption and massive cheating by all classes of Greeks.

Greece’s “troika” of lenders — the International Monetary Fund, European Commission and European Central Bank — are expected to give Greece the next installment of a $150 billion bailout negotiated in May 2010. Without that $11 billion installment, Greece would go broke in the upcoming weeks.

The troika said in a joint statement this week that a deeper-than-anticipated recession means economic recovery will only begin from 2013 onwards.

“There is no evidence yet of improvement in investor sentiment and the related increase in investments, in part because the reform momentum has not gained the critical mass necessary to begin transforming the investment climate,” it said in the statement.

But exports are rebounding. That, along with lower labor costs “should lead to more balanced and sustainable growth over the medium term,” it added.

The troika warned, however, that the government’s plan to raise $50 billion by the end of 2014 by selling off state assets was off to a slow start. Targets for this year will be missed.

A second loan of $150 billion agreed to in June calls for Greek bondholders to take a 21 percent loss, but many experts say a larger write-down is inevitable. Greek officials have insisted that’s not the case, although the prime minister told his cabinet on Wednesday that they are negotiating “in every way we can” to reduce the debt.

Papandreou says the October 23 summit of European leaders must “decide on a comprehensive and lasting solution to the crisis in the euro zone.” He said finality is “crucial” for Greece and the world.

“We need to ensure confidence and calm in the markets,” he said Thursday.

“This will not happen, as it will not happen that we will have to face a Greek default,” he told reporters Thursday after meeting with Papandreou in Brussels. “Everything will be done in order to maintain the financial stability of the euro area. We will be as helpful as far as we can to Greece.”

Even as reforms gain speed, it will take “one or two decades to rebuild the economy on a sustainable basis,” said Dimitris Malliaropulos, economic research advisor at Eurobank EFG in Athens.

“In the meantime, unfortunately, Greece will have lost its most precious human capital, as the young people with the highest qualification will have emigrated,” he said.

His office is on the campus of his alma mater, the University of Athens. But during one recent sunny afternoon, he explained he couldn’t access it because students were occupying the building in protest of a new law aimed at modernizing higher education.

“I’m not allowed to enter it,” he said, noting that he and co-workers resort to whispering in a library in order to get work done. “It’s quite frustrating… I want to be optimistic but I can’t.”