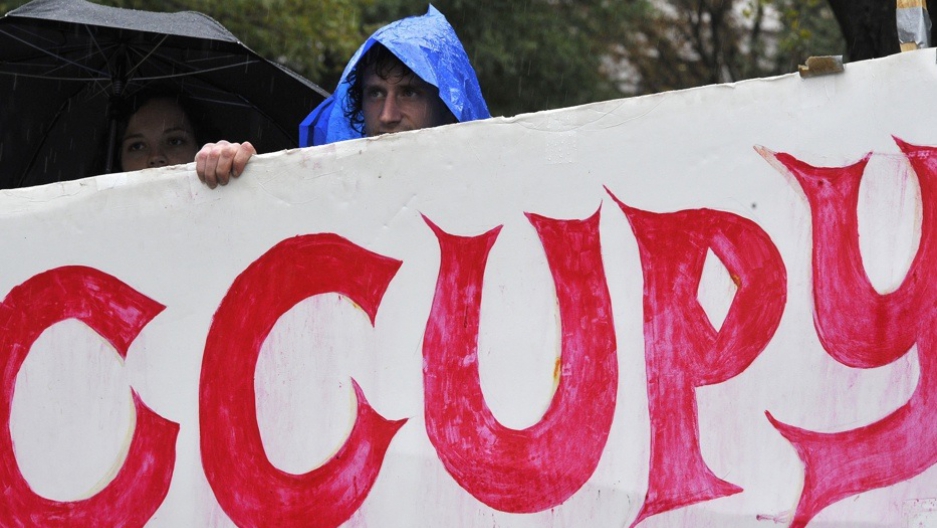 If the Occupy Wall Street protests are following the arc of the Arab Spring, the recent support for the movement given by the Democratic Party could be a harbinger of bad things to come.

Last week, a month after the protests began in a park in New York City, the Democrats appeared to launch a coordinated effort to climb onto the bandwagon. The Democratic National Campaign Committee circulated a petition calling for 100,000 supporters to “stand with” the anti-Wall Street protesters.

House Minority Leader Nancy Pelosi, a Democrat, told ABC News that she supported “the message to the establishment, whether it's Wall Street or the political establishment and the rest, that change has to happen.”

“You are still seeing some of the same folks who acted irresponsibly trying to crack down on abusive practices that got us in the situation in the first place," he told reporters. "I think people are frustrated."

That the Democrats would try to harness the energy of the anti-Wall Street movement in an election year seems hardly a surprise, especially as the protests spread to cities across the country and, today, across the world.

From Singapore to London to Berlin, protesters around the globe — inspired by the demonstrations in the Middle East and North Africa over the last year that toppled some of recent history's most-entrenched authoritarian rules — are following New York's lead on Saturday, holding similar “Occupy” protests, reflecting a worldwide frustration with what they say is prolonged and unsustainable economic inequality.

Although by voicing their support for the movement the Democrats might help to galvanize voters for next year's presidential election, in the long-term it could have a debilitating effect on the protests themselves, and ultimately derail them. That is, if the lessons of the Arab Spring — that model to which Occupy Wall Street has repeatedly turned to — are anything to go by.

Protest organizers in the Middle East said that when a political party turns a demonstration into a political opportunity, the protest's legitimacy is inevitably called into question, and can cause serious problems down the road.

“When Yemen's opposition joined the protest movement, they gave it short-term momentum at the cost of long-term stability,” said Gregory Johnson, an expert on Yemen at Princeton University.

Months after ordinary Yemenis dared to take to the streets to protest the rule of President Ali Abdullah Saleh, the country's feeble political opposition finally entered the fray. It set up tents, commandeered microphones and raised the ire of both protesters, who viewed them as little better the the president, as well as the ruling administration, which began to view the movement as a political ploy.

Perhaps most devastating, when the international community came to broker a peaceful transfer of power, it held negotiations not with the independent protesters that started the movement, but the political opposition.

The deal that was ultimately put forward included immunity for Saleh and his family, a concession that the protesters, who had been repeatedly and brutally attacked by the president's security apparatus, had always refused to accept.

“Despite all the efforts, lives and injuries paid for the sake of freedom, the youth still feel they are being manipulated by a politicized game. Our peaceful revolution is by the people and the gains expected are to the people ... We wonder why is this revolution being treated as a political conflict?” Faizah Sulimani, a spokesperson for the youth movement in Yemen, asked GlobalPost in an interview in May.

No deal was ever struck, the protests have since lost momentum, and Saleh remains in power.

In Egypt, too, it was weeks before the Muslim Brotherhood, the country's largest opposition political party at the time, arrived in Tahrir Sqaure. Its arrival shifted attention away from the demands of the protesters to the possible agenda of the Muslim Brotherhood, which many in the international community associate with Islamic conservatism, despite its primary role as a political party.

In Bahrain, where a protest movement was swiftly crushed, it was the heightening of demands by infiltrating political parties that ultimately drew the king's anger.

Protesters in Bahrain, at the beginning, called for more moderate changes, like a constitutional monarchy, an end to corruption and job discrimination against Shiites, who represent a majority of Bahrain's population.

The hardline political opposition, however, began calling for the royal family to be overthrown and all hell broke loose.

Although mayors in New York City, Boston and elsewhere in the United States are becoming increasingly impatient, it is unlikely that the result will be widespread violence of the kind endured by protesters in the Middle East.

But the last week was dominated by news of how the Democrats' support for Occupy Wall Street might affect the upcoming election, whether or not it was a smart political move, and the Republican response, which seized the opportunity to pigeon-hole the protesters as hippie, anti-capitalist, liberal Democrats.

Somewhere in the din of this political discussion, the frustrations, demands and messages of the protesters got lost — a situation known all too well to the steadfast dissidents of the Arab Spring.