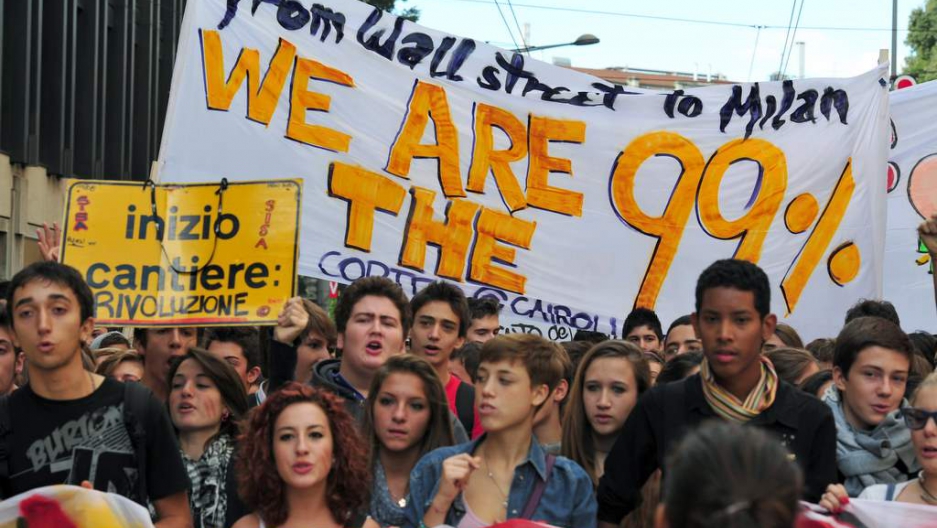 Students crowd a street during a demonstration on October 7, 2011 in Milan. Schools and universities across Italy closed as hundreds of thousands of students have taken to the streets to protest against the government's austerity package, that they say unfairly weighs against the education system.
Credit: GIUSEPPE CACACE/AFP
Share

Police told Reuters that the protesters managed to get into the hallway of the Goldman Sachs offices in Milan's financial district, but were quickly dispersed. The protesters did leave behind some graffiti denouncing Italy's Prime Minister Silvio Berlusconi and saying "Give us money."

Organizers have picked Saturday as the day when protests inspired by Occupy Wall Street will spread to cities outside the United States, but The New York Times reports that the protesters in Italy have "jumped the gun."

In a video posted by the Italian daily Il Fatto Quotidiano, crowds can be seen packing the streets, and throwing things at bank branches. According to the Times, the crowds can be heard saying, of Berlusconi, “We will never have confidence in you, you robbing mafioso," and throwing rotten fruit and vegetables outside the offices of Fininvest, a holding company controlled by Berlusconi’s family.

Earlier on Friday, an expected confrontation between protesters and police was averted when a planned cleaning of Zuccotti Park, where the Occupy Wall Street protests have been centered, was postponed. The protest in New York City began over a month ago, and has sparked similar demonstrations in cities around the country.