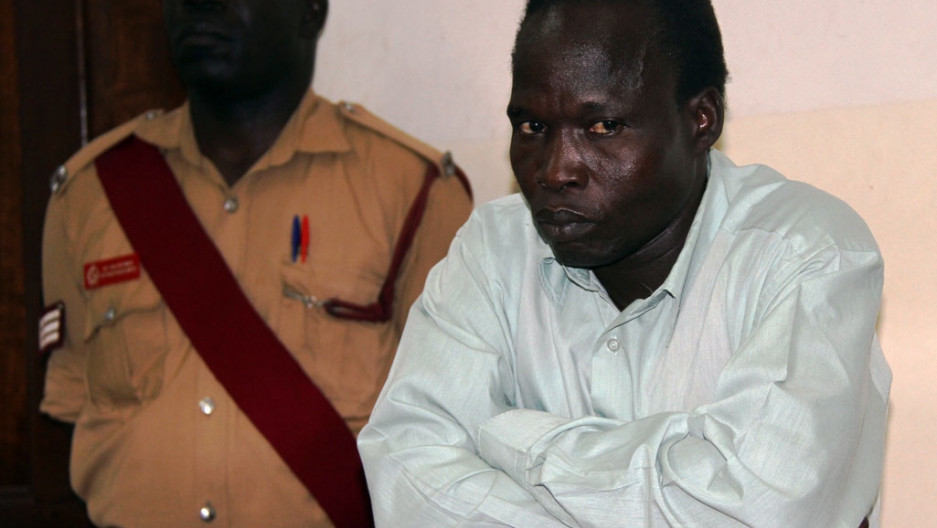 LRA commander Thomas Kwoyelo appeared in a Uganda court this week becoming the first senior leader of the rebel group to go on trial for war crimes in the conflict's more than 20-year history.
Credit: Stringer
Share

President Obama announced in a letter to Congress today that he is sending 100 “combat-equipped” troops to central Africa to help efforts in the fight against the Lord’s Resistance Army (LRA), a rebel group in the region.

In the letter to Speaker of the House John Boehner, Obama said that 12 combat troops were deployed on Oct. 12, and the remaining troops will follow during the next month with further communications, logistics and combat support, according to CNN.  A defense department official explained that the troops will be working in central Africa for a few months in an "advisory role," ABC reported.

"I have authorized a small number of combat-equipped U.S. forces to deploy to central Africa to provide assistance to regional forces that are working toward the removal of Joseph Kony from the battlefield," Obama said in the letter, according to Reuters.

The president wrote that "for more than two decades, the Lord's Resistance Army (LRA) has murdered, raped, and kidnapped tens of thousands of men, women, and children" and that the group "continues to commit atrocities."

Once in Uganda, the troops also could deploy to South Sudan, the Central African Republic and the Democratic Republic of the Congo — all areas where LRA attacks have been reported — with the host-nation’s permission, Al Jazeera reported.

More: Stopping LRA is not all about Kony

Obama specified, however, that the U.S. personnel will not seek to directly engage LRA — which the U.S. considers a terrorist organization — but only act in self-defense.

He said: "The support provided by U.S. forces will enhance regional efforts against the LRA. However, although the U.S. forces are combat-equipped, they will only be providing information, advice, and assistance to partner nation forces, and they will not themselves engage LRA forces unless necessary for self-defense."

According to Global Security, the LRA has been accused of serious human rights violations, including the torture, rape and killing of civilians, including children. Since being pushed out of Uganda into the Congo in 2005, the LRA, led by Joseph Kony, has attacked villages in the neighboring countries, often abducting children and forcing them to act as child soldiers.

At least 30,000 people have died during the 20-year reign of terror inflicted by Kony and his aides, BBC reported, and around 2 million people have been displaced.

The International Criminal Court has had arrest warrants out for Kony and other top commanders since 2005.

GlobalPost facebook fan Owen R. Broadhurst wrote, "Four new war fronts on top of eight or more that we already have involvement in? Who's the warmonger now?"  Fellow GP follower Alex Wiley joked, "How are republicans not totally in love with him? He's the best republican president in office since Reagan."

But Dykstra Garcia commended Obama on his decision, saying, "Educate yourselves on the LRA before making comments that demonstrate your ignorance.  It's about time the US lent some support here.  Kony needs to go."

Bill Vear asked, "Where is the approval Of Congress?  Why is it our job?"

While on Twitter, @shauggy wrote, "I never want to be flippant about warfare, but when I heard Obama was sending troops to combat the LRA I was excited."

Tweeter @hafsamohamed1 seemed outraged when he wrote, "LRA? Obama sends Advisors?Can we quit with the euphemisms?Just say it Obama...You want to wage war on Africa!"