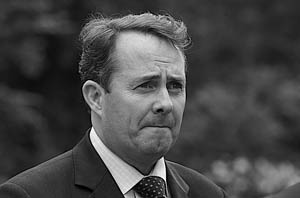 Share
A staunch political ally of the US has stepped down from a key post in the British government amidst a growing scandal. Defense minister Liam Fox resigned on Friday. For days, there have been questions about Fox's judgment in allowing a friend unwarranted access to official government activities — activities that included meetings with American defense officials. And so, Liam Fox has spent a lot of time apologizing in recent days. Last weekend, he thought these words would save his reputation and his job. "I accept that mistakes were made and I should not have allowed the impression of wrongdoing to arise. And I am very sorry for that," Fox said. On Friday, Fox said he was very sorry again — in his resignation letter. He admitted to blurring the lines between his personal interests and government activities. Blurry lines in a department like defense can be risky — even dangerous — to a nation's security. The controversy centered on Fox's friend, Adam Werritty. Despite having no official role in government, Werritty repeatedly attended meetings in Fox's office. He also traveled abroad with him 18 times — including a visit to Tampa where both men dined with senior officers of the United States Central Command. Werritty handed out business cards introducing himself as an advisor to the minister. And there were more questions about just who was financing Werritty's work and travel and what they expected to get in return. When Fox offered to step down Friday, Prime Minister David Cameron accepted and tried to turn the page. "I quite understand why Liam Fox has decided to resign," Cameron said, "and obviously I'm sorry to see him go because he did a good job at the Ministry of Defense, clearing up the mess left by the last government and giving good leadership to that department particularly while we've been in action in Libya and also of course in Afghanistan as well so I wish him well." For the government's opposition though, this isn't the end of the matter. Labor member of Parliament Kevan Jones is still demanding answers about Fox's conduct. "He fell foul of the rules; sorry, the standards we expect of ministers and broke the rules," Jones said. "You can't have a minister ignores the rules that were put in place not to just to protect him, but also the civil service and government." Now out of cabinet, Fox remains a member of parliament and one of the most pro-American voices in British politics. He even set up a charity more than a decade ago to promote ties between the two countries. It recently shut down after regulators deemed it too political. It was another case of blurry lines. Perhaps it was also a foreshadowing of the troubles to come for the now former defense minister.