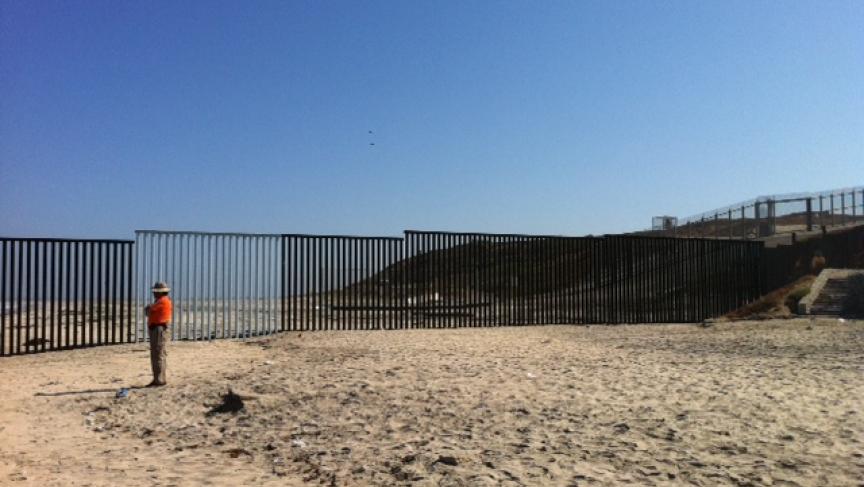 Story from PRI's The World. Listen to the above audio for the full report.

Mario Lopez pulls his bright orange Jeep over to the side of a major freeway in Tijuana. He points to the double fence separating his Mexican city from San Diego. This area used to be a major route for illegal border crossings. In the 1990s, more than 1,500 people were smuggled through here each week.

Lopez has been an agent with Grupo Beta for two decades. It’s a Mexican government agency with a mission to protect northbound migrants from smugglers. The agents had the authority to conduct investigations and make arrests.

Carlos Diaz de Leon walks up to Lopez and extends his hand, showing him a folded US deportation slip. The Sonora migrant has just been sent back to Mexico and he asks Lopez for help.

Diaz de Leon said he’s crossed illegally many times over the years, and Grupo Beta was always there for him.

“They have fed me when I was hungry,” Diaz de Leon said. “They’ve given me change when I needed to call home. I think they’re the only ones out there looking out for undocumented migrants.”

There used to be dozens of local smuggling operations here, charging migrants up to $2,000 a head. Beta agent Mario Lopez said with tightened border security, it’s more difficult to smuggle people across.

“Smuggling has decreased through this part of the border by almost 90 percent,” he said. “Now there’s more surveillance, there’s a second border wall, there are guards patrolling by horse, motorcycle, and cars. And there are cameras and sensors.”

Lopez sounds a little resentful of the stepped up security on the US side. But what he’s really concerned about is the unintended effect of the tighter border. It’s professionalized the smuggling business; violent gangs and drug cartels have moved in, and they now charge about $10,000 per person.

On a typical day, Lopez still patrols along the Mexico side of the border. But he no longer conducts investigations and he’s no longer armed. It’s too dangerous. Now he and his fellow agents focus on handing out food and providing first aid to migrants. Grupo Beta has become a force without much power or much of a mission.

It’s not just Grupo Beta that’s pulled back from investigating. Victor Clark Alfaro, director of the Binational Center for Human Rights in Tijuana, said that the violence and insecurity have pushed his group to curtail their work.

“It’s too risky to really research the smuggling business of today,” he said. “It was hard enough in the 1980s and 90s.”

In the past year alone, the bodies of more than 150 migrants were discovered in the state of Tamaulipas, 80 miles south of the Texas border. It was one of the worst mass killings in Mexico in the past decade, and it sparked new concerns about the vulnerability of migrants.

On the San Diego side of the border, 500 feet from the fence, three red-and-white pick-up trucks are parked, ready to deliver medical supplies, clothing, and food to migrants who need help after smugglers drop them off.

Rafael Hernandez heads the volunteer-run Desert Angels, a 14-year old civilian rescue group on the US side. Hernandez fields calls from family members of migrants lost in the desert. He said crossings here may have fallen to a 40-year low. But those who do make the attempt face greater peril.

“Along the way, they are mugged, kidnapped, raped,” he said. “But groups like ours, we can’t point it out. It’s very compromising to say that we know illegal activity is happening somewhere along the border.”

By compromising, he means dangerous. Hernandez said the consequences of speaking out about smuggling or the violence against migrants would be terrible.

The billions spent on border infrastructure and law enforcement over the past decade have dramatically changed the smuggling business. And in many ways, it’s become a much more dangerous game for everyone involved.

Ruxandra Guidi is a reporter at KPBS in San Diego.