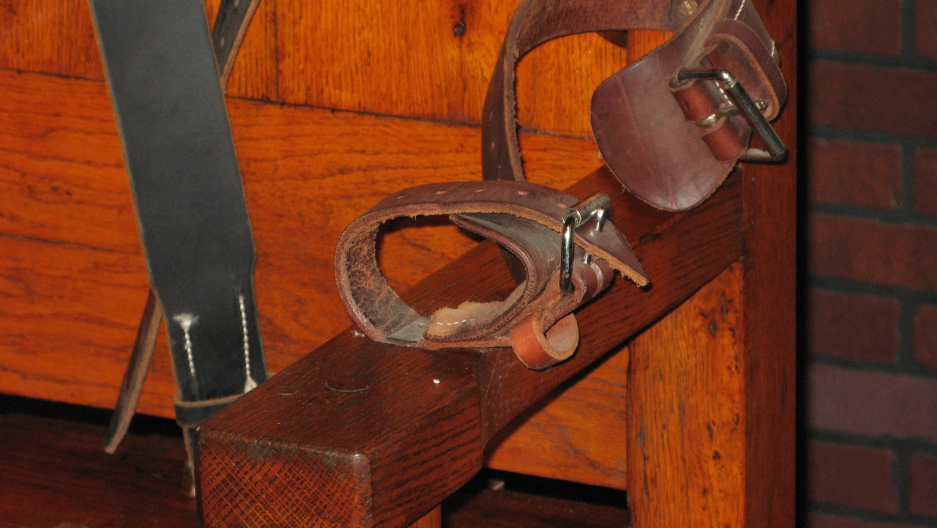 A leather arm strap of 'Old Sparky,' the decommissioned electric chair in which 361 prisoners were executed between 1924 and 1964, is pictured at the Texas Prison Museum in Huntsville, Texas, in Nov. 2007.
Credit: Fanny Carrier
Share

Fed up with the debate over whether Florida’s current execution method constitutes cruel and unusual punishment, Drake, a Republican from Eucheeanna, filed a bill this week to give death row prisoners the choice between death by firing squad or electrocution instead, the Miami Herald reports.

"We still have Old Sparky,” he said in a statement announcing his bill, MSNBC reports. “And if that doesn't suit the criminal, then we will provide them a .45 caliber lead cocktail instead.”

Drake’s bill was inspired by a controversy over the September execution of Manuel Valle, which used a new mixture of drugs, the Miami Herald reports.

According to the Miami Herald:

The drug, pentobarbital, knocks inmates unconscious before a second drug paralyzes them and a third stops the heart.

Several activists and medical professionals, including the drug’s maker, protested its use prior to Valle’s execution, arguing that it failed to adequately sedate inmates.

"I am sick and tired of this sensitivity movement for criminals,” Drake said in his statement. “Every time there is a warranted execution that is about to take place, some man or woman is standing on a corner holding a sign, yelling and screaming for humane treatment. I have no desire to humanely respect those that are inhumane."

With so many trained marksmen capable of carrying out firing squad executions properly, it’s the "most humane" and "most dignified" method of those that can be used in the United States, Deborah Denno, a professor at Fordham University law school, told MSNBC.

"I think people think of it as an antiquated procedure ... without realizing it's so much more humane than what we do to kill people," she said. "Ironically, they equate it with the Wild West ... (and) barbarity."