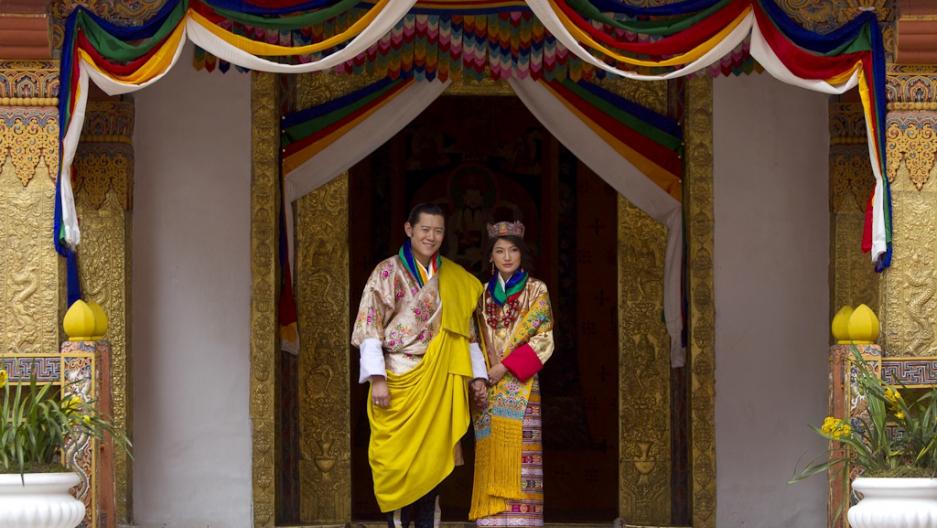 His majesty King Jigme Khesar Namgyel Wangchuck, 31, and the Queen Jetsun Pema, 21, walk out after their marriage ceremony is completed on Oct. 13, 2011 in Punakha, Bhutan.
Credit: Paula Bronstein
Share

PUNAKHA, Bhutan — A few months ago, local monks agreed on the most auspicious date and time of day for the 31-year-old King of Bhutan to marry his bride.

The monks concluded that in order for the king’s marriage to be as happy as possible, the wedding would have to take place on Oct. 13 and start at 4 a.m.

In this traditional Buddhist kingdom, astrological verdicts are never questioned, not even by King Jigme, often referred to as the “Modern King,” so the highly anticipated royal wedding kicked off at 4 a.m. today.

It was still pitch-dark outside when 100 monks initiated prayers and welcomed the king and then his royal bride.

Instead of exchanging rings, the king placed a brocade crown on his bride’s head, making her his queen.

More: Why Bhutan's 'Gross National Happiness' is a joke

With a giant Buddha behind him, the king placed a traditional Raven Crown on his own head and sat on the Golden Throne. The symbolic rituals continued on for 10 hours.

But as traditional as the three-day wedding celebrations appear to be, the fifth King of Bhutan made one thing clear to his nation: The royal bride, Jetsun Pema, 21, will be his only wife.

“I’m certain I’m married to the right person,” said Jigme, 31, shortly after the coronation ceremony. This was not a big surprise because Jigme has been declaring publicly for months that he was in love with his live-in girlfriend, an unusual behavior from a king.

“I have a feeling our fifth king will be very strong and will make big changes,” said Dasho Sangay Wangchug, council member of the Royal Privy Council, commenting on the King’s intention to be monogamous. “He loves her very much.”

This is a sharp departure from his father’s marital life. The previous king, His Majesty Jigme Singye Wangchuck, or The Fourth King of Bhutan, married four women in a mass wedding ceremony, allegedly because it had been prophesied to him he would marry four sisters, descendents of Shabdrung Ngawang Namgyal, a lama who unified Bhutan in the 17th century. And to go along with the prophecy, he went through with it and married four sisters.

His four wives, referred to collectively as the Queen Mothers, were at the wedding ceremony today.

Even though only one of them, the third youngest, is the birth mother of the current King, the King Father is said to treat all of them equally and with love, even though they always walk a few steps behind him.

Polygamy is technically legal in Bhutan, but it is becoming less common because it is expensive to support multiple wives equally.

Bhutan is also one of the few places on the planet that still practice polyandry — a form of marriage where one woman marries multiple men, typically brothers — although this practice has also become extremely rare.

As one of the most isolated and culturally rich countries in the world, Bhutan continues to struggle with finding just the right amount of “modernizing” that needs to be done, while staying true to their fairytale traditions. The cultural gap between the rural Bhutanese and the new “Playstation generation” of local youth has been growing rapidly.

The King, who was educated at Phillips Andover Academy in Massachusetts and later at Oxford University in Britain, is a big fan of Elvis Presley and basketball (especially the Philadelphia 76ers) is thus widely seen as the country’s ticket to the 21st century.

He has overseen the country’s transition to parliamentary democracy in 2008 and assisted with creating the country’s first constitution.

Nicknamed “Prince Charming”, the king is perceived as approachable, warm and funny and his decision to marry a commoner — one he has been “officially dating for a while” no less — is yet another sign of the kind of changes coming to the Land of the Thunder Dragon.

Her Majesty Queen Jetsun Pema Wangchuck shares her husband’s passion for arts and basketball. Like him, she has studied abroad and is not just a pretty face.

The story goes that the two met when he was 17 and she was 7. She came up to him and hugged him and told him that she wanted to marry him when she grew up. The prince smiled and said that if he was still single by the time she grew up, he would marry her.

And today, that story came true.