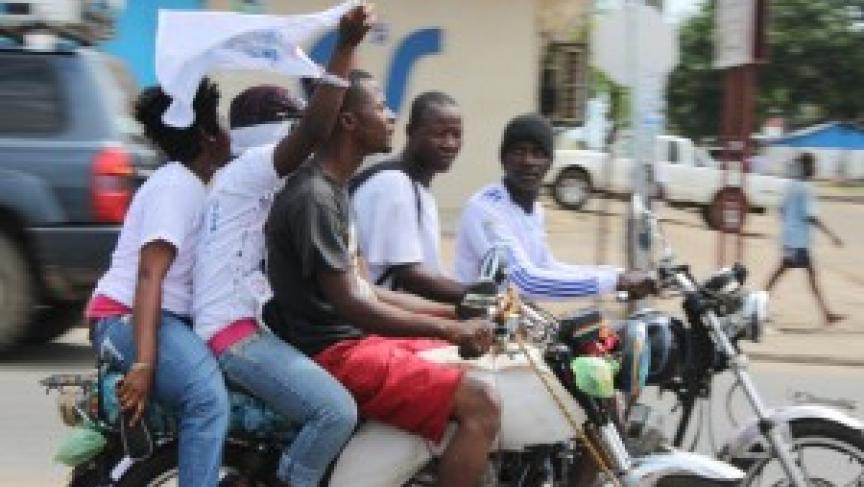 Photo of Liberians. More than half of registered voters in Liberia are under the age of 32. (Photo by Bonnie Allen)

Liberians go to the polls on Tuesday to choose a president, less than a week after the incumbent Ellen Johnson Sirleaf was named a Nobel Peace Prize winner. It's a pretty heady campaign endorsement, and it's angered the other candidates in the race. But the Nobel is no guarantee that Sirleaf will win re-election.

Sao Marwlo drives a motorcycle taxi in the capital Monrovia seven days a week. He's 19, and he can't afford school fees to finish high school. He only earns about $60 a month. He said he won't be voting for Sirleaf.

"The Old Ma, she really fooled us," Marwlo said, using Sirleaf's nickname, Ma Ellen. "She promised us a lot of things, and she never did it."

He said Sirleaf promised free education for all and well-paying jobs, but she didn't deliver. He's most angry that Liberia's police force remains largely corrupt. He said police can arrest people like him for no real reason, just to extort money.

Liberian youth like Marwlo could be a deciding factor in the presidential election. More than half of Liberia's registered voters are under the age of 32.

Massive rallies in the final days of campaigning suggest that a large number of fanatical youth have embraced Sirleaf's main rival, Winston Tubman. He and his running mate, soccer star George Weah, have promised a better future for young people.

Their platform isn't much different from Sirleaf's, but Weah's presence on the ticket is a huge draw for young men. They've latched onto the 'vote for change' mantra.

"I'm voting for George Weah," said one young man in Monrovia. "George Weah is the person who can make a better change."

Weah is hailed as a native Liberian, far removed from the elite politicians who have historically ruled Liberia. He grew up in a slum and achieved fame and fortune as a professional athlete.

That impresses many young men more than Sirleaf's Nobel. They say Weah will find them good jobs.

Still, for many it's an unrealistic expectation. In a slum known as Sugar Hill, some ex-combatants sit down to talk to me, their eyes glazed over from smoking marijuana.

Mohamed Kuma, 22, is a former child soldier. He first held a gun when he was 12. A decade later, he steals cellphones to survive.

"I don't got a job to do," Kuma said, "so at the end of the day, I will still come on the street to steal. I will always steal from people."

The International Crisis Group suggests that ex-combatants, like Kuma, pose the greatest risk to Liberia's fragile peace this election. In the past week, many Liberians have withdrawn their money from the bank and stocked up on rice just in case violence breaks out. Steven Forkpa, a Monrovia store owner, said people are nervous.

"It put fear in people, so that's why they're buying more rice than ever before," he said.

In advance of the vote, all border crossings have been closed. Thousands of United Nations peacekeepers are stationed in Liberia, and air patrols have already begun.

It's considered unlikely that Sirleaf or any candidate will achieve an outright victory on the first ballot. Tensions could continue to simmer if, as expected, the vote goes to a run-off in early November.