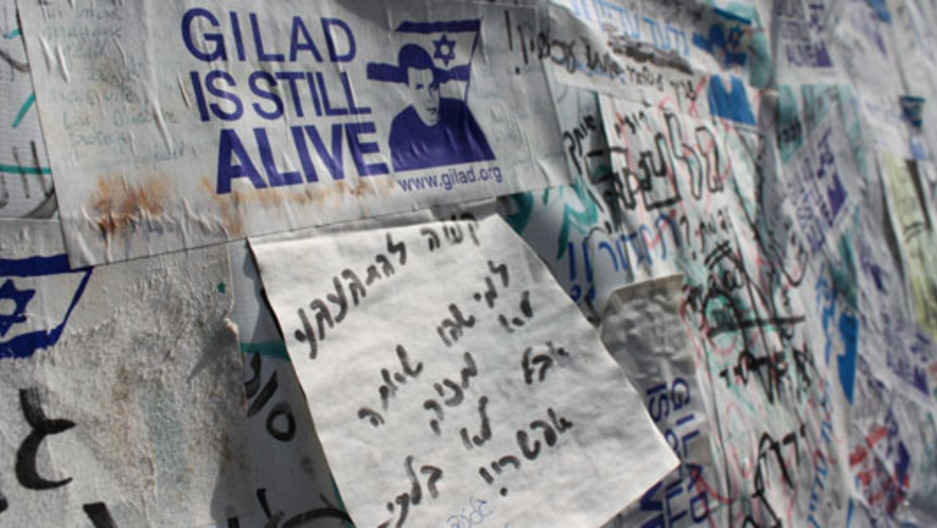 Share
The mood was jubilant in Israel on Wednesday after cabinet ministers agreed to a prisoner exchange deal with the Islamic militant group Hamas that controls Gaza. Israel agreed to release about 1,000 Palestinian prisoners in exchange for one Israeli soldier — Sergeant Gilad Shalit, who was kidnapped by Hamas five years ago. Daniel Estrin reports from Jerusalem. Israelis have been waiting for this moment for the past five years, but no one expected it to come Tuesday night. Not even the senior news anchors of Israel's two main TV networks. One was on vacation. The other was getting married. But suddenly, Israel's cabinet ministers were hurrying to the Prime Minister's office to approve the exchange. Even before the vote, Israeli Prime Minister Benjamin Netanyahu was confident it would pass. He spoke in a nationally televised address. "Gilad will return to Israel in the coming days, to the bosom of his family and his nation," Netanyahu said. Israelis have been celebrating in front of a tent next to the Netanyahu residence. The parents of the captured Israeli soldier pitched the tent last year to press the Prime Minister to strike a deal to release their son. Ohad Kaner isn't related to the Shalit family. He is just a regular Israeli who dropped everything, left his home, and sat with the soldier's parents in this tent every day for the past year. Now, he and the Shalit family are packing up their things. "The next step is to destroy this tent," Kaner said. "Everyone has to go back home and start his life." Dina Fogel has been a regular visitor at the tent, spending time with Shalit's mother. She said she saw a smile on Shalit's mother's face for the first time in five years. "I was here many times. I never saw her smiling," Fogel said. "It's a great day. I am so happy. It's terrific, it's wonderful." Nadiv Deutch, a soldier himself, took leave for the weekend. He heard the news Tuesday night during a military exercise in the West Bank. As an Israeli, Deutch is elated. As a soldier, He fears it will be more dangerous. "It's a good feeling to know that the government takes care of you. The army doesn't forget its soldiers and returns them home," he said. "Hamas and terror groups know this is what we fall for. They will try to do it again. They will try to do it again." Deutch means that Hamas could capture another Israeli solider to exchange for more prisoners. So he said he is going to be a lot more careful. No more hitchhiking from the base back home, and he'll make sure he is always armed when he leaves the base. "Before I wasn't so worried about these things," Deutch said. "But now I know this is what they are looking for. They are after soldiers and it's dangerous." In Gaza there were celebrations too. Hamas Prime Minister Ismail Haniyeh threw candies to a crowd of cheering supporters. He promised this won't be the last prisoner exchange between Hamas and Israel. Israelis largely support the deal to free Gilad Shalit, though some say it could have been done years ago. Still, there is some strong opposition among Israelis whose relatives died in Palestinian bombings and attacks. Some of them took to the streets Tuesday night, holding photos of their dead loved ones. They said some of the Palestinian prisoners have blood on their hands, and they'll carry out more attacks once they're freed – attacks like the one that happened in a café, right across the street from the Shalit family's tent, where 11 Israelis were killed and dozens injured in a 2002 suicide bombing. Chavi Gliksberg, a local resident, said she hopes the days of terror attacks in Jerusalem are over, even after Israel frees the prisoners. "The fact that I'm sitting here is a celebration of life in Jerusalem," she said. "There were years I was scared of driving behind bus, in case it blows up." The Israeli Supreme Court is now accepting petitions from those who oppose the prisoner swap, but the court is expected to allow the deal to go through. Five years after he was captured, Sergeant Gilad Shalit could be home with his family sometime next week.