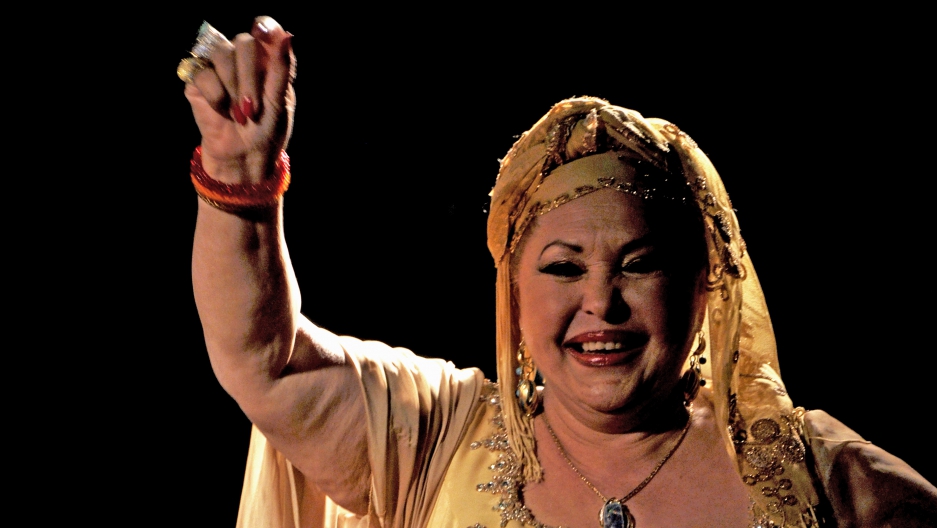 People everywhere are moved by the power of Esma Redzepova's voice.

But now the "queen of gypsy music" has taken on power of another kind. She was elected to the city council of her hometown Skopje, Macedonia, in 2005. She is currently serving her second four-year term.

"I'm most active on the council in matters concerning physical improvements to the city, for it to be cleaner and more beautiful," Redzepova said. "I support the construction of public monuments."

She was beloved and mourned around the world. Read more here.

A member of the governing nationalist political party, Redzepova says she is mainly involved in the city's cultural affairs. She has a long history of working for humanitarian causes, helping orphans, women and Roma war refugees among others.

She has sung more than 2,000 charitable concerts. She says working on the city council is an opportunity to serve the public in much the same way.

"I said as a city counselor that we should not have such high salaries and that we should lower them," she said. "I stood up and said that it is a very beautiful thing that we are able to work for the citizens and make their lives better, for young people and old people, and for pensioners and children. The city has opened playgrounds and many sports centers."

Her political career hasn't really affected her music she says. But her music and some 15,000 performances around the world, she says, have given her a global perspective, which she brings to the council. She also wants to serve her country. Ethnic Roma minorities face severe discrimination in most countries, and Redzepova says Macedonia is one of the few places were they are not forced to assimilate.

"I think everyone should consider Macedonia as a model for how countries deal with their Roma populations," she said. "When I travel abroad to perform, people say, 'Oh, you are very lucky, you are born in Macedonia where Roma have a lot of rights.' They are not mistreated. A Roma can go anywhere, without any limits. no one will ever say to you, 'Hey, you gypsy, what are you doing here?' People here live in the most normal way."

Redzepova's smile radiates much like her voice. She wears big gold earrings and each finger and toe nail is painted in a different bright color. A star since childhood, Esma was a favorite of the socialist-era dictator Marshal Tito. She represented Yugoslavia at official high-profile state events around the world.

"I have been composing since I was 9 years old, when I made 'Chaje Shukarije,' the most famous Romani song in the world," Redzepova said. "There is no wedding or joyful occasion anywhere in the Balkans where they do not sing it. Many musicians from all over the world want to record cover versions."

"I haven't changed my style," she said. "I've used the same ornaments since I was little, and continue to do so now. The only difference is that now my voice is more mature, my voice is more beautiful. Because I'm getting older, I know better what to do with my voice."

Despite the collapse of her beloved Yugoslavia and the coming of the free market to the Balkan music business, Esma has stuck with her trademark sound. She said she hopes the Balkans becomes better known for the beauty of its music than for the bitterness of its wars.