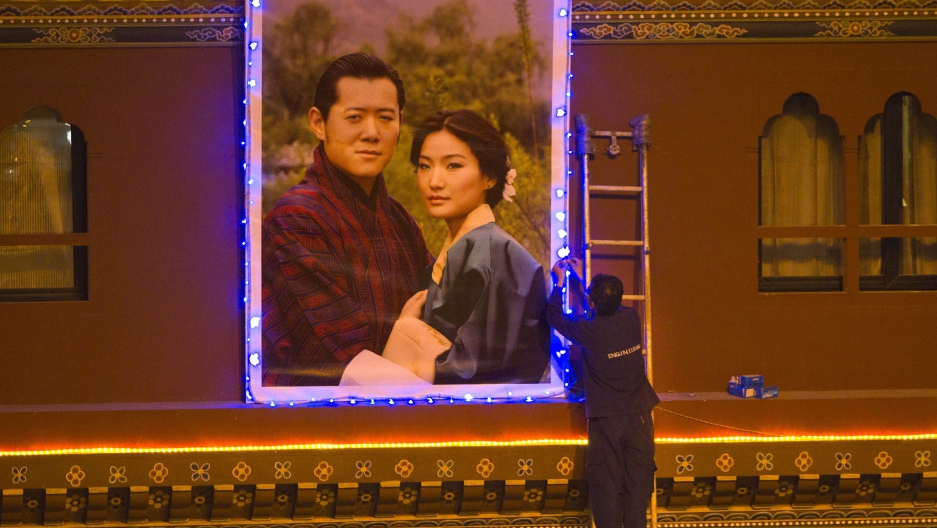 A Bhutanese worker hangs lights on the portrait of the future King Jigme Khesar Namgyel Wangchuck, and Queen of Bhutan as Bhutan prepares for the royal wedding October 11, 2011, in Thimphu, Bhutan.
Credit: Paula Bronstein
Share

Bhutan, a tiny kingdom in the Himalayas, is reportedly in full preparation mode for the marriage of its beloved king, Jigme Khesar Namgyal Wangchuck later this week.

The 31-year-old reformist monarch will wed his commoner bride, Jetsun Pema, 21, in a traditional Bhutanese ceremony in the ancient capital of Ponakha, the Associated Press reports.

Pema (soon to be known as Ashi Jetsun Pema Wangchuck) was reputedly educated in London and her interests, according to the palace at the time the bachelor king's marriage was announced in May, include fine art and basketball.

Bhutan, a tiny nation home to fewer than 700,000 people, is famed for its "Gross National Happiness" index, which it prizes over the traditional GDP measure of wealth. According to the AFP, the country had no roads or currency until the 1960s and first allowed television only in the late 1990s.

The Oxford-educated king is adored by his subjects, having adopted a staunch anti-globalization stance, vowing to protect Bhutan's culture from the corrupting influences seeping in from the outside world.

Many of his subjects hope for the quick arrival of a new heir, the AP reports.

The wedding will reportedly take place in the historical Punakha Dzong, the same venue that hosted the King's historical coronation ceremony in 2008.