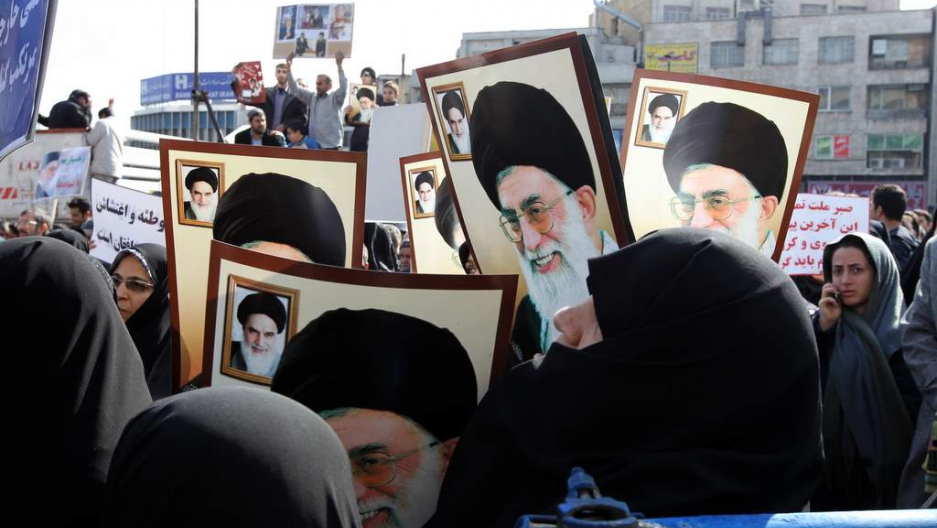 Tens of thousands of Iran regime loyalists, many carrying posters of supreme leader Ayatollah Ali Khamenei, pour on to the streets of Tehran on February 18, 2011, demanding that opposition leaders Mir Hossein Mousavi and Mehdi Karroubi be hanged for their 'rebellion.'
Credit: ATTA KENARE/AFP
Share

Khamenei made the comments at a rally in the city of Kermanshah, and his speech was broadcast live on state TV.

"They [U.S. government] may crack down on this movement but cannot uproot it," Khamenei said, according to the AP. "Ultimately, it will grow so that it will bring down the capitalist system and the West."

The New York Times reports that Khamenei praised the protests, and called them a consequence of “the prevalence of top-level corruption, poverty and social inequality in America.” Khamenei also criticized “the heavy-handed treatment of the demonstrators by U.S. officials," saying that such treatment “is not seen even in underdeveloped countries with dictatorial regimes."

On Tuesday, U.S. officials announced that they had charged two men, including a member of Iran’s Qods Force, in a plot to murder the Saudi Ambassador to the United States. On Wednesday, Vice President Joe Biden called the plot “an outrageous act” and vowed that “Iranians are going to be held accountable," according to Politico.

According to the Times, Iran's semi-official Fars news agency ran a story Wednesday with the headline “U.S. Accusations Against Iran Aim to Divert World Attention from Wall Street Uprising.” The story quoted a member of Iran’s Parliament, Alaoddin Boroujerdi, saying he had “no doubt this is a new American-Zionist plot to divert the public opinion from the crisis Obama is grappling with.”

The BBC reports that Iranian officials have been calling the Occupy Wall Street protests the "American Spring," comparing them to the "Arab Spring" uprising in the Middle East. It's a comparison the demonstrators themselves have made.

"Occupy Wall Street is leaderless resistance movement with people of many colors, genders and political persuasions," the OccupyWallSt.org website read. "We are using the revolutionary Arab Spring tactic to achieve our ends and encourage the use of nonviolence to maximize the safety of all participants."