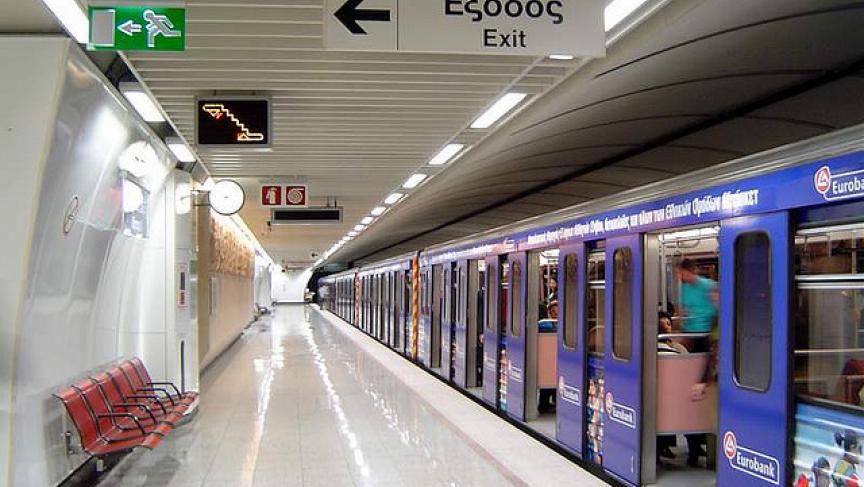 An Athens subway train waits for riders in this file photo. On Monday, a strike stopped all public transit in Athens. (photo by Flickr user cavorite — cc-by-sa)

Another day, another public sector strike in Athens.

That's because commuters were left without a single bus, tram or subway in the capital Monday. Traffic is usually bad, but Monday morning it was especially bad.

And that left Katia commuting on foot. She is a civil servant who only wanted to give her first name.

What normally takes 10 minutes by subway took her an hour to walk.

“I’m sympathetic to their demands,” Katia said. “But they all strike at the same time, and it’s difficult for me.”

Her own salary, she said, is due to be slashed in half.Katia said she has three kids living in a town more than 300 miles from Athens.

Not far from a corner cafe, I meet Efi Koutsonikoli.

“With the new measures, I can’t afford to pay my rent, or my bills,” she said. “I have expenses, and with the salary cut, we are not able to live. It’s not achieving anything.”

She works for a private company that does foreign language training.

Koutsonikoli said her family has also seen its household income cut in half this year. Her daughter’s school can’t afford books, but she and her husband can still afford to put gas in their car – he gave her a lift to work this morning.

“For thirty years, our political leaders have been telling us a fairy tale,” Koutsonikoli said. “Most Greeks have burdened themselves with loans and credit card debt. And they can’t pay."

“We were living on borrowed money not realizing that probably for a period of time, we had a standard of living we didn’t deserve,” said Costas Bakouris, Chairman of Transparency International in Greece.

He said he doesn’t endorse the public sector strikes.

“Every sector they try to say don’t touch me, touch all the others,” he said. “From that point of view, I sympathize, but I don’t agree with the way they do it. We all have to understand now – we all have to make sacrifices.”

Some would like to see the sacrifices made in a different way.

The Greek government has chosen across the board wage cuts.

But former Greek finance minister Stefanos Manos said there are plenty of dead-weight public workers who should just get the axe.

“Someone has to pay for these people, that’s what people tend to forget,” she said. “So, in fact, the policy which would make sense would be to reduce the numbers, and possibly even increase wages for those who merit an increase in wages.”

One Athenian looked at the pouring rain and joked “and they say Greece has a liquidity problem.”

But Dimitri, who would only give his first name, wasn’t laughing.

He said with his salary cut in half, he would have no problem leaving Greece completely.

“Yeah, I wouldn’t mind. Things are very bad, and they will get worse,” he said. “All these measures? I don’t think they will get us anywhere.”

Dmitri said the government will just keep taking more and more, but it won’t help Greece.