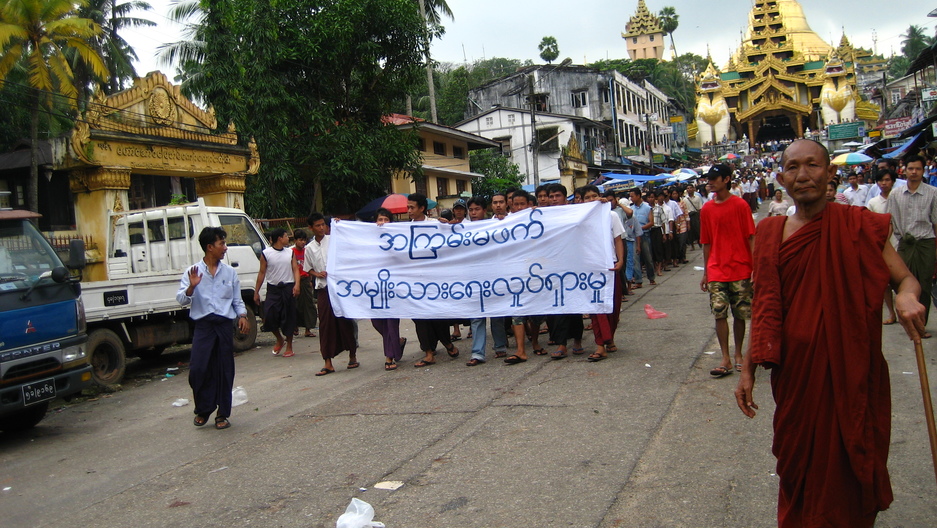 Monks protest in Myanmar in this photo from 2007. (Photo form Wikimedia Commons by Flickr user racoles)

The Southeast Asian nation of Myanmar is one of the most repressive countries in the world. But lately the military government has been angling for international acceptance. It’s signaled some increased tolerance for criticism. Just last week, it bowed to public protests and scrapped plans for a controversial dam.

But the country also known as Burma has a poor human rights record. Some 2,000 political dissidents remain in prison, and the United States, Europe and Australia have made their release a key condition of lifting economic sanctions.

On Tuesday, the Burmese government announced a mass amnesty, though it didn’t explicitly mention political prisoners. And many Burmese dissidents question the government’s commitment to reform.

In a safe house along the Thai-Burmese border, a man who calls himself Bo Bo looks at photos of a dozen men pasted on a wall. Like him, they’re members of a group of activist musicians called Generation Wave. Unlike him, they’re all in prison. He points at one photo; it’s of a friend now serving a 13-year sentence for illegal organizing.

“We started together doing politics,” he said. “We did actions together, and when he was arrested, I had to run.”

That was three years ago. Bo Bo had been handing out CDs and spray-painting anti-government graffiti in the capital, Yangon. One day police paid a visit to his house, so Bo Bo fled to this border town.

It was the anti-government protests in 2007, led by Buddhist monks, that politicized Bo Bo and other members of Generation Wave. Bo Bo said it was the first time he had ever seen a political demonstration, let alone marched in one.

“I feel something like, I would like to express out my feeling,” he said. “So I walk with them.”

But then the government launched violent crackdowns. Dozens were killed; hundreds more were beaten, and the number of the country’s political prisoners nearly doubled.

In September, the Burmese foreign minister Wunna Maung Lwin addressed the U.N. General Assembly. He urged the international community to drop sanctions against his country, and he hinted his government would soon grant an amnesty for an unspecified number of political prisoners.

Today, state media in Burma announced the government would release about 6,300 prisoners. It’s not clear how many will be political detainees but the announcement came shortly after a government-appointed human rights panel said prisoners of conscience should be freed.

Many human rights advocates say this is an encouraging sign. But Bo Kyi remains skeptical. He was a student protestor in 1988, part of the 88 Generation student movement. He spent eight years in prison, some of them in solitary confinement.

“That was hell,” Bo Kyi said. “At the time I thought I could not survive. I would be beaten to death.”

Bo Kyi, who now heads the Assistance Association for Political Prisoners, said Myanmar is merely doing the minimum to curry favor with the international community. The Burmese military government would like to chair the Association of Southeast Asian Nations in 2014. But according to Bo Kyi, releasing a handful of prisoners is not meaningful change.

“That is a showcase to convince the international community,” he said. “That’s all.”

Political rapper Zayar Thaw is one example. The hip hop musician co-founded Generation Wave after the 2007 protests. He was jailed a few months later.

This past May, he was among several dozen political prisoners who were released when the government shaved one year off their sentences.

In an email, he questioned how Burma can be seen as making significant reforms.

“The government is still arresting political activists,” he wrote in the email. “They sentence them to 65 years in prison, then they reduce it by one year. Is this an improvement?”

For now, though, he’s still waiting for real change.