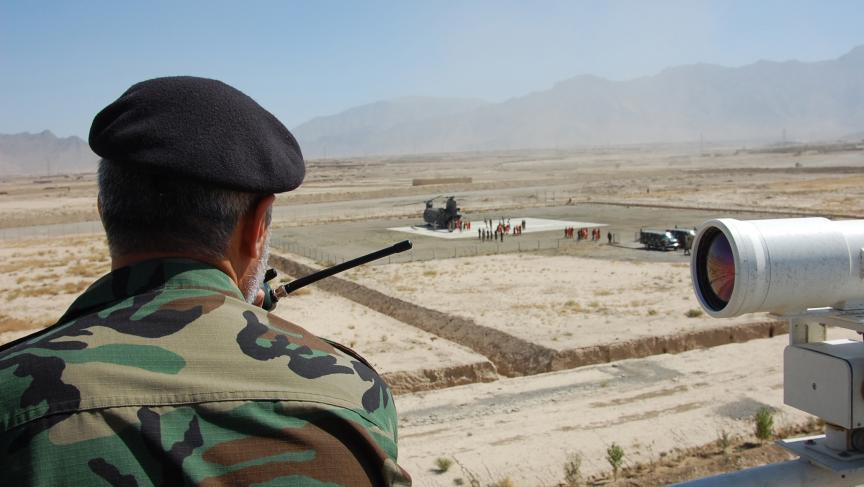 Photo from an Afghanistan prison (Image by the US Department of Defense.)

Story by Laura Lynch from PRI's The World. Listen to audio above for full report.

There was no fanfare at the White House Friday to mark the 10th anniversary of the war in Afghanistan.

One line in that statement said that in Afghanistan the United States has shown itself to be a "partner with those who seek justice, dignity and opportunity."

And one focus of that partnership is Afghanistan's shattered justice system.

Restoring people's faith in the rule of law is seen as key to diminishing Afghan support for the Taliban.

So millions of dollars have been spent on training lawyers and judges, and on building courthouses.

But many Afghans still shun the courts in favor of traditional methods that critics say do an injustice to girls and women.

I am being taken to a secret shelter in the capital. A shelter for girls and women who fear for their lives.

Inside this refuge, they learn how to make clothes and crafts, how to read and write and how to survive. They also try to forget the past.

One teenager has been here just a few months. She is pale, and her clothes hang loose on her thin frame. She speaks quietly as she recounts a terrible tale.

"My uncle ran off with a woman," the girl said. So eight girls and I – sisters and cousins – were given as compensation to the other family. My cousin and I were the youngest. She was 3 and I was 5 years old. We had a really hard life, they beat us, and stopped us from leaving the house. I tried to kill myself several times, taking pills and drinking acid."

Eventually, she said, she decided to escape and she did it in dramatic fashion.

"I wore men's clothes and changed my hair. I decided to live like a boy on the streets and in the mosque," she said. "Then one day, a woman found out who I really was and took me to the ministry of women affairs.

A ministry official brought her to the safety of the shelter.

The case highlights one of Afghanistan's most ancient rituals for settling disputes. And while it violates Afghan law, it is still happening today. It's called baad.

Nader Nadery is with the Afghanistan Independent Human Rights Commission. He said that local jirgas, or councils sometimes settle disputes by simply giving girls and women away as payment for some wrongdoing. While Nadery doesn't like it, he understands why it's still happening.

"In absence of functioning formal justice system, especially in the last 20-25 years," Nadery said, "people had to find another way of settling their disputes and finding remedies and that was those traditional mechanisms of elders or different figures sitting together and making and issuing a resolution and settling some disputes most often settled by giving another victim."

In the hallway outside the family court in Kabul, it is a chaotic scene. This is one example of the efforts of the government and its allies to rebuild and reform the justice system. It is a system that was undermined and politicized by the Soviets and the mujahadeen, then torn apart by the Taliban.

At the registry, men and women dump documents onto the desks of harried clerks, waiting for a chance to go before a judge. One couple is led into Chief Justice Rahima Rasai's courtroom. It looks more like a living room with its comfortable sofas and chairs.

The husband opens the hearing by reading a statement claiming that the marriage was happy until his wife started to behave strangely. Then is the wife's turn. She becomes more agitated as she speaks, suddenly removing her headscarf and pulling her hair back, trying to prove that her husband beat her.

"See my head, can you see my injuries?" she asked.

"Be quiet, be quiet," Justice Rasai commanded. "Next time, bring a document from the hospital where you went for treatment to prove your injuries."

As the two started to bicker, Justice Rasai grew impatient. With no gavel, she banged her desk with her hand to try to bring some order to the court. They both sate quietly as she lectured them.

"As I've said plenty of times to both of you," Justice Rasai thundered, "I really don't care as much about you, I am really worried about your children and their future"

They are told to come back in 15 days with witnesses and documents.

After the session ends, Rasai admits many of the cases that come before her are not settled by her at all. She steers disputes toward so-called jirgas, but she keeps the court involved, insisting the jirgas keep a record and report back to the judge.

It is a hybrid model that she said ensures at least some court influence in a country where many simply do not want to use the official justice system. The reasons range from corruption to inefficiency to shame at making their problems public.

There are only six family courts in all of Afghanistan's 34 provinces. This one serves a population of nearly five million people. Yet Rasai confirms there are only 350 cases filed in her courts each year.

Nader Nadery of the human rights commission said after a decade, Afghanistan is less than a third of the way to establishing a strong, independent effective system. He said the blame for that is shared by all those who seized power from the Taliban a decade ago.

"It was one of the biggest failures of both the Afghan government and its international partners to not recognize the importance of good governance, rule of law and justice," Nadery said. "It could be a much more effective tool to deal with the insurgency also and build support among the population."

It was never going to be easy to overhaul the justice system in a country so broken by war.

Even the formal court process has been stubbornly resistant to change in a country where harmful traditions are so deeply entrenched and that has led to arrests and convictions that Americans would find astonishing.

Behind a locked gate and the high, secure fences sits Kabul's only prison for women. The setting is almost pastoral, sitting near an orchard of almond trees.

This isn't just a women's prison though. Their children stay here with them, as they inmates serve their sentences. Many of the 120 or so women here have been jailed for drug-related offences and violent crimes, but here, real criminals live side by side with those who are in reality victims of justice.

They have been found guilty of offences not even recognized in law; in essence the offence of bad character. Twenty- year old Sohaila twists her black and silver headscarf around her fingers as she recalls how she ended up in jail.

She said she was five years old when her when her brother ran off with another man's daughter. Sohaila said the man, a local warlord, came seeking revenge.

"My father was really scared of him. When he attacked our house, my father and I were both injured," Sohaila said. "Three bullets hit my father's hand and he's disabled now. I was injured too and they burned down our house all because my brother ran off with the man's daughter."

Sohaila said her father settled the dispute by giving her away as compensation in a "baad." As she grew older, she feared being forced to marry a man who was already a grandfather with two other wives. So at sixteen, she ran away with her cousin, married him and tried to disappear in Kabul. Two years ago, her father found her and turned her in to the police.

"My father claimed my husband kidnapped me," Sohaila said. "During the court hearing he denied that he had given me away to the old man in a 'baad.' The judge put me in jail for two years and my husband for ten years."

Sohaila's baby son nestles in her arms as she recounts a chilling conversation she recently had with her father.

"I am having a really hard time here now. I have a son by my husband but my father said if I want to come home again, I have to kill my son first. "

Even the warden, Aneesa Descadezodah, tells me she does not want women like Sohaila serving time.

A paper published by NATO last year suggests would take at least two decades to reform the court system, and instill respect for the rule of law.

"It's not yet late but we have missed very very good opportunities in the last ten years and still I do not see a political will in both the Afghan government and the international community to engage seriously in one of the failures of the early time of the engagement," Nadery said.

In the meantime, the country's most vulnerable citizens are punished for crimes that don't exist on the books, while druglords, insurgents and those tainted by corruption remain free.

For Afghans who have already had to wait too long for justice, it's not easy to have faith in the future.