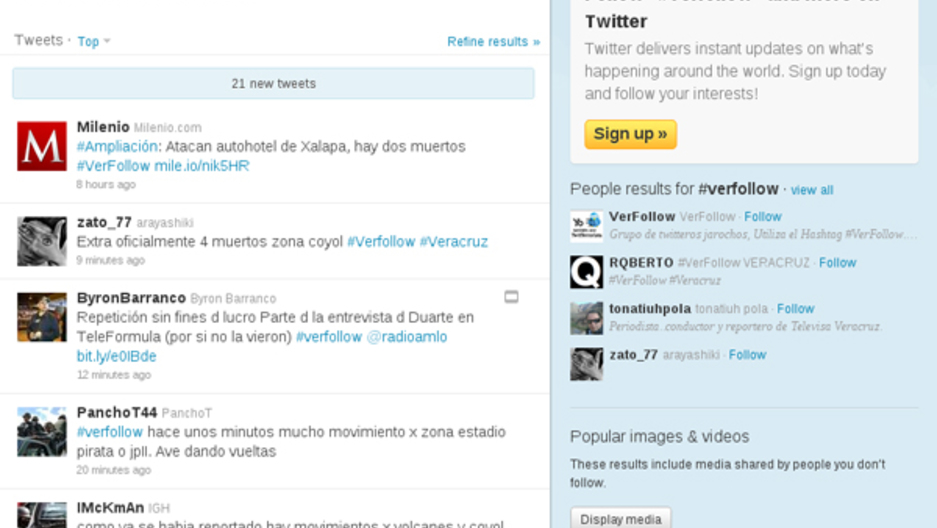 Share
Social networks like Twitter, Facebook, and YouTube have millions of users worldwide. Some people use them to keep up with friends and family, explore new interest, or simply have a good laugh at a funny video. But in violent parts of Mexico, these outlets have also become valuable channels for an emerging network of citizen journalists and concerned citizens. Shannon Young has more. Many city dwellers have the habit of checking the traffic report before getting in their cars to go somewhere. In northeastern Mexico, some people check their local Twitter hashtags to avoid shootouts. A shootout in the border city of Matamoros was one of the multiple attacks in four cities on September 27, 2011 in the state of Tamaulipas. Local media made no mention of the violence. Journalists in some areas are often under severe pressure from the drug cartels not to report the violence. Some government officials also prefer that the media stay silent so as to avoid bad publicity. The recent gunfights and grenade attacks in Tamaulipas were, however, documented in real time on Twitter using city-specific hash tags. A Tamaulipas resident who asked to be identied only with his Twitter handle, @MrCruzStar, said the purpose behind these real time reports is to minimize panic by providing information to residents about which parts of the city to avoid. He said timely alerts also allow people to notify relatives who may be on the streets to get out of harm's way. It is the kind of information Tamaulipas residents don't have access to via traditional outlets. Media in the northeastern border state is likely the most censored in all of Mexico. When the split between the Gulf Cartel and its former enforcement wing, Los Zetas, erupted in all-out street battles between rival bands in early 2010, authorities in Tamaulipas dismissed reports on social media sites as "panic" and "collective psychosis". @MrCruzStar said when the government began to deny the situation on-the-ground, people started posting video, photo and audio evidence online. That, he said, is when the local government began to acknowledge acts of violence. A similar situation exists in other parts of Mexico like the Gulf Coast state of Veracruz. Gilberto Martinez Vera opened a Twitter account in May in order to keep up with security risk reports using the "verfollow" hash tag, which covers the port city of Veracruz. He said he recalls signing in once on his phone after he came out of a movie theater with this family and hailed a taxi. When he saw news of a shooting — as his taxi driver headed for the area — he asked the driver to change course. Martinez Vera and another social media user, Maria Bravo Pagola, were arrested in late August, for spreading unconfirmed information online about an attack on local schools. Both were charged with terrorism and sabotage. "When they took me before the judge and I saw the paper, it really scared me," Vera said. "I thought 'My God; thirty years for 140 letters! It's not possible'. It was just too severe, excessive and unfair." Veracruz authorities say the information they put on Twitter, which turned out to be a rumor — reportedly caused more than 20 car crashes as parents rushed to pick up their kids from schools. Both of the so-called "Twitter terrorists" say they were only repeating information that had already circulated by phone and in the streets. As the pair sat in jail, Veracruz lawmakers modified the state's penal code to make spreading unverified information via social media a criminal offense. During the floor debate, state representative Karime Aguilera spoke in favor of the bill saying penalties are needed to punish those who damage society by causing alarm, panic, and the unnecessary movement of people and resources. False information spread online deemed to have caused a disturbance of the peace and provoked damage is now punishable in Veracruz with up to 4 years in jail and a fine equal to more than $4,000. The two Twitter users were released the same day state lawmakers passed the so-called "Anti-Rumor" law. At least two other Mexican states are reportedly considering similar legislation. While he no longer faces terrorism charges, Gilberto Martinez Vera says the new law is a restriction on free expression. "I recognize that it's wrong for someone to act with the intent to cause harm, but that's not what we did at all," Vera said. "The #VerFollow hash tag wouldn't even be necessary if the government would give information or alerts about which areas to avoid due to security issues. There are ways for them to let people know." Hours after legislators passed the "anti-rumor" law, gunmen dumped 35 bodies of murder victims near an underpass in a commercial district of Veracruz during rush hour traffic. The news, along with photographic evidence, was first reported on Twitter by local residents using the #Verfollow hashtag. While criminal violence, media silence, and possible legal penalities can make social media users Iin Mexico feel trapped in a catch-22, the situation does have an unexpected benefit. Tamaulipas blogger and Twitter user Mr. Cruz Star says the group experience of people looking after each other's safety has created a sense of civic awareness and community. It's a sense he hopes will one day be reflected not just online, but in real life as well.