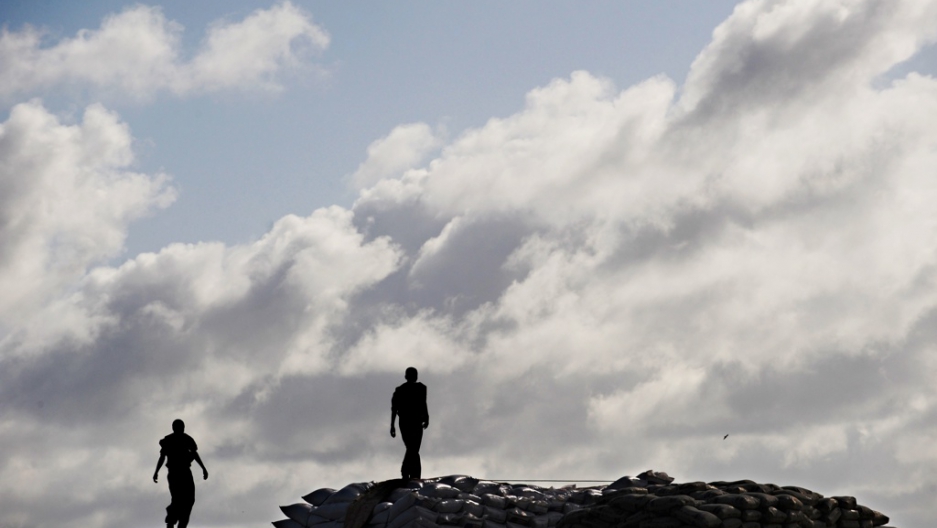 Somali men walk on sacks of food aid in Mogadishu on May 26, 2009.
Credit: Roberto Shmidt
Share

MOGADISHU, Somalia — A popular pastime among journalists visiting Mogadishu is to stare up into the inky, star-pricked sky at night to try to spot the surveillance drones that buzz overhead. Usually, they are pretty hard to see.

That is, until August, when the drones began to rain down from above — literally.

Eyewitnesses in the capital described at least one and maybe two observation drones crashing into the city in mid-August. The debris was swept up and whisked away by soldiers from the African Union Mission in Somalia (AMISOM), and no official comment was ever made.

It is unclear who was operating the aircraft. But four small, hand-launched Raven drones were part of a recent $45 million package of U.S. military equipment earmarked for AMISOM, a delivery that also included body armor and night-vision equipment.

Larger observation drones launched from the U.S. base at Camp Lemonier in Djibouti have been flying sorties over Somalia for years and, for a while, unarmed long-range Reaper surveillance drones were launched from the Seychelles to keep an eye on Somali pirates.

Then, this summer, the armed drones arrived.

Somalia, the most troubled country in the horn of Africa, has now become the sixth and newest theater in U.S. President Barack Obama’s expanding drone war, which will be serviced by new U.S. bases in Ethiopia, which neighbors Somalia, and in the Seychelles. Leaked diplomatic cables and anonymous officials speaking to the Washington Post suggest the bases will be used to target Al Qaeda affiliates in both Yemen and Somalia.

The first attack came on June 23, when a series of drone strikes, in quick succession, hit close to Kismayo in the far south of Somalia. The port city is a stronghold of Al Shabaab, the Al Qaeda-linked insurgent group that is based in Somalia.

News agencies and Somali radio reported missiles striking a convoy of Shabaab fighters, a training camp a few miles south of Kismayo, and another target close to the airport. Local residents said that helicopters landed shortly afterward, to take away the bodies.

Details are sketchy and hard to verify but a U.S. military official confirmed in the Washington Post that at least one drone struck the area, adding that two unnamed Shabaab leaders had been targeted.

The target may have been Ibrahim al-Afghani, a senior Shabaab commander and head of the group’s finances. He has not been heard from since the June strikes, and intelligence sources suspect he may have been wounded or even killed. Afghani’s death, however, reported on local radio, has not been confirmed.

In September, local residents reported several more strikes, again targeting areas close to Kismayo. They said the attacks hit a Shabaab training camp. A Shabaab fighter, meanwhile, claimed to have shot down one of the U.S. drones. As ever, there has been neither confirmation nor denial from the United States.

The attacks are the latest in a series of setbacks al Shabaab has endured in recent months. Infighting and military losses have undermined the organization’s effectiveness, as has Somalia’s ongoing famine, which some Somalis at least partly blame on the militant group. Its reputation took a major hit locally when it refused international aid agencies access to some famine-stricken regions.

But the terrorist organization remains a threat. Most recently, it claimed responsibility for a massive truck bomb that exploded on Oct. 4 in Mogadishu, killing at least 65 people.

Related: China's got drones too

The Somali government has limited abilities to battle the militants on its own. It has been quick to welcome U.S. drones as the newest weapon in the battle against Shabaab. Independent observers, however, are more cautious.

“It is a sign of things to come,” said Stig Jarle Hansen, a Somalia researcher at the Norwegian University of Life Sciences. “Drones are a way for the Obama Administration to have a light footprint inside Somalia without committing any troops. But I’m not sure they will be effective.”

Peter Pham, Africa director at the Atlantic Council in Washington, said that growing links between Somalia’s Shabaab and Yemen’s Al Qaeda in the Arab Peninsula (AQAP) were a factor behind the decision to use the drones.

“Somalia is moving up the priority list because of developments within Somalia and next door in Yemen. There are increasingly close ties, and therefore Somalia’s strategic importance has increased. With that has come the dedication of resources,” Pham said.

He doubted that the use of drones in Somalia would escalate as dramatically as they have in Pakistan, blaming a lack of good on-the-ground intelligence and the relatively small number of “high value” targets.

David Shinn, a former U.S. ambassador in the Horn of Africa, was also skeptical.

“There’s a debate being had over the utility of drone attacks in Somalia,” he said. “They don’t get you that far, and the targets are not as valuable as in other areas, such as Pakistan.”

Blog: How many drones does it take to kill a terrorist?

While the drones are new to Somalia, targeted assassinations are not.

In May 2008, Aden Hashi Ayro, then the head of al Shabaab, was killed in a U.S. missile strike in the central Somali town of Dusamareb. Then, in September 2009, U.S. Special Forces flying in on helicopter gunships killed Saleh Ali Saleh Nabhan, a man wanted for his involvement in the 1998 embassy bombings in Kenya and Tanzania. His body was picked up close to the town of Barawe and whisked away for DNA analysis.

(Fazul Abdullah Mohamed’s death in June was more about luck than design. The al Qaeda terrorist took a wrong turn in Mogadishu and was shot dead by government troops manning a roadblock.)

Success has not, however, been the norm. Locals resident have accused the United States of killing civilians in botched air strikes in 2006, 2007 and 2008.

There is so far no evidence that the drone strikes in recent months have been effective in killing senior Shabaab leaders, and analysts warn of a “blowback” if civilians are wounded or killed in the attacks.

“Maybe the footprint is not as light as some people would like to make out,” Jarle Hansen said.

“What the U.S. is doing with drones in Somalia and elsewhere is full of pitfalls,” said Daveed Gartenstein-Ross, director of the Centre for the Study of Terrorist Radicalization at the Foundation for Defense of Democracies, a Washington-based think tank.

“In Somalia our intelligence on the ground isn’t great, so you’ll end up killing not just Shabaab operatives but clan leaders, sub-clan leaders — people who you don’t want to kill — as well as civilians, which creates the potential that the U.S. will be seen as an enemy by all sides,” he warned.

In addition Shabaab, has shown a remarkable ability to regenerate when leaders are killed. Jarle Hansen points out that the killing of Ayro in 2008 was little more than “a local setback.” Another commander quickly replaced the Shabaab leader.

The bigger problem is not simply how to defeat Shabaab, but how to rebuild Somalia as a functioning state. For that, the U.S. itself admits that it will need more than military hardware.

“Drone strikes can be a useful as a tactic but not in place of a strategy, and in Somalia we don’t actually have a strategy,” said Gartenstein-Ross.