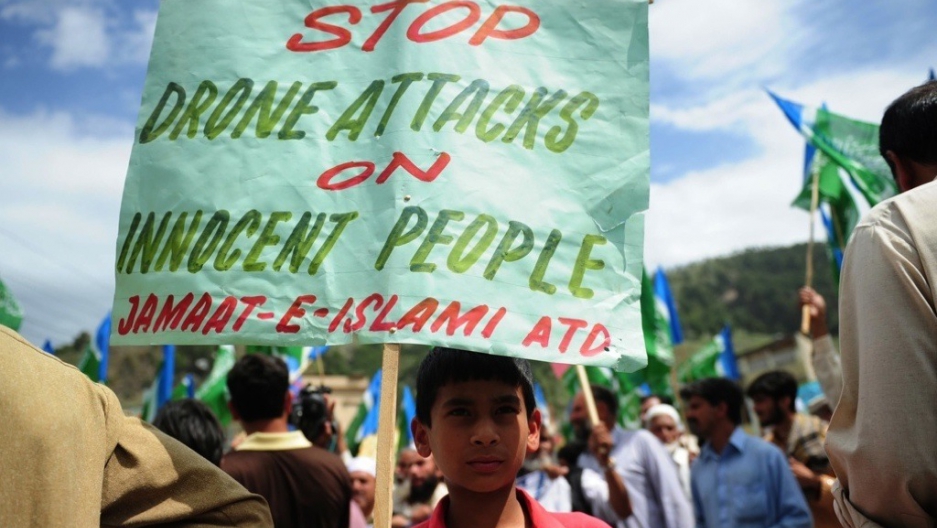 An activist in Abottabad, Pakistan holds a placard during an anti-U.S. protest in May 2011.
Credit: ASIF HASSAN
Share

ISLAMABAD, Pakistan — If Pakistan regularly condemns the U.S. drone attacks on its territory, it hasn’t shown much appetite for stopping them.

Mustafa Nawaz Khokhar, the advisor to the Pakistani prime minister on human rights, proposed last month to report every drone strike to the United Nations Special Rapporteur on Extra Judicial, Summary or Arbitrary Executions, a move that he hoped would force the hand of the United States and bring an end to the strikes.

“I see the drone attacks not only as a violation of Pakistan’s territorial sovereignty, but it’s also plain extra-judicial killing,” he said.

If the Pakistani government approves the recommendation, it would be, to date, Pakistan’s most tangible step in stopping the drones. But that’s a big if.

Since the strikes began to target suspected terrorists in Pakistan’s so-called tribal areas in 2004 — and even after their frequency increased significantly in 2008 under U.S. President Barack Obama — the Pakistani government appears to have quietly allowed them to continue.

“There is a tacit understanding to agree to the drone attacks and to deny the agreement, because the government doesn’t want to go against public opinion,” said one Pakistani official who asked to remain anonymous because of the sensitivity of the matter.

A cable sent by Anne Patterson, the then U.S. ambassador to Pakistan in 2008, supports this claim.

“[Interior Minister Rehman] Malik suggested we hold off alleged Predator attacks until after the Bajaur operation. The PM [Prime Minister Yousaf Raza Gilani] brushed aside Rehman's remarks and said, ‘I don't care if they do it as long as they get the right people. We'll protest in the National Assembly and then ignore it.’”

Many Pakistanis are frustrated by what they view as the widespread presence of the CIA in their country, and are particularly angry with the agency’s use of drones, which have killed an untold number of civilians. It is an attack on Pakistan’s sovereignty by an already deeply unpopular U.S. government, they say.

A survey last year actually found some support for the drones in Pakistan’s Federally Administered Tribal Area, where residents are equally frustrated by militant activity. Almost a quarter of the respondents interviewed by the Community Appraisal and Motivation Program, a nongovernmental agency based in Islamabad, said the attacks were justified if they are properly targeted and avoid excessive civilian casualties.

The closer respondents lived to drone-hit areas, however, the more negative their answers became.

Pakistani officials have repeatedly, and publicly, said that they have done their best to stop the United States from carrying out the unmanned air strikes. There were two resolutions against drone attacks passed by the federal parliament, one in 2008 and one last May.

“Pakistan’s position on the drone attacks, which has been guided by the parliament resolution, has been clearly stated to the United States on a number of occasions,” said Tehmina Janjua, the spokesperson for Pakistan’s foreign ministry. She would not elaborate.

Outside of communicating their displeasure with the drones, there are no other means to put an end to them, said Pakistani Defense Minister Ahmad Mukhtar. Shooting them down would mean an all-out war with the United States, which Pakistan would like to avoid, he said. He also dismissed the suggestion that Pakistan could use its leverage as a transit for U.S. convoys carrying food and other items for American troops in Afghanistan to force the United States to halt its drone program.

“Then there is a very large penalty in terms of humanitarian lives. People do not get food to eat. It is as simple as that,” he said, referring to the American troops.

Blog: How many drones does it take to kill a terrorist?

An attempt to force the government to stop the drone attacks through a court order has also not materialized. The petitioner wants the Pakistani government to implement the two parliament resolutions against drone attacks. Since the case was filed in June the court adjourned several times to give the government more time to responde, which it had asked for. The next hearing is now set for Oct. 13.

The petitioner is Hafiz Saeed, the chief of Jamat-ut-Dawa, a charity the United Nations considers a front for the terror group Lashkar-e-Taiba. Lashkar-e-Taiba is suspected of being behind several attacks, most notably the 2008 Mumbai attacks that killed 166 people.

After the attacks, Saeed, who is also the founder of Lashkar-e-Taiba, was placed under house arrest twice until a court released him in 2009, citing a lack of evidence linking him to the Mumbai attacks. Strengthened by his release,  he's back to making provocative speeches against India, Israel and the United States.

Asad Durrani, the former director of Inter-Services Intelligence and a retired general, doesn’t buy the claim by Pakistani officials that they have done all they can do to stop the drones

“If this is such a serious affair, which I believe it is, then you put your foot down and say ‘no more,’" he said. “Then no cooperation, no nothing.”

But, he said, this is a difficult step that the government is not willing to take. “It is not confident enough that without their [United States] support they can survive. Primarily, the leadership is weak.”

The drones attacks themselves are not necessarily the problem, said Bashir Bilour, a senior minister in the provincial government of Khyber-Pahtoonkhwa, it’s whose finger is on the button. It shouldn’t be the Americans, he said.

“If they want us to give a tough time to the terrorists, they should give us the technology of drones. We would not use it anywhere else, except against terrorists. Otherwise it is an interference of our border,” he said.