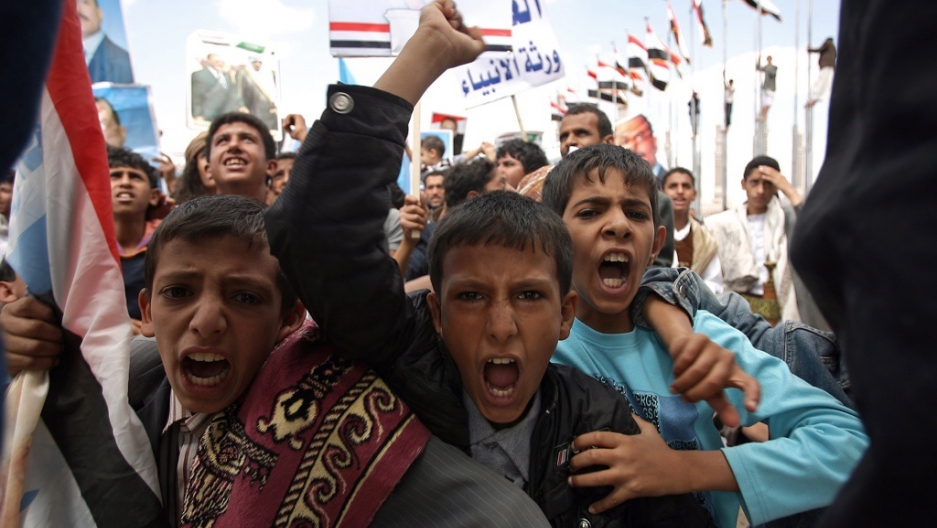 Yemeni boys vent their anger at a rally in Sanaa on Sept. 30, 2011.
Credit: Mohammed Huwais
Share

In Yemen, however, the subject is on everyone's mind.

Although drones have been flying over the country for almost a decade, the frequency of the attacks has increased significantly in recent years. Locals in southern Yemen, where the drone strikes are primarily concentrated, said that these days, the US drones have been bombing on a near daily basis.

The practice of using unmanned aerial vehicles to target suspected terrorists in southern Yemen has had myriad repercussions, beyond just civilian casualties. Local government officials say outside of the psychological impact of hearing the endless buzz of drones flying overhead, they have had an economic impact on the region, and a political one.

Despite the claims of large numbers of civilian deaths, Yemeni President Ali Abdullah Saleh, a controversial US ally in the war on terror, has always supported the drones. As a result — and likely the reason for his continued support, analysts say — the United States remained largely quiet during the massive protests that engulfed the country earlier this year, only backing an internationally-brokered plan for a transfer of power after his security forces opened fire on unarmed activists in Sanaa, Yemen's capital.

Saleh's cooperation with the United States, and his support of the air strikes, has further enraged average Yemenis and is often cited as one of the reasons why millions of people have risen up against his government over the last eight months.

“The Saleh regime allowed the US to intervene and desecrate our homeland from end to end,” said a local politician in the rural village of Muajala, located in southern Abyan Province, speaking on the condition of anonymity. “Yemen has been turned into Afghanistan and its people, either in mountains or valleys, were turned into [members] of Al Qaeda.”

The political repercussions don't stop with the protests.

The Drone Wars: The humans behind the technology

In May 2010, an errant US drone strike killed Jabr Al-Shabwani, the popular deputy governor of Marib Province, in the country's east. Al-Shabwani had been mediating a discussion between militants and the government when the hellfire missile struck. The death of Al Shabwani outraged Yemenis across the country. And the government approval of the drone strikes has stoked separatist sentiments in the south that have plagued the country for generations.

“Our reaction [to the presence of drones] is like any Yemeni’s. It is a violation of Yemen’s sovereignty and a crime committed against the Yemeni people," said Ahmed Al-Shabwani, the deputy governor's brother.

The Al-Shabwani family retaliated, carrying out a series of attacks against the country's oil and power industry, demanding that Saleh stop cooperating with the US drone program.

Yemeni Vice President Abd Rabo Mansur Hadi, in a speech in July, revealed that the United States was providing “logistical” support to the Yemeni military in their operations against militants in the country’s south. Later, after President Saleh returned from Saudi Arabia after being injured in an assassination attempt on his palace, Saleh himself thanked the United States, as well as Saudi Arabia, for their help in fighting militants in southern Yemen.

“The drones fly over Marib every 24 hours and there is not a day that passes that we don’t see them. The atmosphere has become weary because of the presence of US drones and the fear that they could strike at any time. The drones themselves are getting inaccurate information … and that is what happened when they martyred Sheikh Jabr Al-Shabwani,” said Ibrahim Al-Shabwani, another one of the deputy governor's brothers.

“Marib’s sovereignty has been breached. We demand that they [the Yemeni and American governments] give us the truth, otherwise disastrous things will happen to either Americans or Yemenis,” he added.

Although, since no one keeps track, it’s nearly impossible to tally just how many civilians have been killed in drone strikes, local reports put the number well into the hundreds or more.

Days before the attempted Christmas Day bombing of a Detroit-bound jet liner in 2009, the Obama administration authorized a cruise missile strike on Muajala against suspected Al Qaeda militants. Fifty-two civilians were killed in that attack, many of who were women and children.

"There were elements of Al Qaeda about three kilometers away from civilians when the missiles hit,” said Yaslam Al-Anbory, a resident of Muajala, whose relative was killed in the 2009 missile strike. “But the majority of those killed were civilians.”

Locals claim that the drones have been only marginally more accurate. While the US government hails the killing of Awlaki has a major success in the fight against Al Qaeda around the world, Yemenis themselves, who say they have barely heard of the man, are forlorn. They know that with every perceived success, the drone program gains legitimacy. And they are worried that more civilians will be killed.

Today, with little success, some relatives are seeking justice for the loved ones they have lost.

Additionally, the link between the failing Yemeni economy and American drone and missile strikes is a strong one, according to Yemeni political analyst Abdul Ghani Al-Iryani.

For instance, as tribes continue to attack Yemen’s already meager oil infrastructure in retaliation for the death of Jabr Al Shabwani, the economic cost is felt.

“That one drone strike in May of last year has cost Yemen over $1 billion,” he said.