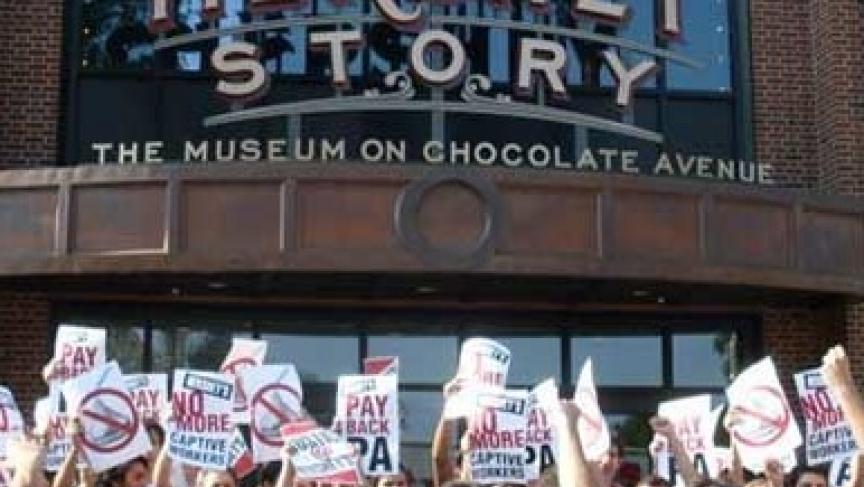 In 1961, at the height of the cold war, Congress created a new cultural exchange program called the J visa program.

The original legislation proclaimed that it would "increase mutual understanding between the people of the United States and the people of other countries by means of educational and cultural exchange."

A noble goal indeed – but today critics say the J visa scheme has largely degenerated into a pipeline for cheap foreign labor.

Cosmin Isvoranu, a mechanical engineering student from Romania, spent the summer in Pennsylvania on the J visa program. He was hoping to see what life is like in America, travel a little and practice his English. There was one other part of the American experience he was really curious about – frat parties.

Instead, he found himself working the night shift at a plant that packs Hershey's chocolates. It was far from the America Isvoranu had expected.

"The work is very hard there, and we couldn't do anything else after – maybe take a shower eat something and go to sleep, that's it. It was terrible," Isvoranu said.

The J visa program, which includes designations J1 and J2, was intended to allow young people from around the world to absorb American values for a few months and then return home to win hearts and minds on behalf of the US. J1 is designated for the worker, the J2 visa allows a foreign national a spouse and dependents.

Daniel Costa, at the non-partisan Economic Policy Institute, says the ideal and the reality don't always mesh. He says the J visa program has become a pipeline for cheap labor and workers are often mistreated.

"You have 300,000 workers come to the US and they're just lacking in protections," Costa said. "Workplace protections, wage protections and we've see complaints where employers have been threatening people who complain about their work conditions with deportation."

In fact, it's even worse than that. In recent years, J1 workers have reported that their stays in the US were characterized by menial jobs, low wages, filthy living conditions, and a lot of economic exploitation.

J1 workers apply for the program and then pay between $3,000 and $6,000 to a sponsoring organization, accredited by the State Department. The sponsor organization places them with American companies. One of the biggest J1 employers is Disneyland.

"They work on rides, quick service food and beverage, housekeeping, parking attendants, merchandising, lifeguards, dispatch, and most importantly showkeepers- those are the janitors," said Kit Jonson, a law professor at the University of North Dakota.

Jonson's been researching the J1 labor force and says it's become a very clever business strategy for American companies. They save on wages, state and federal taxes, healthcare, housing and pension plans."

"For Disney those figures end up being really stunning," Jonson said. "Disney's saving in wages alone upwards of $18.2 million a year in hiring international workers. So international students are simply a lot cheaper than American labor."

Both Kit Johnson and Daniel Costa say that especially now, when unemployment is so high, these jobs should be filled by local workers. But J1 workers are more attractive because on top of the cost savings, they're less likely to put up a fuss. If they do, they're easy to get rid of. Like a group of J1's from Russia who came to work as lifeguards in Texas, and ended up begging in the streets when they weren't paid.

In Pennsylvania, one of the other J1 workers at Hershey's, Zhou Yue, says he understands the desperation of those Russian workers. After six weeks of earning $4 an hour, Zhou and 400 of his fellow J1 workers at the plant had had enough and staged a strike.

Hershey's says it's not responsible for any problems at the plant, which is managed by a contractor, and neither company directly employs the J1 workers. The company that's responsible for them is the Council for Educational Travel USA, or CETUSA.

They're hired by the State Department to bring in J1 workers. And the company's President Rick Anaya says they do keep tabs on students, and of the 6,000 young people they brought into the country this summer, unhappy workers are firmly in the minority.