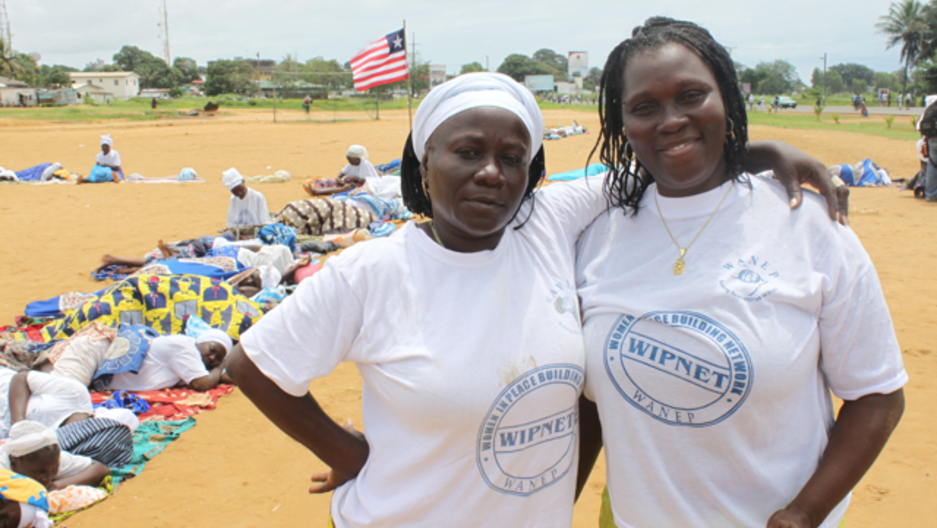 Share
By Bonnie Allen On a sandy soccer field in Liberia's capital, Monrovia, more than a hundred women hold a prayer vigil for a peaceful election. These are the same women who staged a peace movement to end Liberia's civil war in 2003.Their leader was Leymah Gbowee. On Friday, she was named a winner of the Nobel Peace Prize, along with Liberia's president, Ellen Johnson Sirleaf, and Yemeni democracy activist, Tawakkul Karman. As news reached the women in Monrovia, Berniece Freeman celebrated. "Leymah sat on this very field, we started it together, and she got this award," Freeman said. She added that the award is for all Liberian women who sat in the rain and the sun, who were raped, whose families were killed. "So this award is for all Liberian women." More than 200,000 people died in Liberia's civil war. An estimated 70 percent of women experienced some kind of sexual assault during the conflict. The Women in Peacebuilding Network, led by Leymah Gbowee, recruited more than two thousand women to assemble in Monrovia, where they prayed, sang, and fasted for days, dressed all in white. They organized a sex strike. Their message to men – No Peace, No Sex. They eventually got a meeting with Liberia's then-president, Charles Taylor, and called for a ceasefire and peace talks. The war ended shortly after. Two years later, Liberia elected Ellen Johnson Sirleaf, Africa's first democratically elected female president. Today, Cecelia Danuweli, a mother of six, said Sirleaf has given Liberian women pride and dignity. "She has brought us together as women, she has made us realize that what men can do, women can also do," Danuweli said. "She has also given us that motivation to learn, and to go higher in education. All of these women here, they know what their rights stand for. You cannot just trample upon them, no way." In the past six years, Sirleaf has reformed property laws to give women the right to own land; she's introduced tough punishments for rape and increased girls' enrollment in schools. She's also built market halls for women, and rolled out microfinance programs. Sirleaf said she views today's award as a recognition of her long years of as an activist in Liberia, one who advocated for reconciliation and women's rights. "I've paid a heavy price that many people don't realize," Sirleaf said, speaking in Monrovia Friday after the award was announced. "I've gone to prison more than once, at a time that many people did not know of the struggle." Sirleaf added that award sends a signal to Liberians, calling on them to be peaceful and do more for reconciliation. But the timing of the Nobel announcement is provoking controversy at home. It comes just four days before the presidential vote, something that could potentially help Sirleaf win re-election. "I certainly hope so," she said, "and I hope Liberians will see this as a plus. They will see this as a message to them." Sirleaf's challengers have been quick to criticize the prize. Her main opponent, Winston Tubman, called it "a provocative interference" in Liberian politics. "She doesn't deserve this honor," said Tubman in a telephone interview. "I feel it is undeserved because she has brought war here; she is warmonger. She didn't stop the war at all." In a slum of Monrovia, a group of ex-combatants complained today that Sirleaf brought rebels to Liberia. "We don't want anybody who brought war to Liberia," they said. Indeed, Sirleaf has admitted that she gave money to Charles Taylor to launch his rebellion in 1990 to bring down the dictator, Samuel Doe. But Sirleaf maintains she didn't realize that mass atrocities would follow. She has said that if she cast her lot with a war criminal, she did it unwittingly. In 2009, Liberia's Truth and Reconciliation Commission recommended that she be banned from public office for 30 years for her early involvement in the civil war. Today's Nobel Peace prize honors Sirleaf and Gbowee for their non-violent struggle in Liberia for the safety of women and women's rights.